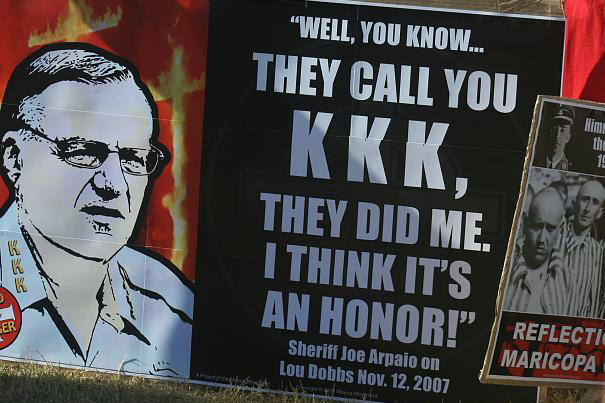 When Maricopa County Sheriff Joe Arpaio tweeted yesterday that he would announce a change in his department’s enforcement of immigration laws, I knew we were in for a ride.

Fresh off a federal court victory that vindicated Arpaio’s decision to force a mentally ill inmate, Eric Vogel, to wear pink underwear under his striped jail uniform, Arpaio’s office announced that the Sheriff, who became a hero of the right for cracking down on illegal immigration in Hispanic neighborhoods, will train all 881 Maricopa County Sheriff’s deputies to make immigration arrests.

This is a sharp rebuke to the federal government, which stripped 100 of Arpaio’s deputies of the right to make immigration arrests in the field last October. At the time, Arpaio vowed to continue his policies regardless of the Justice Department’s instructions. Yesterday’s announcement shows that Arpaio still means business.

Arpaio supporters claim that his tactics preserve states’ rights as guaranteed by the Constitution. But critics say that this is merely an excuse for the Sheriff to implement an anti-immigration agenda that is fueled by racial profiling. “Sheriff Arpaio is a demagogue, and his use of immigration as a pretext to gain notoriety is old news, ” said Chris Newman of the National Day Laborer Organizing Network.

“Good for Joe Arpaio!” says former Sheriff Richard Mack, who now runs the No Sheriff Left Behind campaign urging local Sheriffs to disobey unjust federal orders. “The Sheriffs of this country have an obligation to uphold the law and protect the citizens from illegal immigration. And when the feds don’t do their job, it leaves it to us to clean up the situation.”