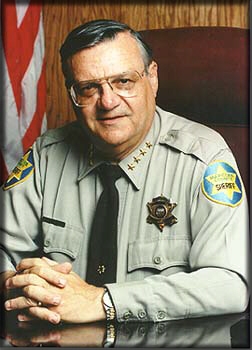 If you read it on the internet, it must be true, right? Unfortunately for America’s most notorious law enforcer—Sheriff Joe Arpaio of Maricopa County, Arizona—no. Arpaio has been basing controversial immigration crime sweeps on a fake law downloaded from the internet and touted by anti-immigrant organizations. Last week, Immigration and Customs Enforcement signaled that they would strip Arpaio and his department of the power to make immigration arrests in the field. Arpaio responded by saying that he would continue busting immigrants as planned on the authority of state laws. Fake state laws. The Arizona Republic reports:

However, the interpretation actually originated on the Federation for American Immigration Reform Web site and has been reposted by anti-immigrant and border-control groups. Washington, D.C.,-based FAIR opposes immigration, legal and illegal. The Southern Poverty Law Center has designated the organization as a hate group, which FAIR vehemently denies.

Among other falsehoods, the interpretation states that reasonable suspicions that a person is in the country illegally include “evasive, nervous, or erratic behavior; dress or speech indicating foreign citizenship; and presence in an area known to contain a concentration of illegal aliens.”

Alessandra Soler Meetze, executive director of the ACLU of Arizona says that Arpaio has a troubling history of twisting the law to his advantage. For example, Arpaio relies on state employer sanctions and anti-smuggling laws to justify his raids, she told me. Regarding the employer sanction laws, Arpaio routinely raids predominantly Latino businesses, asking all employees to produce detailed documentation to prove their legal status, a move that smacks of racial profiling. And Arpaio’s use of anti-smuggling laws is suspect because “he arrests you and charges you with conspiracy to smuggle yourself, which strips you from your right against self-incrimination,” Meetze says.

Maricopa County Attorney General Andrew Thomas has so far stayed mum on the legality of the downloaded interpretation. This is not surprising because, as Jennifer Allen of the Tucson-based Border Action Network explains, Maricopa County has an anti-immigration “triumvirate of power” that includes Arpaio, Thomas, and state Sen. Russell Pierce. “Pierce writes the legislation, Thomas interprets it as broadly as possible, and Arpaio is the implementer.” None of them, it appears, is the fact-checker. We’ll have to wait and see if even the use of fake immigration laws can derail this invincible crime fighting team.