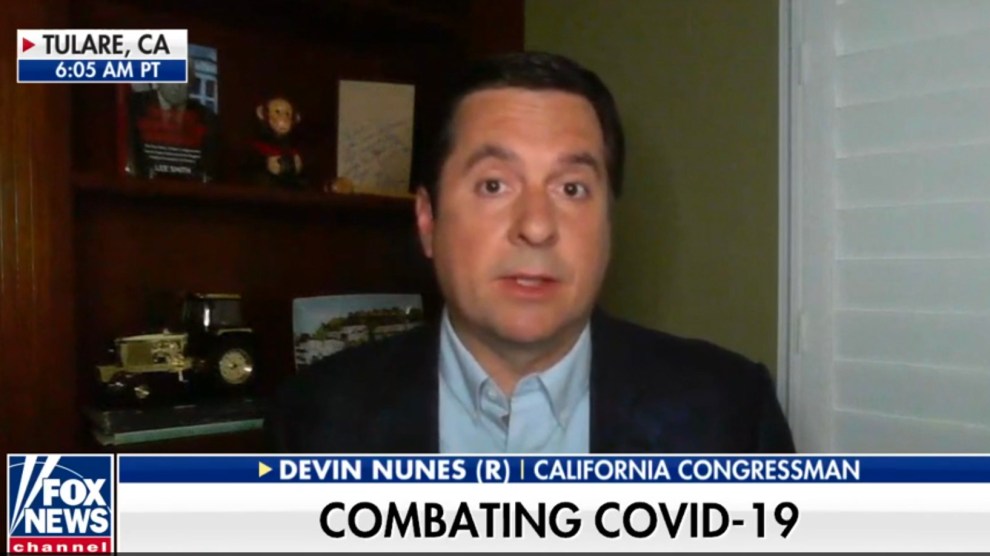 In the latest installment of misinformed, offensive comments from politicians during the pandemic, Rep. Devin Nunes (R-Calif.) went on Fox and Friends Sunday morning and described his state’s homeless population as a “zombie apocalypse” of “criminals,” while falsely suggesting they had extra protection against coronavirus because they live outside.

“The situation out here in California with the homeless population is quite dire—that was before the coronavirus,” Nunes said. “It’s almost like zombie apocalypse…You’ve seen the pictures.”

“I’ve got several thousand just in my district,” the California congressman added. “It’s largely due because we let our criminals out. So we pass laws that let multiple convicted drug abusers out. Now look, unfortunately, a lot of these people—I call it zombie apocalypse, because a lot of these people have done drugs for a long period of time. You know, they’re just not well.”

“One of the positive things in all this,” he continued, “is if you’re outside in the outdoors, you’re social distancing, we haven’t seen it run through homeless population—at least, that we know of yet—like we’ve seen, to my earlier point, in these group homes with older people that have underlying health conditions.”

You can watch the full segment over at Fox here; the relevant exchange starts around the 3:30 mark. Or here’s a clip:

(This is, by the way, the same congressman who last month scoffed at the advice to social distance when he told Fox viewers that the pandemic was a “great time to go out and go to a local restaurant” because “likely you can get in easy.”)

It’s hard to know which part of Nunes’ comments are most offensive—comparing families without homes to corpses come back to life, or seeming to say that people who struggle with addiction should be incarcerated for the rest of their lives. While it’s true that California has a large population of unhoused individuals, and that a majority of them were incarcerated before becoming homeless, locking people up for decades for nonviolent crimes will only fuel mass incarceration and do little to ease the underlying poverty and poor medical care that force people to sleep on the streets.

And suggesting that homeless people are in some ways lucky to sleep outside during the pandemic is also contrary to everything that public health experts are saying right now. Homeless people are actually at a higher risk of serious complications to the virus—both because they tend to have preexisting health conditions that haven’t been treated, and because they can’t follow orders to isolate themselves indoors. California is now trying to house hundreds of homeless people in hotel and motel rooms around the state as part of its emergency response. “Homeless Californians are incredibly vulnerable to COVID-19 and often have no option to self-isolate or social distance,” California Gov. Gavin Newsom said in a statement Friday.

“It’s never been as clear as it is right now that housing is health care and our collective health depends on our ability to stay at home,” Diane Yentel, who leads the National Low Income Housing Coalition, told my colleague Nathalie Baptiste. “If we don’t have homes to stay in we put people at an immediate and extreme risk, and we risk the health of entire communities. As long as there are people who don’t have homes to isolate in, we are not truly containing this pandemic.”