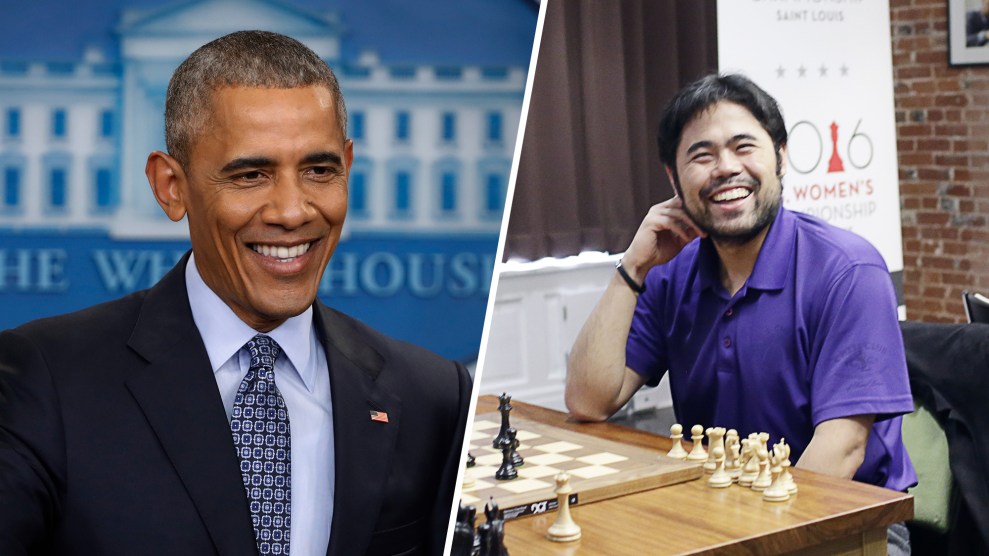 It was only a matter of time before Hikaru Nakamura, the US chess champion and the world’s best and fastest blitz player, challenged former President Obama to a benefit match for the Biden Victory Fund. Nakamura issued the call yesterday, inspired by Alexandria Ocasio-Cortez playing “Among Us” to mobilize voters in one of the most-watched Twitch streams of all time. Obama’s answer is pending. I’ve reached out to the former president to see if he’ll accept. Don’t hold your breath, but do hold hope—there’s precedent: Thomas Jefferson wrote about chess in his diary and sent letters about playing Benjamin Franklin before selling some chess books to James Monroe. James Madison played. John Quincy Adams played.

As did Abraham Lincoln, Ulysses S. Grant, Rutherford Hayes, James Garfield, Grover Cleveland, William Howard Taft, Warren Harding, Theodore Roosevelt, Jimmy Carter, and Bill Clinton. Chelsea Clinton plays (and has online). At 10 years old, Nakamura became the youngest US player named a master and, at 15, the youngest to reach the game’s top title. No biggie; preparation tip, President Obama: Memorize a crushing answer to Nakamura’s noted bongcloud opening and you’re fine. I’ll sweeten the deal. The winner of Nakamura vs. Obama gets to play my colleague Ben Dreyfuss, who runs the Mother Jones Daily newsletter (forward it or sign up here) and, according to lore, is an unparalleled chess mind. The winner of Nakamura-or-Obama vs. Dreyfuss gets to play me. I studied as a kid with Bobby Fischer’s coach and competed on that team with Joshua Waitzkin of Searching for Bobby Fischer before quitting for baseball, but have since returned (to middling chess adequacy).

Come through, President Obama. Nakamura needs you. Democracy needs you. “Amtrak Joe” needs you. As a student and scholar of strategy, tactics, and theory, you’ve got a fair shot against Nakamura. Never mind that Fischer said “the object” of chess “is to crush the opponent’s mind.” It’s not. And Garry Kasparov still competes but he’s more into politics these days, and I’ll handle Kasparov if he gets out of line in the comments. If you, readers, feel the heat and want to see Obama stomp Nakamura in the name of voter mobilization, forward this and tag @GMHikaru and @BarackObama; just don’t tag @HansenChess, or chairs might fly.

P.S. There are more possible chess games than the number of atoms in the universe.