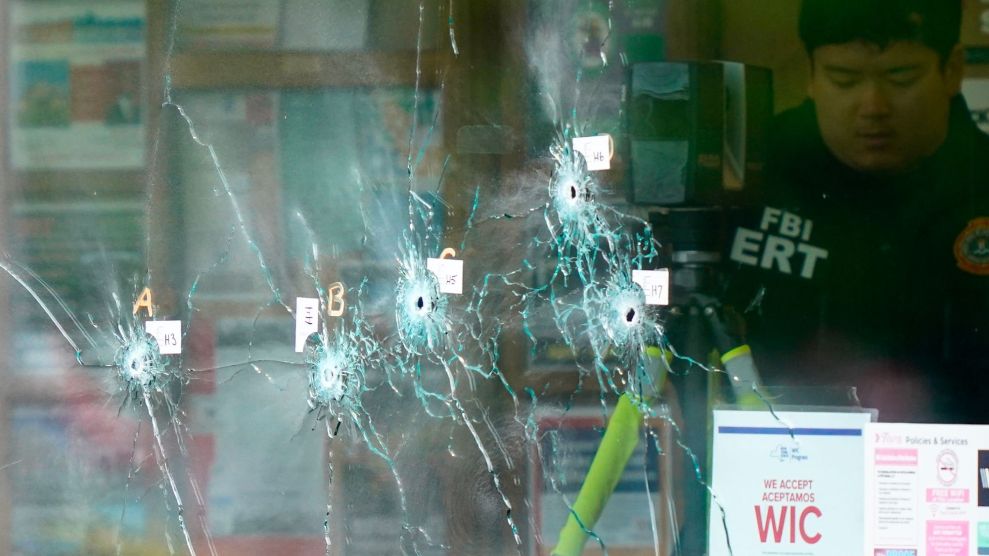 An investigator works at the scene of the Buffalo mass shooting.Matt Rourke/AP

The massacre at a Buffalo supermarket on Saturday that left 10 people dead and three others injured was the latest in a repugnant trend of violent far-right extremism.

The 18-year-old suspect, Payton Gendron, made clear in targeting victims in a predominantly Black neighborhood that he was emulating other mass shooters: He live-streamed his attack using a body camera in similar fashion to a gunman who murdered dozens of Muslims at mosques in New Zealand in 2019. Gendron also allegedly detailed his racist intent in a lengthy document he posted online that espoused “great replacement” theory. That bigoted conspiracy theory—versions of which have been spread by top Fox News pundits and Republican politicians—claims that white Americans are losing their country to a nefarious plot welcoming an influx of immigrants and people of color.

Gendron had a history of disturbing behavior, according to law enforcement authorities, including a threat he made in June 2021 to commit a suicidal school shooting. Under New York law, he was taken into custody by state police and given a psychiatric evaluation. The results are not publicly known, but Gendron was released within two days, officials said. After he graduated high school, according to the account that authorities say he posted, he spent months becoming radicalized online and preparing for his attack. He acquired weapons and tactical gear and surveilled his target, a common warning behavior among mass shooters.

As I’ve reported in previous investigations, violent far-right extremism surged in the United States during Donald Trump’s presidency and has grown deadlier since converging with the mass shootings epidemic. The violence has included lethal rampages targeting Latinos at a Walmart in El Paso, Texas, and Jews at synagogues in San Diego and Pittsburgh. Political polarization that continued to deepen after the January 6 insurrection, combined with record gun sales during the pandemic, raised further concerns among experts.

Political extremism fueling grievances and despair in troubled people has become a more urgent focus in recent years for leaders in the emerging field of behavioral threat assessment, the subject of my new book, Trigger Points: Inside the Mission to Stop Mass Shootings in America. The ways in which Trump and his political allies demonized “enemies” were nothing new, but their brazen tactics catalyzed a resurgence of ideological hate and a rise in the threat from domestic terrorism. This stark shift in mainstream American politics has profound consequences, experts in the field told me:

Threat assessment leaders typically are stoic in the face of tumultuous current affairs, but after an intense 2020 election year battered by a politicized pandemic, several top experts I spoke with described feeling deeply unsettled by the way dehumanization and themes of existential social war had become normalized in American politics. As one of them put it, “History shows how bad it can get when you really start convincing people that differences of opinion or political affiliation are coming from ‘enemies’ to be feared and despised because they’re threatening to destroy your way of life.”

Political demonization and unhinged conspiracy theories [have been] percolating in fringe subcultures, with social media forming an ever more interconnected pathway to radicalization, according to forensic psychiatrist Philip Saragoza, a threat assessment practitioner with expertise on incels and other extremist groups. “One thing we emphasize in trainings is how cross-linked these categories have all become,” he told me, describing the growing pattern. “You have these disaffected young males who live online, and they’ll wade into a community on 4Chan or 8Chan, and in one thread they’ll find all kinds of misogynistic content from manosphere groups that’s also wrapped up with MAGA movement politics, QAnon, or ‘great replacement’ and other racist conspiracy theories. It’s a real hive of choices, almost like à la carte extremism.”

When Gendron was a high school senior, he said he wanted to commit a murder-suicide at the school, according to authorities, but then claimed he was “joking.” This is a common behavior among school shooters—including the accused perpetrator of the massacre last November at Oxford High School in Michigan. In a recent investigation, I documented how that attack, like many planned mass shootings, was preceded by an astonishing array of warning signs and could have been prevented.

In the face of such dark events and horrific loss of life, it’s important to emphasize that we can and must do better as a nation. The work extends from battling against hateful political extremism and strengthening gun laws to taking greater action in communities throughout the country to stop mass shootings before they happen.