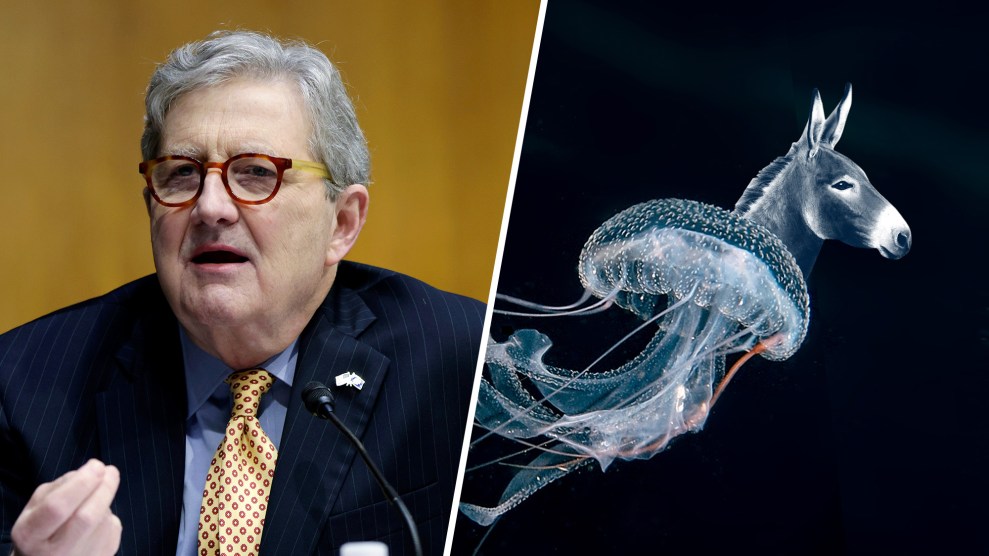 I’m on a lot of Republican and conservative email lists. Call it research. So every day, I receive fundraising solicitations from Republican candidates, right-wing advocacy groups, and, of course, Donald Trump. They are almost always dire: the Democrats—or the libs or the radicals or antifa or Black Lives Matter or the media or Hollywood—are poised to destroy America As We Know It. And they can only be stopped if I make a donation within the next hour or by midnight tonight. Better yet, my contribution will be matched 300 percent, or 500 percent, or 1000 percent, or 1200 percent by….someone else. In many cases, if not most, this is a meaningless ploy or, worse, a false promise.

The essence of most of these emails is demonization, depicting political foes as dangerous knaves or sinister forces who are hellbent on pushing socialism, or communism, or critical race theory, and/or government control over you, your health care, your money, your family, your whatever. They want to take your guns away. They want to brainwash your children. They want to kill God—or maybe just Christmas.

There’s nothing new about this. The far-right began pioneering this scare-’em-and-shake’em-down tactic with direct-mail fundraising in the 1960s that grew out of Barry Goldwater’s presidential campaign. In the 1970s, Richard Viguerie, who had become the right’s direct-mail king, was raising millions of dollars a year for an assortment of New Right organizations by developing massive mailing lists and targeting small-donor conservatives with fundraising letters delivered through the postal service. (He’s still at it today.) As Terry Dolan, the founder of the National Conservative Political Action Committee and a key New Right player, observed in the late 1970s, “The shriller you are, the better it is to raise money.” The solicitations Viguerie zapped out for NCPAC and other groups, Dolan noted, were aimed to “make them angry” and “stir up hostilities.” Howard Phillips, a former Nixon administration official who became a key figure in the New Right, described the approach succinctly: “Organize discontent. That is our strategy.”

He could have just said, “Exploit hate.” Sure, fundraising on the left these days also relies on dramatic claims and seeks to exploit concerns about Republican and conservative malfeasance. But the pitch on the right has been far more hysterical, incendiary, and nasty over the past five decades. A culmination of sorts can be seen in Donald Trump’s fundraising emails—I get several a day—that contain apocalyptic rants about his political enemies. One recent email exclaimed, “All the Democrats want to do is put people in jail. They are vicious, violent, and Radical Left thugs.” He added, “I’ve been trying to tell you, David Corn, this is what happens in communist countries and dictatorships.” (Trump also specializes in trying to wheedle money out of his marks with cheesy premiums: calendars, membership cards, floor mats. This week, you can have “PRIORITY ACCESS” to an “incredible” Trump pint glass—for a mere $30!)

“All the Democrats want to do is put people in jail…I’ve been trying to tell you, David Corn, this is what happens in communist countries and dictatorships.”

The fundraising firehose spews endless requests, creating one huge pile of false and malicious gimme-gimme-gimme pleas. But every once in a while, a particular email stands out for its simplicity and mendacity. So let me tip my hat to Sen. John Kennedy (R-Louisiana) for crafting a solicitation worth noticing. It appeared in my inbox on Christmas Day, with this subject head: “Jellyfish have more brains than the liberals.”

Hmmm, I thought, I wonder where this will lead? The answer? Nowhere, actually. The email began, “I have hope for my Liberal friends…jellyfish have survived for more than 165 million years without a brain, so there is hope for a few of them.” And…that was the pitch. There was no (phony) argument over any issue. Nothing like the liberals are ruining our schools and want to outlaw hamburgers! Or now they’re trying to cancel Mr. Potato Head and Dr. Seuss. Nor was there a reference to anything in the news: Not inflation, vaccine mandates, or supply chain problems. The only thing this missive contained was a playground taunt: liberals are really stupid. “If you are on my team,” Kennedy wrote, “and have a brain, unlike the DC Radicals, then I’m asking for a quick donation to get us situated for this month.”

Does Kennedy’s team really believe that it can squeeze money out of GOP rubes by merely comparing liberals to brainless jellyfish? Damn straight they do. After receiving this email, I searched my inbox and discovered I had received an identical request from Kennedy in September. The end of the year is prime time for fundraising emails. (Which is why you may be getting an email or two from Mother Jones, a nonprofit journalism organization.) That means that folks angling for your contributions tend to deploy what they believe are their most effective and compelling asks. The fact that Kennedy’s money-squeezers returned to the “jellyfish” bit is an indication this particular strategy previously raked in a decent amount. Call a lib a jellyfish, and watch the bucks pour in.

Kennedy’s “jellyfish” email doesn’t bother presenting a cogent case. You hate liberals. I am a US Senator and will call them names. You will give me money. Rinse, repeat. It hardly gets more infantile and tribal than that and embodies lots that’s terrible about today’s Trumpified GOP. After all, Kennedy is a stalwart member of the slash-burn-and-insult club. You might recall that last month during a Senate confirmation hearing for Saule Omarova, President Joe Biden’s Soviet-born pick to be comptroller of the currency, Kennedy snidely said, “I don’t know whether to call you professor or comrade.”

But let’s return to jellyfish. It is true they have no centralized nerve center that can be called a brain. Instead, they possess two nervous systems. One network controls swimming; the other is in charge of everything else. “Jellies are like the original computer networks, with little servers all along the margin of their body that they use cooperatively,” Rebecca Helm, a researcher at Woods Hole Oceanographic Institute, told PBS’ Nature. “They have a net of cooperative nerve bundles that talk to each other.” Given that jellyfish have been around for more than an estimated 500 million years—pre-dating dinosaurs by about 250 million years—they certainly show that you don’t need a sophisticated and well-developed brain to succeed. And if you were adopting the fundraising tactics of Sen. John Kennedy of Louisiana, you might say the same of him.