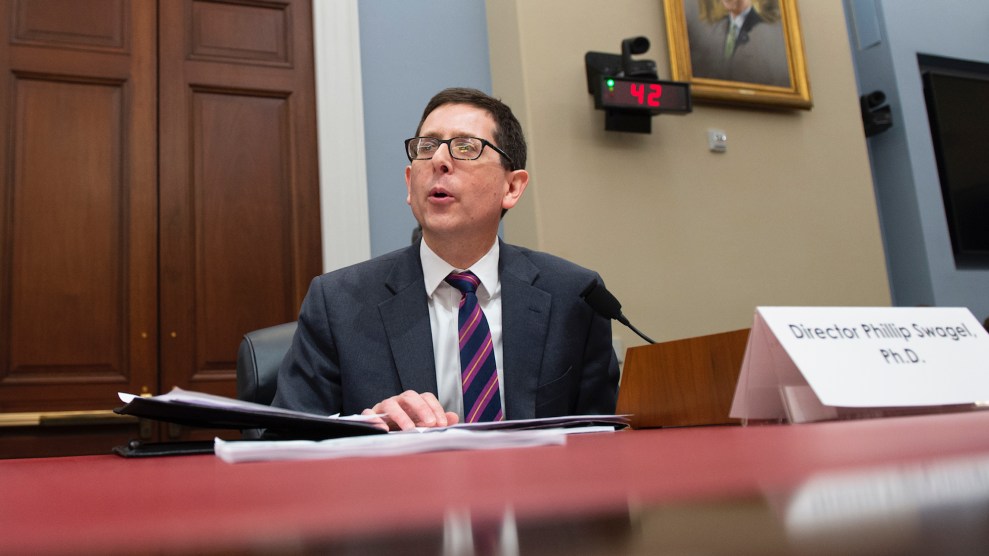 President Joe Biden unveiled a $2.25 trillion jobs and infrastructure plan last month and has promised to seek input from Republican lawmakers on its ultimate design. That courtship begins Monday when Biden and Vice President Harris meet with a bipartisan group of House and Senate members to discuss the proposal. But his administration has already signaled its willingness to push a bill through Congress with only Democratic votes, a route subject to the byzantine rules of the budget reconciliation process that could muck up Biden’s agenda.

Behind closed doors, Democrats in Congress are considering a drastic move to make their push around those rules easier: Fire the director of the Congressional Budget Office, the scorekeeping agency that measures the federal budget impact of pending legislation. The interest stems from some Democrats’ disappointment over the CBO’s recent scores of the party’s top priorities and a desire to see the office led by an economist willing to give Democrats the scores they’re looking for to push Biden’s agenda over the finish line. Such a move would make the ostensibly nonpartisan office a wonky pawn in the three-dimension chess game Democrats hope to play to push Biden’s agenda over the finish line.

The move is being deliberated among Senate Democratic staff, according to several senior Democratic sources, with some outreach to progressive House members. Staffers for the Senate Committee on the Budget, which is chaired by Sen. Bernie Sanders (I-Vt.), have already provided Senate Democratic leadership with a list of potential replacements for the role.

Removing the CBO director is just one aspect of a larger plan Democrats are hatching to pass Biden’s agenda in a narrowly divided Congress, where the party holds the majority by just one vote. In addition to using reconciliation to get much of it over the finish line, the Senate parliamentarian recently signed off on Senate Majority Leader Chuck Schumer’s (D-N.Y.) request to revise budget bills to include pieces of Biden’s jobs plan—essentially opening the door for Democrats to pass bills with a simple majority at least three more times between now and the 2022 midterms.

The CBO’s purpose is to provide Congress with analyses of bills’ fiscal considerations as well as projections of broader economic trends. Its current director is Phillip Swagel, who was appointed to a four-year term in June 2019. Prior to his job at the CBO, Swagel had worked in the conservative world of economists, having served as an assistant Treasury Secretary under President George W. Bush, where he oversaw policies relating to the financial crisis, and held various roles on Bush’s Council of Economic Advisors. He has also held roles at the American Enterprise and Milken Institutes, two conservative think tanks. Swagel’s CBO nomination was spearheaded by then-Senate budget committee Chair Sen. Mike Enzi (R-Wyo.) through an informal arrangement in which the House and Senate Budget chairs alternate leading the selection process—though Swagel also earned praise from the House’s budget chair, Rep. John Yarmuth (D-Ky.).

The CBO drew some Democrats’ ire during the first weeks of the Biden administration when it determined that raising the minimum wage to $15 an hour would increase the federal deficit by $54 billion and lead to 1.4 million job losses over 10 years. Sanders was especially vehement in excoriating the report, finding it “hard to understand” how the CBO reached such a conclusion about the deficit and job losses. He cited analyses from the University of California Berkeley and the left-leaning Economic Policy Institute that determined the opposite. (The Senate parliamentarian ultimately deemed the $15 minimum wage proposal ineligible for consideration under reconciliation.)

Some Democrats have taken the minimum wage report as a sign of how Swagel’s office will evaluate other liberal proposals and are mulling whether a left-leaning economist would look more favorably on the party’s agenda. There’s particular worry over whether the CBO will give Biden’s American Jobs Plan, which aims to invest $2.25 trillion over eight years, enough credit for raising revenues and contributing to economic growth, which might boot some of their top priorities from being eligible for reconciliation. The CBO is also likely to continue to raise concerns about rising interest rates and crowding out private investments if Congress doesn’t act to tamp down the deficit—even though that hasn’t happened as a result of the trillions in deficit spending Congress has authorized over the course of a pandemic. The concerns speak to a broader tension that’s emerged in Washington economics in the first months of the Biden administration: Democrats’ embrace of big government and deficit spending defies the conventional wisdom of balanced budgets and highly targeted social programs, wisdom to which both parties had previously subscribed.

Firing the CBO director might not have any meaningful impact on how the office scores bills. The directors’ backgrounds often reflect the preferences of the party that nominates them, but directors maintain they suspend any partisanship while serving in the role. The CBO’s mission is “strictly nonpartisan,” and it produces “objective, impartial analysis,” according to the office’s website, and the agency “hires its employees solely on the basis of professional competence without regard to political affiliation,” and they conduct the brunt of the office’s analysis work. (When asked for comment, a spokesperson for the CBO pointed to sections of its website describing the agency’s methodology and how it maintains impartiality in its work.)

While the CBO never makes policy recommendations and has stressed its scores are just one factor to consider in evaluating a bill’s potential, its reports carry extraordinary weight on Capitol Hill. And though economics strives to paint itself as a science, it’s not, governed more by a consensus view rather than foolproof predictions of the future. “The CBO attempts to reflect the mainstream positions in economics and policy analysis, and I think it’s done a good job of doing that,” says Paul Van de Water, a senior fellow at the left-leaning Center on Budget and Policy Priorities who worked at the CBO during the 1980s and 90s. But those mainstream positions have irritated some Democrats, who think its processes don’t sufficiently account for policy’s potential long-term savings. The CBO does not, for example, take into account the cost savings associated with preventive health initiatives, nor the potential benefits of reduced carbon emissions when evaluating climate-related legislation. That’s one reason the Congressional Progressive Caucus negotiated with House leadership to exempt any climate-related bills from the “paygo” provision that requires any legislation that would increase the deficit to be offset by commensurate spending cuts.

Blaming the CBO for reaching politically inconvenient conclusions has been a rich bipartisan tradition. Republicans called for the office to be abolished in 2017 when one of its reports found the GOP’s attempts to repeal the Affordable Care Act would cost the government hundreds of billions of dollars. In response, all of the CBO’s former directors fired back with a letter to express their “strong objection to recent attacks on the integrity and professionalism of the agency.” At the time, House budget Chair Yarmuth defended it against the GOP’s attacks. “In this world where things have become increasingly partisan, it’s not perfect, but I think it’s the closest we have to a neutral arbiter,” CBPP’s Van de Water says. “It’s important to maintain that and avoid making it look partisan when it’s actually trying to do its job.”

Swagel’s term isn’t set to end until 2023, and removing a director requires either the House or Senate to pass a resolution. Given Democrats’ narrow majority in the Senate, that responsibility would likely fall on the House, and Yarmuth would lead the selection of Swagel’s replacement. Since Democrats control both chambers of Congress, the two budget chairs would be free to choose whoever they’d like without GOP buy-in.

But whispers among Senate staff may be where this effort stops. “Chairman Yarmuth supports Director Swagel,” a spokesperson for Yarmuth wrote in an email. “We have not discussed and are not considering a replacement.”