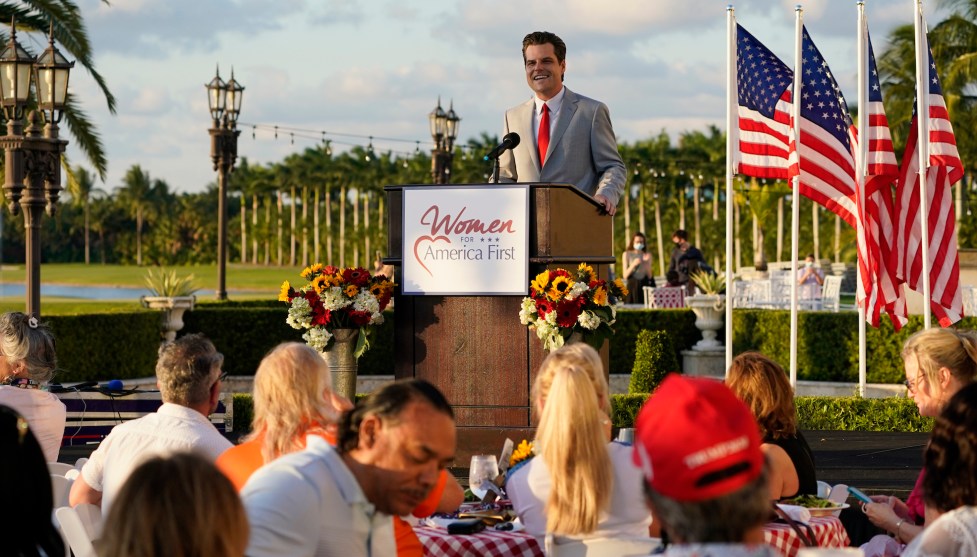 Hours after the House Ethics Committed opened an investigation into him, embattled Rep. Matt Gaetz (R-Fla.) defiantly refused to admit wrongdoing and portrayed himself as a victim of left-wing “cancel culture” in a speech before Trump supporters in Florida on Friday.

It was Gaetz’s first major appearance since the news broke last week that he is under federal investigation for potentially violating sex trafficking laws, including offering gifts or money in exchange for sleeping with underage girls. “I’m built for the battle, and I’m not going anywhere,” Gaetz said at Trump National Doral Miami, the private club owned by the former president, at an event hosted by—wincingly—Women for America First, a conservative group. “The smears against me range from distortions of my personal life to wild—and I mean wild—conspiracy theories.” (On Jan. 6, Gaetz voted to overturn the presidential election results in Arizona and Pennsylvania following the insurrection at the Capitol based on wild conspiracy theories about widespread voter fraud.)

In declaring his innocence, Gaetz cast himself as yet another victim of the culture wars, saying in Trumpish fashion that he would not “be intimidated by a lying media.”

“I may be a canceled man in some quarters,” he told roughly 50 Trump supported, described as largely maskless by the New York Times. “I may even be a wanted man by the deep state. But I hear the millions of Americans who feel forgotten, canceled, ignored, marginalized, and targeted.”

But Gaetz’s personal and legal troubles continue to escalate. He’s under Justice Department investigation for allegedly paying an indicted sex trafficker to arrange for him to sleep with underage women. And on Friday the House Ethics Committee opened an investigation into a litany of allegations, including whether Gaetz “engaged in sexual misconduct and/or illicit drug use, shared inappropriate images or videos on the House floor, misused state identification records, converted campaign funds to personal use, and/or accepted a bribe, improper gratuity, or impermissible gift, in violation of House Rules, laws, or other standards of conduct.”

On Thursday Rep. Adam Kinzinger (R-Ill.) became the first GOP member of Congress to call on Gaetz to resign. “Matt Gaetz needs to resign,” Kinzinger tweeted, linking to a Daily Beast story describing how Gaetz paid $900 to an indicted sex trafficker, who the next morning sent the same amount to three young women.