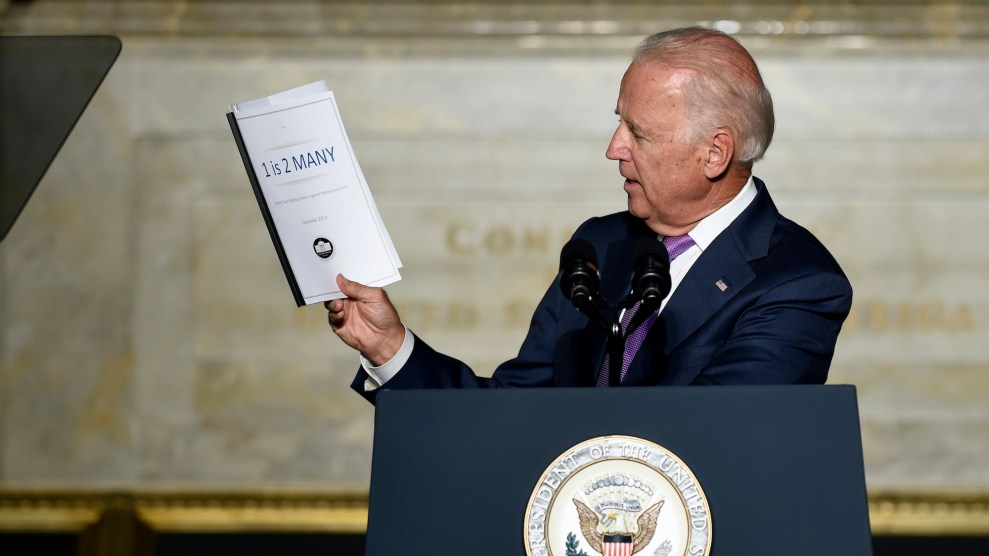 Vice President Joe Biden holds up a report as he speaks at the National Archives in Washington to commemorate the 20th Anniversary of the Violence Against Women Act, Tuesday, Sept. 9, 2014. Biden said violence against women is the ugliest form of violence there is. He's calling it a stain on America's national character that must be exposed and eliminated. (AP Photo/Susan Walsh)Susan Walsh/AP

Three years after Republicans in Congress allowed the Violence Against Women Act to expire, Democrats have introduced an expanded version of the landmark legislation. But some Republicans’ initial objections to provisions concerning gun control and trans rights leave the fate of the bill uncertain.

Rep. Sheila Jackson Lee (D-Texas) introduced the Violence Against Women Reauthorization Act of 2021 on March 8. The bill expands on legislation first passed in 1994 to improve the criminal justice response to domestic violence and sexual assault and provide funding for victims’ services, as well as training, prevention, and law enforcement programs. This reauthorization is so far cosponsored by 168 Democrats and two Republicans, but other Republicans in Congress are finding new ways to attempt to undermine it.

In a statement, Rep. Jackson Lee said the Violence Against Women Act and its subsequent reauthorizations have “ushered in a seismic transformation on how society perceives violence against women.” President Joe Biden sponsored the original legislation as a senator and is now urging “Congress to follow past precedent and bring a strong bipartisan coalition together for swift passage of VAWA.”

The last reauthorization to extend VAWA for five years expired in 2018. Although the House passed bipartisan legislation during the last Congress with the support of 33 Republicans, the GOP-controlled Senate allowed it to lapse. Among the sticking points for Republicans was a provision to end the so-called “boyfriend loophole” by expanding the the provision that prohibits perpetrators of domestic violence from purchasing guns to include dating partners and stalkers. The NRA fiercely opposed the provision, which it called “a gun-control poison pill,” and lobbied against the bill.

This year’s version keeps that provision in place, while also expanding survivors’ access to housing and extending “the jurisdiction of tribal authorities over non-Indians who commit a crime in Indian country,” among other new protections. Rep. Deb Haaland (D-N.M.), who was just confirmed by the Senate to lead the Interior Department as the first Native American Cabinet secretary, is one of the cosponsors of the bill.

Everyone deserves to feel safe & have access to justice when they experience violence. We need a full & enhanced #VAWA to provide more permanent protections for all survivors. That’s why I’m a cosponsor. https://t.co/PXUsTubbtP

While Democrats and advocates for survivors of domestic and sexual violence are pushing for VAWA to be reauthorized quickly in light of the significant increase in domestic violence in the United States during the pandemic, some House Republicans have already geared up to undermine provisions of the bill involving gun control and trans rights.

Rep. Kevin Hern (R-Okla.) has led the fight on both counts. First, he submitted an amendment to replace all “gender identity” and “sexual orientation” language with “biological sex.” He has also proposed adding “findings included in a study by Pew Research Center on gun ownership increases” where women cited “personal protection as the primary reason for obtaining a gun.” (Other studies have shown that firearm possession can put women at greater risk for violence.) He would like to include a sentence saying that VAWA can’t take away a person’s constitutional right to bear arms “based on an allegation where such person does not have the opportunity to contest such allegation.”

Other Republicans have joined the fray. Rep. Paul Gosar of Arizona proposed an amendment to authorize grants to train survivors on how to use firearms. Rep. Debbie Lesko or Arizona, a survivor of domestic violence but a critic of trans rights, suggested a change to prevent service providers “from being compelled to place a woman or child into a circumstance in which they fear for a violation of privacy or safety.” In 2019, Lesko had defended a similar proposal by arguing that it wasn’t “fair to women” that the government was “forcing these organizations to take in biological males to be sleeping right next to biological women.” Rep. Mark Green of Tennessee wants to stipulate that organizations that provide services exclusively “to women based on sex at birth” can’t be prevented from receiving grants. QAnon enthusiast Rep. Marjorie Taylor Greene (R-Ga.) proposed an amendment to strike a severability clause ensuring that even if parts of the legislation are deemed unconstitutional, the rest should still stand.

The Democrats have complete meltdowns over kids in cages.

But next week the Democrats want to pass a law that would allow children to be raised in PRISON!

The so called Violence Against Women Act is actually violent against children!

If the bill passes in the Democratic-led House, it still faces the prospect of a filibuster in the Senate, which Democrats could only overcome with the backing of at least 10 Republicans.