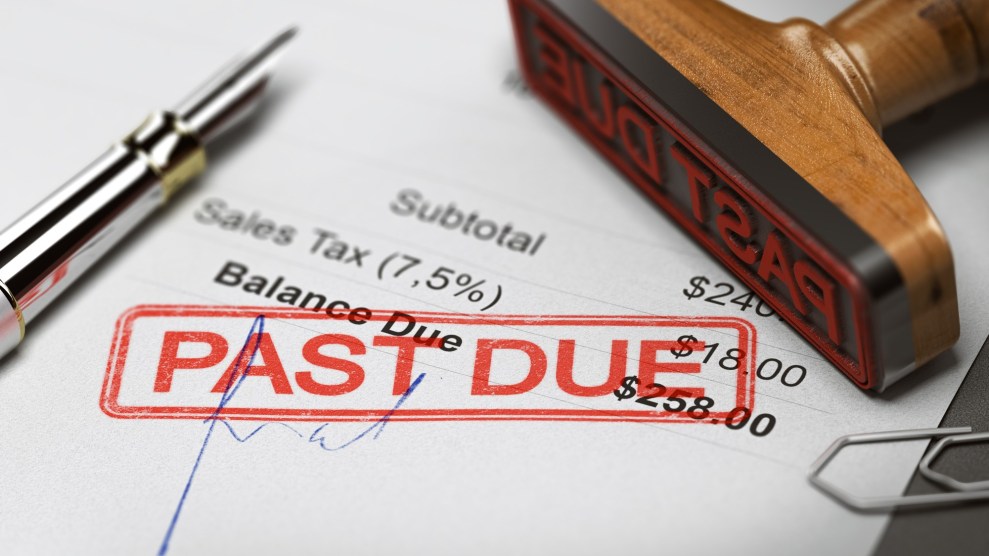 The House passed a $1.9 trillion COVID relief package on Wednesday, and President Joe Biden is expected to sign it this week, ushering in a sweeping set of programs to aid Americans battered by the pandemic. The package includes expanded unemployment benefits, rent relief, a temporary allowance for families with children, and $1,400 stimulus checks.

But thanks to a quirk of the legislative rule-making process, those $1,400 checks could disappear from millions of Americans’ bank accounts. That’s because there is nothing in the bill to stop debt collectors from seizing stimulus checks to pay off private debts.

The last COVID relief package, passed in December, included protections to stop debt collectors from garnishing stimulus checks. But the first relief bill, enacted last spring, did not, and some collectors seized stimulus payments from people with debts—a worrisome sign for this next round, which is even more targeted to low- and middle-income households.

“Last year, some of the major debt collection organizations said that they would not try to garnish stimulus payments,” says Lauren Saunders, associate director at the National Consumer Law Center. “But we know that it happened. We saw a number of headlines, and we heard from a number of consumers who had their payments garnished.”

Those most at risk are people who have a debt collection judgment against them, explains Saunders. These types of judgments are particularly byzantine: The majority are issued without the borrowers present, either because they weren’t notified of the case or because they didn’t have the funds to fight it. Tens of millions of American households—disproportionately people of color—have debts in collection.

If a debt collector has obtained a judgment against a consumer, the collector can now issue an order requiring a bank to turn over stimulus money as soon as it hits someone’s account.

Many states have rules about how much money can be garnished from someone’s account and require a proportion to remain for living expenses. That makes a moment when large stimulus checks are being deposited nationwide a particularly opportune time for debtors to collect.

Several states have passed laws to protect COVID relief money from being seized. But federal lawmakers did not include this protection in the package currently headed to Biden’s desk. That’s because it would likely have been thrown out due to something called the “Byrd rule.” To avoid having to overcome a filibuster with 60 votes in the Senate, Democrats passed the relief bill using a process known as budget reconciliation. The Byrd rule stops lawmakers from tacking on measures to reconciliation bills that won’t directly affect the budget. It’s quite likely that a provision protecting stimulus checks from seizure by debt collectors would have been thrown out under this rule, explains Saunders.

The result is that debt collectors could start seizing stimulus checks as soon as they start going out—which could be in a matter of days. Sen. Ron Wyden (D-Ore.) said on Tuesday that he would introduce separate legislation to shield stimulus checks from garnishment.

“The first set of payments were not protected,” Saunders says. “The second payments were. And the third set will not be unless Congress immediately—and I really mean immediately—passes a new bill, because the payments could start going out any day now.” This week, the National Consumer Law Center and 18 other financial services and consumer protection groups sent a letter to House and Senate Leaders urging swift passage of a standalone bill that would protect stimulus checks from seizure by debt collectors.

A spokesperson for Wyden said that he would introduce legislation “soon” but did not give an exact timeframe. Over the summer, Wyden and his colleague Sen. Chuck Grassley (R-Iowa) introduced a bipartisan bill to shield money from the first round of stimulus from garnishment. It passed the Senate with unanimous approval, and senators urged the House to pass an identical version. But the House had already proposed a second relief package, the HEROES Act, which included new stimulus checks and protections from garnishment.