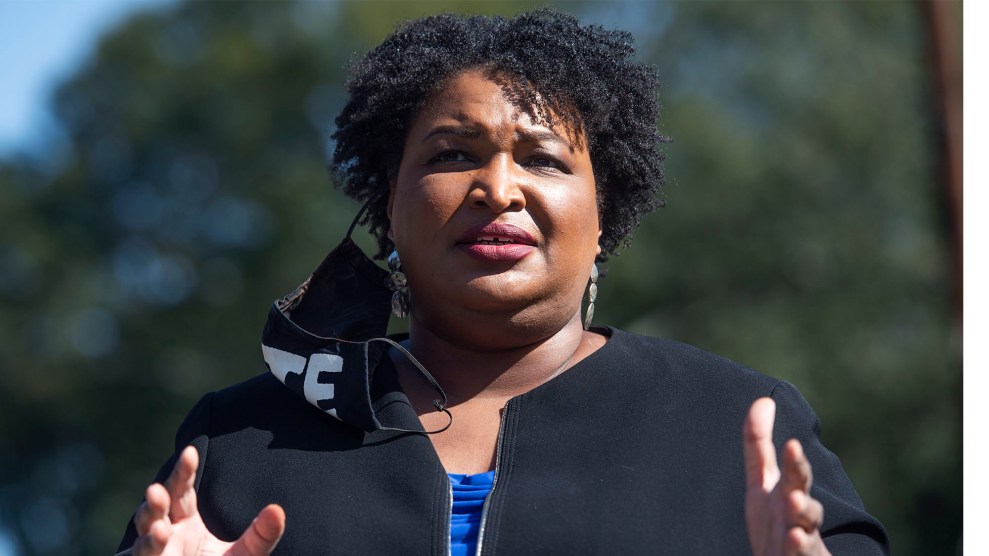 As Republicans in the Georgia state legislature passed a series of voting restrictions over the past 10 days, Stacey Abrams, the state’s leading voting rights activist, saw an ever more pressing need to reform the filibuster in the US Senate. And she has a plan for how to do it.

The Georgia legislation and the Senate rules might seem unrelated, but to Abrams, the Democratic gubernatorial nominee in 2018 and founder of the voting rights group Fair Fight Action, they’re directly connected. “Republicans are rolling back the clock on voting rights,” she says. “And the only way to head that off is to invoke the elections clause of the Constitution, which allows the Congress—and the Congress alone—to set the time, place and manner of elections at a federal level.”

The problem is that Republicans will surely use the filibuster to set an impossible 60-vote threshold for any such effort—and that two centrist Democratic senators, West Virginia’s Joe Manchin and Arizona’s Kyrsten Sinema, have said they oppose abolishing the filibuster. That’s why Abrams proposes tweaking it to allow major voting rights legislation to pass, and she thinks her plan can get reluctant Democrats on board.

In the same way that Democrats can pass budget bills and confirm judges and Cabinet members with a simple majority, legislation protecting voting rights should also be exempt from the 60-vote requirement, Abrams says.

“The judicial appointment exception, the Cabinet appointment exception, the budget reconciliation exception, are all grounded in this idea that these are constitutionally prescribed responsibilities that should not be thwarted by minority imposition,” she says. “And we should add to it the right to protect democracy. It is a foundational principle in our country. And it is an explicit role and responsibility accorded only to Congress in the elections clause in the Constitution.”

I spoke to Abrams on Monday, just hours before the Georgia Senate repealed no-excuse absentee voting, part of a series of bills passed in recent days to restrict voting rights that Abrams called “Jim Crow in a suit and tie.”

“This isn’t about retribution or revenge,” Abrams says. “This is about protection of the fundamentals of our nation.”

Abrams testified before the House in late February in favor of HR 1, the most ambitious democracy reform bill since the Voting Rights Act, which would boost voting access through policies like automatic and Election Day registration, early voting, and expanded voting by mail. “It’s the reform we need that will provide protection, provide a foundational level of access, regardless of your geography,” she says. She also urged passage of another House proposal, the John Lewis Voting Rights Advancement Act, which would require states with a history of discrimination to once again get federal approval for any changes to voting laws and procedures, after the Supreme Court struck down this requirement from the 1965 Voting Rights Act in 2013. The measure is needed, she says, “to make certain we don’t watch [voting rights] be butchered or eviscerated.”

But neither bill will pass the Senate if Democrats don’t eliminate the filibuster, which Abrams calls “a racist procedural rule that is grounded in this notion that the minority must be protected unless we disagree with what the minority needs.”

I asked Abrams what she would say to Democrats like Manchin and Sinema to persuade them to go along with a “democracy exception” to the filibuster.

“This isn’t about retribution or revenge,” Abrams says. “This is about protection of the fundamentals of our nation, that if we do not protect the participation of voters in our election system, if we do not permit states to do what they must to protect their voters, then we will find ourselves losing our democratic values, losing our democracy. And so I would say to Democrats who are hesitant that short of completely revising the filibuster, we have to make certain that a minority of people cannot be in power in the Senate, and therefore deny the basic principles of citizenship to millions of Americans.”

Sen. Jeff Merkley (D-Ore.) has floated a similar idea, and an increasing number of Democratic senators are now expressing openness to eliminating the filibuster, especially for bills like HR 1.

“I would get rid of the filibuster,” Amy Klobuchar, the chair of the Senate Rules Committee and a member of the Senate Democratic leadership, told me on March 3, when the House passed HR 1. “I have favored filibuster reform for a long time and now especially for this critical election bill.”

Manchin said on Sunday he’s open to changes to the filibuster, such as forcing Republicans to continuously occupy the Senate floor to block bills. And if Republicans keep passing restrictions on the right to vote, a proposal like Abrams’ could start to find a broader consensus.