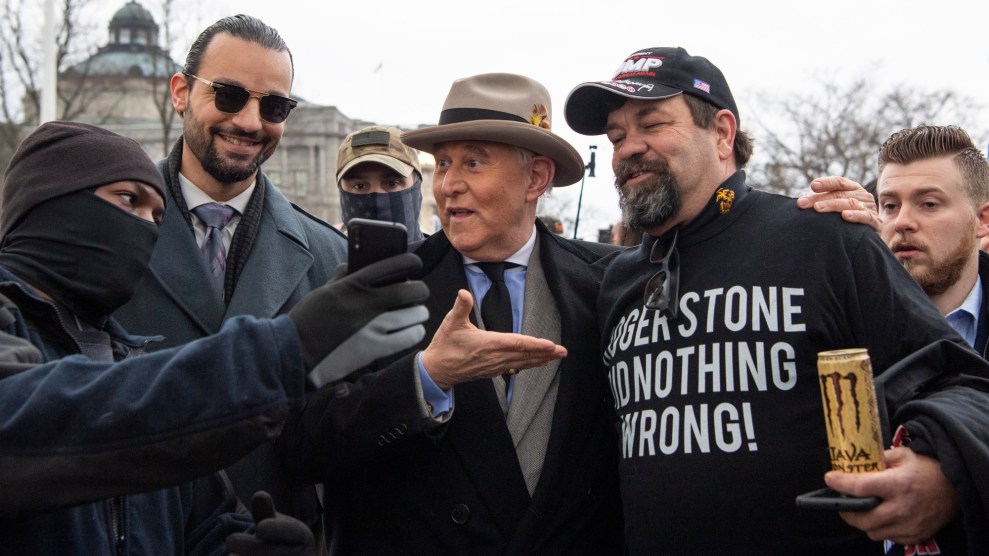 In recent days the FBI arrested two men, Joshua James, the owner of a cleaning services company in Alabama, and Roberto Minuta, a Newburgh, New York, tattoo artist, for taking part in the seditious attack on the US Capitol. Both men are members of that far-right militia. They each were part of a group of Oath Keepers that provided security for Stone, the longtime Trump adviser, the day before the assault, when Stone was in Washington, DC, whipping up support for the January 6 protest. That brings to at least five the number of Oath Keepers arrested in relation to the attack who also appear to have guarded Stone at Stop the Steal events. The Justice Department has alleged that three of these militia members helped plan the Capitol onslaught and were part of a conspiracy to block Congress from certifying Joe Biden’s victory.

This could create legal problems for Stone, a self-described political dirty trickster, who last year received a pardon from President Donald Trump related to his conviction for lying to Congress in 2017 during the Trump-Russia investigation. Prosecutors are reportedly investigating Stone’s communications with extremists involved in the Capitol attack. The arrested Oath Keepers will likely face pressure to cooperate with prosecutors and reveal any information they may possess about any involvement Stone or other Trump associates may have had in plans or preparations to invade the Capitol.

Stone has repeatedly denied having advance knowledge of the attack. He says he was not present at the January 6 rally held at the Ellipse and that he did not participate in the ensuing march on Congress by thousands of Trump supporters. He also maintains that he did not know the Oath Keepers who provided security for him at events in Washington, DC, and in Florida in the weeks before the attack.

The Oath Keepers—a loosely organized far-right outfit composed of former law enforcement officers and military personnel—provided security for Stone at several events on January 5. And Minuta and James were part of that detail, which possibly included about a dozen members of the group. Minuta was arrested on Saturday in Newburgh, where last May he gained notoriety for refusing to follow COVID-19 restrictions and close a tattoo parlor he owns there. James was arrested Tuesday in Alabama. Both face charges related to entering the Capitol on January 6.

The New York Times has reported that at least four other members of Stone’s January 5 security detail entered the Capitol the next day. Those four have not been publicly identified or charged.

Oath Keepers connected to Stone have also been indicted for allegedly being part of a plot that led to the attack on the Capitol. In mid-February, prosecutors charged three Florida Oath Keepers with participating in a conspiracy “with others known and unknown to obstruct the United States Congress’ affirmation of the Electoral College vote regarding the results of the 2020 U.S. presidential Election.” Two of these Oath Keepers—Graydon Young and Connie Meggs—apparently acted as security guards for Stone at a Stop the Steal rally near Tampa, Florida, on December 14. The third, Kelly Meggs (who is married to Connie) appeared to have been a member of an Oath Keeper security detail for Stone in Washington on January 5.

Prosecutors say this conspiracy, aimed at keeping Donald Trump in office, began in November after his defeat. So far, a total of nine Oath Keepers have been charged in this case.

Kelly Meggs, the manager of a car dealership in Lake City, Florida, claimed in a Facebook post last year that he had been named the Oath Keepers’ “lead” in Florida. According to prosecutors, he provided security at a January 5 event outside the Supreme Court at which Stone and other Trump supporters spoke. The conspiracy complaint against him and the others includes a Getty Images photograph of Meggs “standing guard” outside the Supreme Court.

Video and photographs provided to Mother Jones by the Capitol Terrorists Exposers, an online group that has been combing through images of the attack to help identify the perpetrators, show Kelly Meggs—who is wearing the same sunglasses and clothing seen in the picture in the complaint—acting as part of a security detail escorting Stone as he left that January 5 event.

In addition, video provided by the Capitol Terrorist Exposers appears to show that Connie Meggs and Young were part of a five-person security detail for Stone at the December 14 Stop the Steal rally in Florida.

At this event, Stone, standing on the back of a flatbed truck, spoke for about 40 minutes to a crowd of a few hundred people. It was held in the parking lot of Conservative Grounds, a pro-Trump coffee shop. As Stone entered the event, a man who matches images of Young posted by the FBI walked protectively behind Stone. A woman wearing an Oath Keepers shirt, who matches public images of Connie Meggs, entered the event ahead of Stone and took a position in front of the makeshift stage while he spoke. That can be seen in the first 30 seconds of this video:

Attorneys for Young declined to comment. David Wilson, a lawyer representing Connie and Kelly Meggs, says he had seen images showing his clients appearing to provide security for Stone but could not comment on “what they did or may have done” for Stone. Wilson says he is not aware of prosecutors asking about his clients’ ties to Stone, noting that “it’s a little early in the process for that,” given that they have yet to enter pleas. He said they will plead not guilty.

A court filing submitted on Tuesday by Wilson says that Kelly Meggs is awaiting a court appearance in Washington, while Connie Meggs is “languishing” in federal custody in Orlando due to her inability to remove her wedding ring. According to the filing, “when Mrs. Meggs was taken to the Jacksonville International Airport, she was denied boarding of the aircraft because she was wearing her wedding ring, which apparently cannot be removed past the knuckle on her ring finger.” Officials at the jail where she has been held have “refused to cut the ring from her finger,” the filing says.

Stone and his attorney did not respond to questions about any ties to the Meggs and Young. In a February 10 post on his website, Stone acknowledged relying on a volunteer security detail comprised of Oath Keepers on January 5 and “at three previous rallies in Miami and Tampa.” But he suggested he had only a fleeting connection to his security guards. Stone did not describe how he connected with the Oath Keepers other than noting that the group “came forward to voluntarily provide free security for me.”

“I do not know Mr. Minuta nor was I familiar with his name prior to his being identified in earlier media stories where it was alleged that he was involved in illegal events up at the Capitol,” Stone said in a statement Monday. “If he was indeed among those who volunteered to provide security while I visited Washington DC I was unaware of it.”