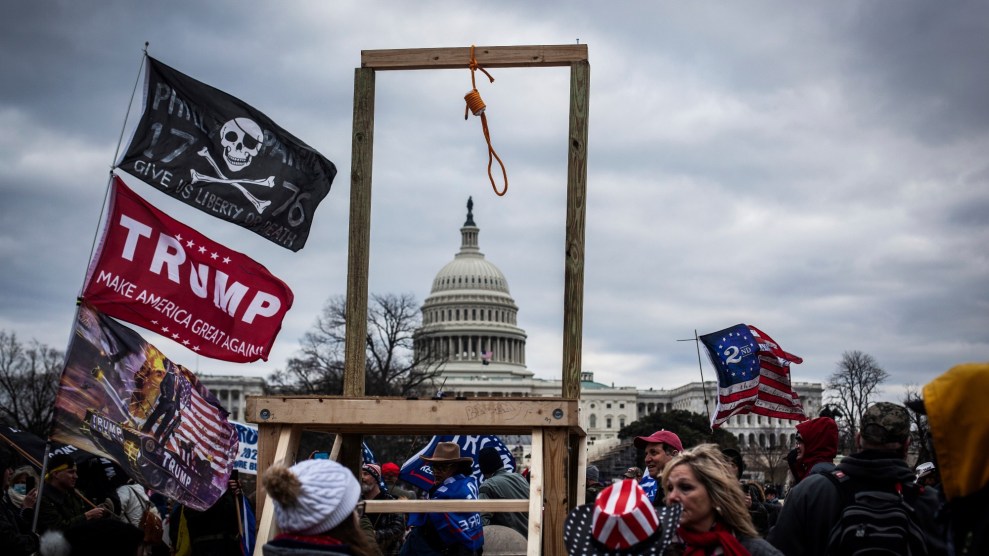 During a Senate hearing on Tuesday examining the January 6 attack on the US Capitol, former security and law enforcement officials largely blamed a lack of proper intelligence for being unprepared. But, according to one former security official who testified, the FBI had sent out an intelligence report days before the 6th that detailed the high probability of right-wing violence that could take place on the Capitol. But that report somehow never reached the top officials who had the authority to properly act on it.

During the joint hearing by the Senate Homeland Security and Government Affairs and Senate Rules Committee, former US Capitol Police Chief Steven Sund, who resigned under pressure in the immediate aftermath of the insurrection, said that it was “a clear lack of accurate and complete intelligence” that led to the breach of the Capitol, and “not poor planning by the Capitol Police.” But he also revealed to lawmakers that it wasn’t until after the attack that he learned his officers had received a report from the FBI that detailed specific calls for violence around the Capitol on the 6th. Sund said that it was only in the last 24 hours before the hearing that he learned from the FBI that the USCP had actually received their report.

According to the Washington Post, the FBI’s field office in Norfolk issued an explicit warning to law enforcement agencies that violent extremists were preparing for a “war” in DC on January 6th. Sund explained to lawmakers that an officer on the task force formed to handle the protest on the 6th had received the memo and forwarded it to a sergeant who was working intelligence for the USCP, but that the memo wasn’t made aware to him or any other supervisors. “How could you not get that vital intelligence?” Sen. Gary Peters (D-Mich.), who chairs the Senate Homeland Security Committee, asked Sund incredulously.

It’s one of several intelligence and operational failures that Sund, along with the former House and Senate Sergeants at arms, testified was to blame for the lack of preparedness for the mob of violent right-wing extremists who breached the Capitol that day. Sund also said that he talked to former Senate Sergeant at arms Michael Stenger and House Sergeant at arms Paul Irving—both of whom also resigned in the aftermath of the 6th—about requesting National Guard troops to assist with crowd control, but that Irving said he was worried about the “optics” of having troops present. Irving bristled at that accusation, calling Sund’s account “categorically false” and explained that the intelligence reports that they had seen led them to collectively decide that they didn’t think National Guard troops were necessary. “We all agreed the intelligence did not support the troops and collectively decided to let it go,” Stenger said.

Tuesday’s hearing is the first of several planned investigations into the security and operational failures that led to the deadly breach , in which five people were killed, including a Capitol police officer. Sen. Amy Klobuchar (D-Minn.), who chairs the Senate Rules Committee, asked pointed questions to the witnesses about the security failures that contributed to the deadly breach of the Capitol. “There is a clear agreement that this was a planned insurrection and that there was an intelligence breakdown,” Klobuchar said in her closing statements, noting it’s “very disturbing on both ends.” Elsewhere during the hearing, Sen. Ron Johnson (R-Wisc.), who was one of Donald Trump’s most ardent backers in pushing dangerous election fraud conspiracy theories, used the hearing as an opportunity to continue to push conspiracy theories, reading excerpts from a column that suggests many of the rioters were actually antifa provocateurs who staged the insurrection. (Klobuchar later told reporters that Johnson “seems to be in denial and somehow wants to blame everyone but President Trump for inciting this.”)

Last week, House Speaker Nancy Pelosi (D-Calif.) announced plans to establish an independent 9/11 commission-style panel to investigate what, exactly, led to the events of January 6, including if any law enforcement officers were complicit in allowing the insurrectionists into the Capitol.

News of the formation of that commission inspired Sen. Josh Hawley (R-MO.)—who for months helped spread conspiracy theories about the 2020 election and led the Republican effort to block certification of the votes that fueled the violent mob on the 6th—to point blank ask Sund, Irving, Stenger, and Acting Metropolitan Police Chief Robert Contee if they were complicit in aiding the riot. They all said that they were not. No one posed the same question to Hawley.