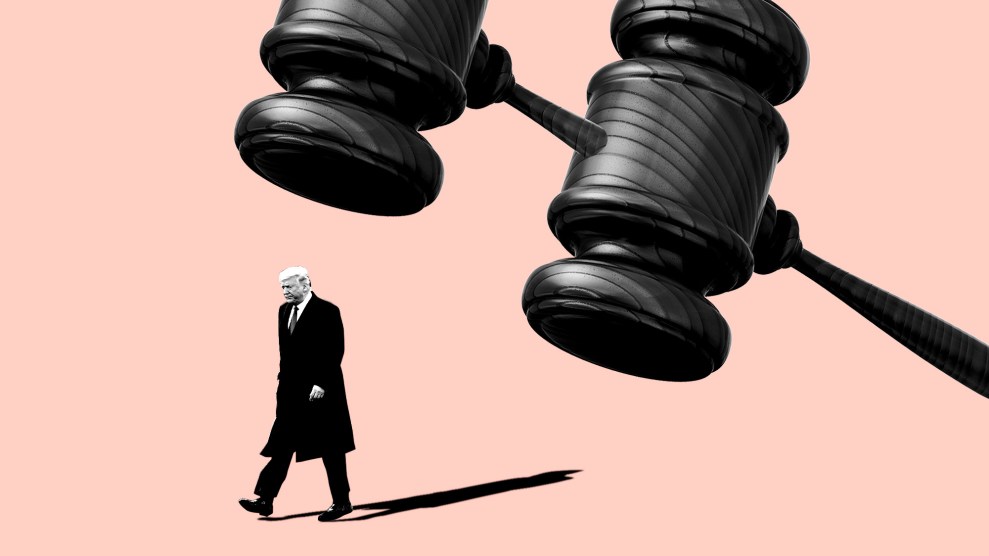 The former president’s lawyers, who are set to deliver their defense today, are expected to largely stick to the claim that the Senate trial is unconstitutional because Trump is no longer in office. As my colleague Pema Levy noted, that’s a pretty weak argument, and most constitutional scholars have rejected it. Still, Republicans hellbent on acquitting Trump have made this dubious contention the basis of their opposition to Trump’s impeachment trial. The defense also plans to focus on the First Amendment and reject claims that Trump incited violence with his “Stop the Steal” rhetoric.

As for the prosecution, House impeachment managers have been widely hailed—even by some Republicans—for their exceptionally sharp presentation over the past three days. Their case for conviction featured never-before-seen video footage that underscored, in both frightening and emotional terms, the harm of Trump’s actions and how greater tragedy was only narrowly averted. Follow along for updates below:

6:25 p.m. ET: That concludes the question-and-answer session. The Senate is now applauding Officer Eugene Goodman, who helped guide Sen. Mitt Romney (R-Utah) to safety on Jan. 6 and led the mob away from the Senate chamber. The Senate unanimously voted to award him the Congressional Gold Medal, the highest honor Congress can bestow.

A standing ovation for Officer Eugene Goodman, shortly before being awarded the Congressional Gold Medal.

His heroic acts on January 6th are recounted moment-by-moment in the thread below 👇👇👇 https://t.co/lGojMyMJmv pic.twitter.com/HJicx8qQbC

The Senate will adjourn at 10 a.m. ET tomorrow. Thanks for following along.

Trump’s defense lawyer says this trial is among his “most miserable” experiences in Washington. Some members of Congress might beg to differ. 👀 pic.twitter.com/WrV2zHTsLt

6:05 p.m. ET: Arguing that Trump’s Jan. 6 speech was not the sole factor contributing to the insurrection but rather the culmination of a prolonged campaign to rile his base, Stacey Plaskett took on a lighter tone: “Most of you men would not have your wives with one attempt at talking to her.”

5:24 p.m. ET: Van der Veen did not like being asked by Sen. Bernie Sanders (I-Vt.) whether he thought Trump actually won the election.

“My judgment?” Trump’s attorney replied. “Who asked that?”

Michael van der Veen on question about who won the election: "My judgement? Who asked that?"

Senator Bernie Sanders: "I did."

Michael van der Veen: My judgement's irrelevant in this proceeding."

4:45 p.m. ET: Did you notice all the clips the defense played of Black women protesting police brutality? And how that was supposed to be a bad thing, comparable to people storming the Capitol? Stacey Plaskett did.

.@StaceyPlaskett hits the defense for playing "clip after clip of black women talking about fighting for a cause or a policy" in drawing a false equivalency with Trump's words.

4:32 p.m. ET: Michael van der Veen is now contending that “at no point was the president informed that the vice president was in danger,” and that the question is irrelevant to the charge of incitement of an insurrection. It seems hard to square that response with his failure to say when the president knew an insurrection was taking place.

Astonishingly, Trump's lawyers falsely claim: "At no point was the president informed that the vice president was in danger."

Tuberville has said on the record that he told Trump on the phone in their phone call that Pence was being ushered out.

Del. Paskett says "The reason this question keeps coming up [what Trump did once he knew the Capitol was breached] is because the answer is nothing."

4:12 p.m. ET: Trump’s lawyers appear unable to answer when Trump first found out about the breach of the Capitol and what he did to stop it. My colleague Pema Levy wrote about the implications of that non-answer here.

Trump’s lawyers are citing his tweets as to when he first heard about the riots. and they’re blaming the House managers for not investigating it. Trump’s their client.

Trump's lawyer, Michael Van der Veen was just asked part of the below. He could not answer. So Trump's attorney does not know basic facts of the case: when Trump learned of the breach and what he did in response. Incredible.#ImpeachmentTrial pic.twitter.com/IdPtho1AtV

4:00 p.m. ET: The Senate will now take up to four hours of written questions, with a maximum of five minutes allotted for each answer.

3:15 p.m. ET: Castor just showed a supercut, under dramatic music, of politicians saying they aimed to prevent Trump from running for office again. “The goal is to eliminate a political opponent,” he said, “to substitute their judgment for the will of the voters.” He keeps saying that the trial is about “cancelling” the voters who cast their ballots for Trump, as if their candidate didn’t lose fair and square.

2:30 p.m. ET: Castor is now up—with a better fitting suit—and rejecting the label of “insurrection” for what happened on January 6. He’s also replaying the same video footage from before.

CONFIRMED: A source close to House Managers tells me that David Schoen was not telling the truth when he said Trump’s lawyers had not been given the new video evidence of the Capitol attack. That person says trial rules required giving Trump lawyers the videos before the start.

1:00 p.m. ET: As we reported earlier, Trump’s defense is now playing a video montage of Democrats using the word “fight” to downplay Trump’s long record of inciting violence. It’s an incredibly disingenuous tactic. But also just embarrassing and very long. Let’s take a look at how the video is being received:

This is the stupidest legal argument that's destined to succeed that I've ever seen.

I’m waiting for “Fight Song” to come on

One of my friends is making a valiant fight against cancer. I pray for him and his family.

I also note I used the word “fight.”

Trump’s defense team has now one-upped that by falsely accusing extremists of “various different stripes and political persuasions” were behind the pro-Trump Capitol attack last month when countless pieces of video evidence, charging documents, and law enforcement assessments rebut that bold lie. But with a defense so weak that debuted dead on arrival, who can afford to care about the truth?

12:15 p.m. ET: Taking a page out of his client’s playbook, Trump’s lawyer Michael van der Veen is up first arguing that the trial is a “witch hunt.” He’s also playing a video montage of Trump declaring law and order to reject the accusation that the former president has promoted violence. What a perfect time to read my colleague Nathalie Baptise on what conservatives really mean when they call for law and order.

Trump lawyer Bruce L. Castor Jr. suggested he was still contemplating changes to the lineup shortly before the defense team was set to begin arguing its case.

In a text message at 10:45 a.m., asked whether lawyer David Schoen would speak on Friday, Mr. Castor said he was “wrestling” with that question. “We have to decide what is best for the case,” he said.

10:20 a.m. ET: We’ve got more details on what Trump’s lawyers are going to be presenting today, including plans to falsely compare Trump’s violent rhetoric to Democratic politicians who have urged voters to “fight.” Not only is that disingenuous, as my colleague Dan Friedman notes, Trump’s lawyers also already botched their own argument earlier this week.

9 a.m. ET: Despite his widely-panned, incoherent debut on Tuesday, Bruce Castor is still expected to have a speaking role today. Get the popcorn ready.

Jason Miller makes clear on Newsmax that Bruce Castor WILL have a speaking role today. He says his arguments are “crisper” and “tighter” and adds that the defense team reviewed their plan with Trump last night. They will go about four hours.