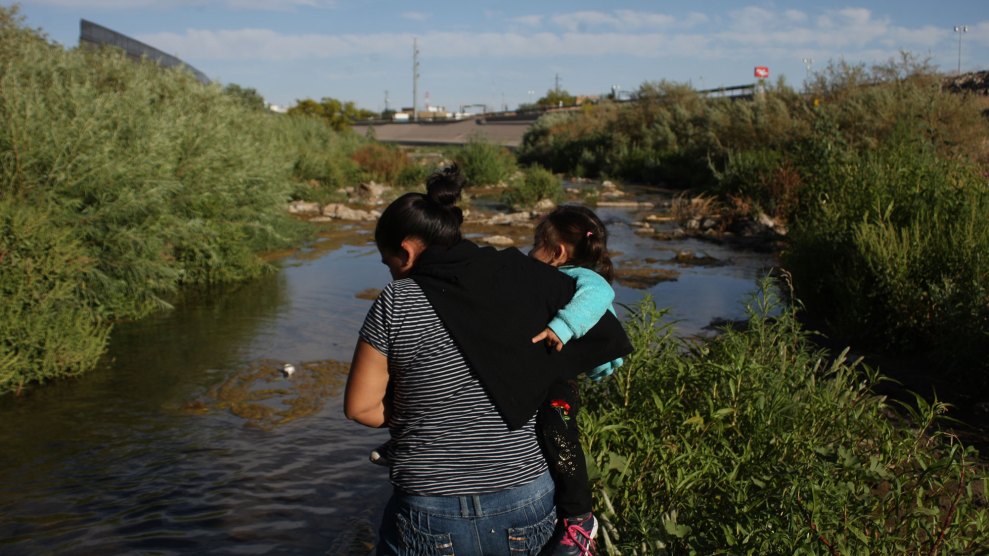 A woman with her child crosses the Rio Bravo, Mexico, to reach the United States surrender to border patrol agents and request asylum, on May 19, 2019.David Peinado/NurPhoto via Getty Images

President Joe Biden just signed an executive order forming a task force that will work to reunify migrant families separated under the Trump administration’s so-called “zero tolerance” policy at the border—a first step to try to correct the damage done to those seeking refuge in the United States.

“With the first action today we’re going to work to undo the moral and national shame of the previous administration that literally, not figuratively, ripped children from the arms of their families,” Biden said as he signed the order in the Oval Office. He added that the previous administration separated families “with no plan, none whatsoever,” to reunify children with their families, so this order is a first step to “remove the stain on our reputation for what the separations have caused.”

Alejandro Mayorkas, the newly sworn-in Department of Homeland Security Secretary, will lead the task force to identify all children separated from their families at the US-Mexico border between January 2017 and January 2021 in connection with the “zero tolerance” policy. The task force should “to the greatest extent possible” enable the reunification of those families.

While there aren’t specific directives concerning whether parents will be paroled into the United States, the order directs the task force to come up with recommendations on how to do that, and what additional services, including trauma and mental health services, might be needed to support these families.

The task force will include the secretaries of state and Health and Human Services, and the attorney general along with “other officers” who may be “invited to participate.” It will have 120 days to report its findings and then every 60 days after that it should provide progress reports to Biden. The order is one of three immigration orders signed by Biden on Tuesday that direct government officials to assess the damage done by the policies put in place by the Trump administration without making any immediate changes.

The American Civil Liberties Union was one of the first to sue to stop the family separation policy in 2018, and Lee Gelernt, the lead attorney in the lawsuit, said he’s pleased to see the task force’s formation with a “broad mandate,” but this order is only the beginning of what needs to be done. “All 5,500-plus separated families need immediate attention—they cannot wait 120 days for a task force to make recommendations,” Gelernt said.

As Gelernt told me earlier this month, the Biden administration has the power to do a lot when it comes to reunifying these families:

Under Trump’s zero-tolerance policy, first implemented in 2017 as a pilot program before its official rollout in 2018, adults entering the United States at the southern border were prosecuted for illegal entry. Because children can’t be detained with their parents or other family members in immigration detention centers, thousands of kids were put into federal custody—sometimes literally ripped from the arms of their parents. An estimated 5,500 families were separated under this policy, with many parents deported and their children treated as unaccompanied minors by the US government. To this day, lawyers can’t find the parents for more than 600 children who remain separated.

On June 20, 2018, following the massive public backlash, Trump issued an order that essentially ended the official family separation policy. A week later, a federal judge issued a preliminary injunction to stop DHS from separating more parents from their children. But even though most family separation officially ended, the government fell short in reunifying families.

Earlier this month, the Department of Justice’s Office of Inspector General put out a report that found that then–Attorney General Jeff Sessions and his senior staff rushed forward a family separation policy that the government was completely unprepared to implement. As my colleague Noah Lanard and I wrote, the report’s hyper-detailed accounting of how things went wrong at every step of the way showed a combination of intentional cruelty and unintentional incompetence. Session lead the draconian policy as part of the Trump administration’s broader plan to deter migrants and asylum seekers from even considering coming to the United States.

Last Tuesday, in a symbolic gesture, Acting Attorney General Monty Wilkinson issued a new memo officially rescinding the “zero tolerance” policy, although it had already ended. The Associated Press reported that Wilkinson said DOJ would “return to its longstanding policy and instructing prosecutors to act on the merits of individual cases.”

Kids in Need of Defense, an organization providing legal representation to migrant children called the task force a “vital first step in the long process to undo the Trump administration’s devastating family separation policies.” Like the ACLU, KIND is also urging the Biden administration to take immediate action to provide some compensation for children and their families. “Repairing the damage done to children, families, and our nation by the abhorrent policy of family separation will not happen overnight,” said Wendy Young, the organization’s president. “KIND continues to witness the unspeakable pain of our separated child clients and we look forward to working with the task force to facilitate reunification of these children with their parents.”