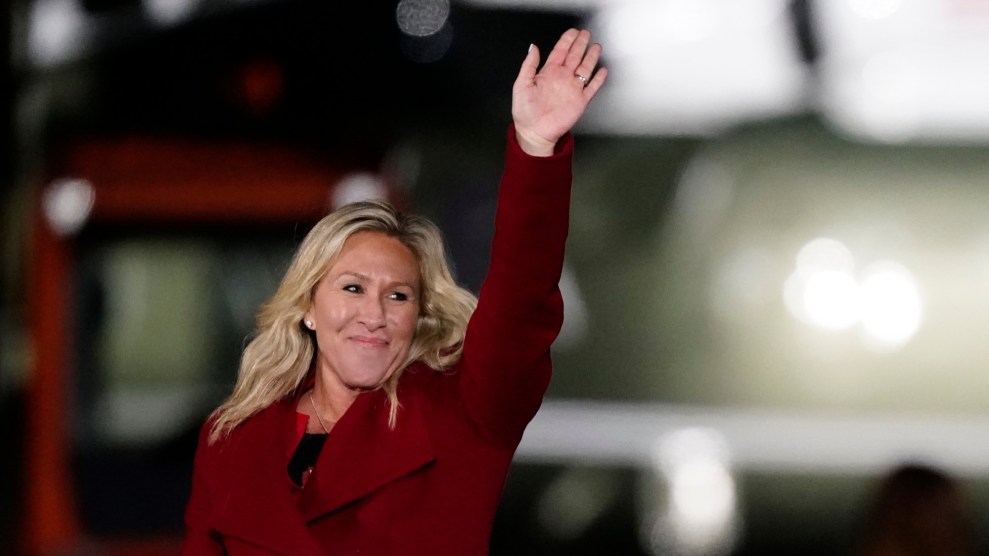 On January 6, we all watched as thousands of supporters of then-President Donald Trump breached the security barriers and physically fought with law enforcement to storm the offices and chambers of the Capitol. Urged on by Trump, their mission was to disrupt the counting of the electoral votes that would certify the presidential election of former Vice President Joe Biden. Fueled by the lie that the election had been stolen from the then-president, the overwhelmingly white group rampaged through the building demanding blood. They searched for House Speaker Nancy Pelosi (D-Calif.) and Rep. Alexandria Ocasio-Cortez (D-N.Y.), among other Democratic lawmakers, and chanting “Hang Mike Pence”—gallows had been constructed on the Capitol lawn. Their efforts to overturn the election results were unsuccessful, but five people including a Capitol Police officer were killed in the chaos. It was, by all working definitions of the word, a lynch mob—just look at the noose.

This all got me thinking about lynch mobs, those violent assertions of American white supremacy in which Black people were summarily executed at the hands of a white mob, usually for nothing more than having been Black in the wrong place at the wrong time. While the mob at the Capitol was missing the explicit racial component, their lust for the blood of anyone standing in the way of their white agenda evoked the same historic resonances.

In the aftermath of the assault on the Capitol, hundreds of arrests have been made, and Trump was impeached for a second time for incitement of this insurrection (though his conviction by the Senate is looking unlikely). But the lawmakers who egged on the mob—like Sen. Josh Hawley (R-Mo.) and Rep. Andy Biggs (R-Ariz.)— and should be held responsible for the violence that disrupted democracy have reacted with a dizzying mix of audacity, self-righteousness, and smugness. Impeachment would be divisive, they argued. Sen. Hawley boldly tried to claim that he wasn’t actually trying to overturn the election results when he objected to the election results. Some even argued that Democrats were merely seeking “pointless revenge.”

Quick to provide cover for having aided and abetted this hideous assault on democracy, they engaged in a little political maneuvering and changed the narrative to insist that the real mob was composed of the lawmakers seeking to hold them accountable. Their attempts to confuse the perpetrators, the victims, and what accountability looks like is only the most recent, but certainly the most public and extreme, episode in a long tradition of  justifying mob violence perpetrated by white people.

No one better illustrates the contemporary version of this dynamic than Rep. Marjorie Taylor Greene (R-Ga.), who, after the former president had his Twitter account revoked, emerged as the Republican Party’s newest superstar disruptor. Greene is a believer in the QAnon conspiracy that famously suggests that all Democrats are pedophiles, has called for the execution of Democrats, and claimed that mass school shootings were “false flag” events. In video obtained by Mother Jones, we see her calling for political violence in the days leading up to 2020 election. Greene was also a key Republican objecting to the certification of the electoral votes on the day the pro-Trump mob attacked the Capitol. On January 6, she reluctantly wore a mask, but maybe she was consoled by the fact it was emblazoned with “Stop the Steal”—a slogan popularized by those who falsely believed the election had been stolen.

Facing some heat for all her, um, controversial comments and her role in the insurrection, Greene responded with a tweeted statement: “A Message to the Mob.”

A Message to the Mob from Congresswoman Marjorie Taylor Greene pic.twitter.com/bdbG4OGrlK

Her “message” was in fact a fundraising appeal masquerading as a manifesto. “I take all of these slings and arrows gladly for you,” she said. “If Republicans cower to the mob, and let the Democrats and the Fake News media take me out, they’re opening the door to come after every Republican until there are none left.”

To be fair, even for a few Republicans she was an embarrassment. “Loony lies and conspiracy theories are cancer for the Republican Party and our country,” Senate Minority Leader Mitch McConnell (R-Ky.) said earlier this week. Though he was referring to Greene, he did not mention her by name in his statement.

On Wednesday, lawmakers in the House convened to debate stripping her of her committee roles. In response, Greene referenced a racist lie about Rep. Ilhan Omar (D-Minn.) and, once again, a mob. In the end, her party stood by Greene, reportedly even offering her a standing ovation at a closed-door meeting.

Members who sleep with our greatest enemy, marry their brother to get him in our country, lead a violent mob in neighborhoods, and more.

Hmm, now who could she be talking about? Of course, Greene wasn’t alone in cynically invoking lynch mob imagery.

AOC (152,661 votes) and Maxine Waters (152,272 votes) are part of lynch mob trying to destroy Congresswoman Marjorie Greene (229,827 votes).they should calm down and read the history of John Wilkes in the 1770s and the principle that the people’s vote matters more than parliament

Conservative leaders like Newt Gingrich, who was once Speaker of the House and a presidential candidate, are famous for deploying pseudo-intellectual (note the reference to the 1770s), patently false, and still infuriating arguments. But even for Gingrich to argue that Greene, a privileged white woman, is the victim of a mob led by people of color requires a  level of breathtaking shamelessness that’s only possible if you’ve dedicated your entire adult life to disingenuous racist attacks. Positing that Reps. Alexandria Ocasio-Cortez (D-N.Y.) and Maxine Waters (D-Calif.)—both of whom were targeted by the insurrectionists—were the architects of a mob is outrageous, because we watched an actual mob on live TV just four weeks ago. Also, because this once more blithely ignores the long history of white mob violence in this country. Some facts that Gingrich, historian that he claims to be, should know.

Since the nineteenth century, crowds of white supremacists have been riled up by rumors of Black people threatening their supremacy, which they considered to be crimes against both nature and society. Sometimes the reports were of a Black uprising, or perhaps a Black man had been arrested for the rape of a white woman. But one constant was the looming specter of Black progress, the terrifying idea that Black people could one day be equal to their white counterparts. In response to this threat, in much the same way as Gingrich and Greene attempt to portray the Democrats and liberals as the real transgressors, white mobs of the past were always treated as the response to, not the cause of, violence.

One of the best examples of this system of Black people being blamed for white violence took place in 1919. James Weldon Johnson, a field secretary for the NAACP would later call that summer the Red Summer because of all the blood that had been shed. World War I had just ended and though the United States and its allies were victorious, the government had not prepared for the return of soldiers. Social tensions were running high as thousands of Black people moved to the North and the Midwest to take the jobs that white men had left behind. In response to the perceived economic threat posed by these new workers—not to mention the sheer racism of seeing the potential for some racial economic equality—in major cities like Chicago, Detroit, and Washington DC, white mobs killed and injured people in the Black communities through a series of violent acts. But violence was not restricted to urban areas.

In September 1919, in Elaine, Arkansas, Black sharecroppers attempted to organize a union for better working conditions. The massacre began when shots were fired at a union meeting, killing a white man who’d come to disrupt the peaceful gathering of the sharecroppers. Whites caught wind of the killing and mobilized to begin murdering Black people. When all was said and done, approximately 200 Black people and five whites had been killed. The event was notable for having taken place in a rural rather than an urban setting. Local officials conspired to cover-up the massacre, and they had the perfect alibi: The Blacks, they said, were planning an insurrection. The local media and the national press ran inflammatory headlines blaming the violence on Black people, accusing them of planning to kill scores of white people. “Planned Massacre of Whites Today” read a New York Times headline. Only Black people stood trial for the deaths of five white people. Those who were responsible for the 200 deaths of Black people were unpunished.

The recent past also offers a contemporary version of justifying mob violence as a response to the threat of Black progress. In the days after the January 6 insurrection, some Republican lawmakers argued that the pro-Trump mob had only stormed the Capitol as a reaction to the Black Lives Matter protests last year. (Never mind the fact that the racial justice protesters were met with police force and more than 14,000 arrests.) The effort to hold the police accountable for the countless killings of Black people, according to the dictums of white supremacist ideology, requires that the BLM movement be the real mob.

By decrying the “mob,” Greene sets herself up as yet another victim of Black progress, which periodically rears its ugly head to threaten whiteness. The remarkable dishonesty of accusing other people of being the dangerous mob after inciting an insurrection is clear, but the ploy is more than just another example of blatant Republican hypocrisy. We’ve gotten used to that. More seriously, it sets the stage for yet another chapter in America’s long history of leaving white violence largely consequence-free. If enough people join Greene, Gingrich, and others in their conviction that the real mob was comprised of those people demanding accountability, then there will always be an excuse for the kind of violence that occurred at the Capitol. And there will never be a reason to seek accountability, much less justice.