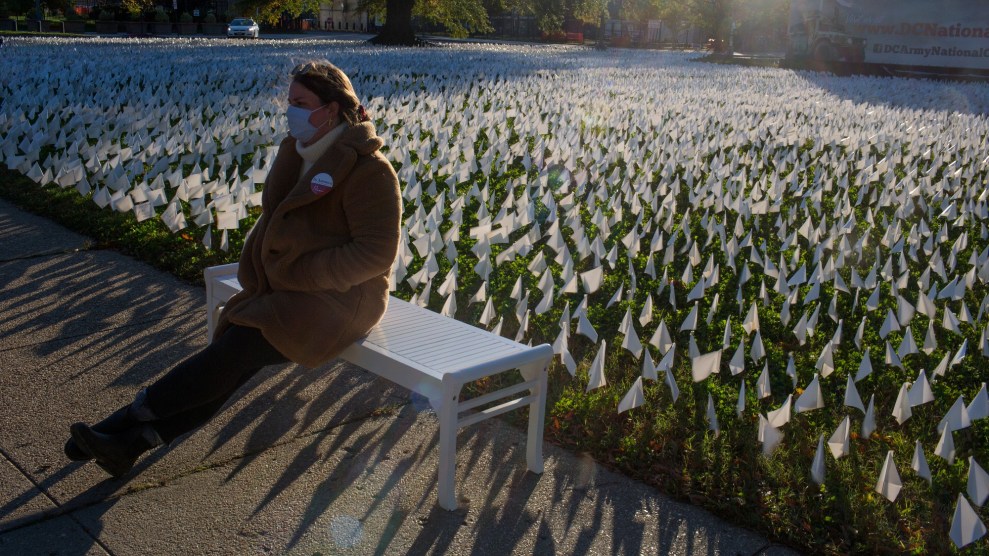 On the final full day of Donald Trump’s presidency, the United States reached another grim milestone during four years marked by plenty of grim milestones. By most measures, 400,000 people in the US now have died from the coronavirus. It’s the highest death toll in the world—but tragically unsurprising given the trajectory of the past year.

The staggering toll was both preventable and entirely predictable. Even aside from his vast personal incompetence—we’ll get to that later—President Trump blithely put into practice cherished conservative principles that are incompatible with a decent pandemic response. Castigating and delegitimizing government institutions, demonizing minority communities, and playing into white grievances may help Republicans win elections, but when it comes to beating back a massive public health catastrophe, what’s paramount is robust public agencies, a strong health care system, and special attention to the vulnerable. In many ways, we were doomed from the start.

But then there is the unique, Trumpian imprint of mendacity and cruelty. In March 2020, when the virus was seriously spreading and the country was hobbled by a lack of tests and testing strategy, Trump responded to a question from a reporter with a single line that would go on to define his administration’s coronavirus approach and inexorably lead to the number of deaths on his last full day in office 10 months later. “No,” he said emphatically, “I don’t take responsibility at all.” As the death toll first climbed, then soared, Trump and his enablers continued to act as if the president was the real victim. “I am incredibly disappointed in the politicization of this COVID-19 response,” Rep. Mark Green (R-Tenn.) said last March at a Congressional hearing. “The 24/7 criticism that the president is undergoing is unwarranted at a minimum.”

Trump never found a grudge he wouldn’t hold and a grievance he wouldn’t amplify. So it didn’t help that the virus’s first assault was concentrated in the Democratic stronghold of New York City, his hometown, the scene of many of his commercial and social triumphs that today has become hostile foreign territory to him and his merry band of family members and other sycophants. Plus, throughout the country, the virus was disproportionately killing people of color. For our white supremacist president, this deserved not even glancing recognition.

As the East Coast attempted to cope with the onslaught of the virus, the Trump administration maintained the illusion that people who lived in red states were immune. Even when he belatedly declared a state of emergency in mid-March and many states instituted lockdowns to varying degrees, the administration didn’t ramp up testing or begin contact tracing in any systematic way that might have at least managed to bring the virus under some control. To make matters worse, when the Centers for Disease Control and Prevention recommended wearing masks, Trump rejected and ridiculed them and his supporters dutifully followed suit, pretending that this most basic effort to contain the spread of the disease was in fact some kind of intolerable infringement on their rights. Anti-maskers frequently made public spectacles of themselves as they were denied entry into grocery stores and even appropriated the “I Can’t Breathe” mantra from racial justice protesters. As I wrote last July:

Officials have reassured anyone who would listen that even though wearing a mask can be a little uncomfortable, it doesn’t inhibit breathing. Nonetheless, almost immediately, the mask mandates turned into a new front in the culture war. Only liberal sheep wore masks to protect the public from coronavirus; real conservatives and libertarians would never stoop to something so feminine and weak! Just look at the president! Meanwhile, as the coronavirus has surged in the South and West, so too has the intensity of the mask war. The anti-mask cohort has adopted a slogan they saw was very effective, insisting that when wearing a mask, they can’t breathe.

When his supporters sometimes violently protested public health restrictions, especially in areas where Black people were dying disproportionately, he encouraged them, tweeting “LIBERATE” Virginia and Michigan.

By late May, the death toll had reached 100,000—a dark day for a nation that was once told 60,000 deaths would be the high-end. And still the Trump administration didn’t act, except to suggest that coronavirus patients inject bleach (just kidding, he later insisted) or to hawk hydroxychloroquine, an unproven medical treatment. Contrary to the president’s cherished convictions, the virus didn’t leave Trump-supporting regions alone, and the death toll accelerated in the midwest and in Southern states. Instead of, at least, caring about his own supporters, the president became preoccupied with his reelection and with demonizing Black Lives Matter protests. Plus, ever determined, against the advice of public health professionals, he held campaign rally in Tulsa, Oklahoma, where failed presidential candidate and co-chair of the Black Voices for Trump Herman Cain was photographed maskless. Cain died from coronavirus the following month.

Thus we witnessed our president’s modus operandi during a crisis: teetering between ignoring the virus and denying its severity by continually insisting the country was “rounding the corner.” Besides, he had more important things to do, like pack the Supreme Court after the death of Justice Ruth Bader Ginsburg. Even then, his generally unmasked September White House party for Amy Coney Barrett, whose nomination to the Supreme Court was rushed through in the days leading up to the election, turned into a superspreader event. Then, in October, Trump tested positive for the virus and was hospitalized for three days. Maybe this would bring him and his administration to their collective senses.

After recovering, Trump became the Superman his doctors always pretended he was, assuring the country that the deadly virus was actually not a big deal. “Don’t be afraid” of the virus, he crowed as the death toll surpassed 200,000. His supporters were in such deep denial, that Trump added to his repertoire of lies that recovery from the virus was a breeze. One only needed to be pumped up on steroids and receive the best medical care on the planet at Walter Reed Medical Center.

All this denial didn’t help him in the end, since he was defeated and will now, fortunately, not serve a second term—partially because of his disastrous handling of the coronavirus. When the country entered the worst phase of the pandemic thus far, Trump was more preoccupied with perpetuating the Big Lie that the election had been stolen from him through massive fraud. As my colleague Dave Gilson wrote in December, in the month after the election, Trump launched 729 tweets, but not a single one was about the death toll:

Reading Trump’s recent tweets, you would never know the United States is in the midst of a surging pandemic that is killing more than 2,000 people a day. Of his 729 tweets between November 3 and December 16, more than two-thirds were about his attempts to reverse his election loss through baseless claims of voter fraud and far-fetched lawsuits. The pandemic was just a blip: Four percent of his tweets were about vaccines and just two percent mentioned the coronavirus at all—without ever acknowledging its human cost or encouraging Americans to take precautions to protect themselves or others from getting sick.

A kind of psychic numbing had gripped so many of us by the end of December, when 300,000 people had died from the coronavirus; it would take only a few weeks for the next 100,000 to follow them. The Washington Post reported in December that according to a wealth of psychological research, the higher the death toll climbs, the less we care. Or rather, the less we are emotionally capable of caring. In mass disasters like the pandemic, say, or a tsunami, the more death surrounds us, the more remote it feels. Not that the Trump administration even thought to commemorate the lives lost with any public mourning, much less mention the staggering death toll in any public statement. Even then, the sheer scale was difficult to fathom, unless one is mourning a lost parent, child, sibling, relative, neighbor, friend, or co-worker.

The Trump administration has finally reached its conclusion with a predictably dark legacy: the only president to be impeached twice—once for inciting an insurrection— the only lame duck president to carry out federal executions—since the federal death penalty was reinstated, only three executions had been carried out by a president until Trump executed 13 people—and a president who exacerbated the toll from the deadliest months in US history.

Yes, millions of people are breathing a sigh of relief that the Trump presidency is over. But the aftermath is just beginning. The coronavirus death toll will continue to climb, the vaccine rollout will continue to lag, and the economic recovery will continue to drag on. The United States will be grappling with the damage from a one-term president for years to come.

Trump’s 2017 inaugural address was laden with ominous references. Nonetheless, he still promised to “fight” for the country. “I will fight for you with every breath in my body,” Trump said. “I will never, ever let you down.” But all the clues that Trump would make for a horrific pandemic president were there from the beginning. He began his campaign by demonizing the people who would be most impacted by the coronavirus and, as president, continued the Republican tradition of dismantling public institutions. In the end, the words from his inaugural address that most reflected his presidency were not his vow to fight for his country, but his description of “American carnage.” Four years later, he shunned the typical farewell address, choosing to release a 20-minute video highlighting his accomplishments. “We did what we came here to do,” he said. “And so much more.”