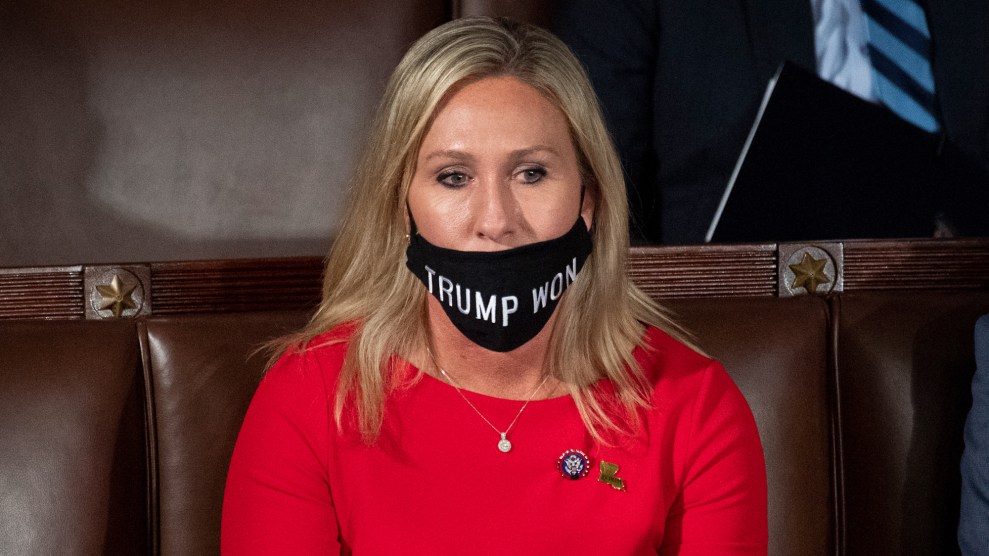 In the past 24 hours, a trove of old social media posts has come back to haunt first-term Georgia congresswoman Marjorie Taylor Greene.

There’s her repeated support for Facebook content calling for the execution of prominent Democrats, including House Speaker Nancy Pelosi. “A bullet to the head would be quicker” read one January 2019 post uncovered by CNN, a post whose commenters described methods of eliminating the top Democrat.

In April 2018, when someone asked, “Now do we get to hang them ?? Meaning H & O,” a reference to Hillary Clinton and Barack Obama, Greene responded: “Stage is being set. Players are being put in place. We must be patient. This must be done perfectly or liberal judges would let them off.”

Then, on Wednesday morning, Fred Guttenberg, the Parkland father and gun control activist, posted a video showing Greene taunting David Hogg, a student survivor of the Parkland shooting. “Why are you supporting red-flag gun laws that attack our Second Amendment rights,” Greene says as she follows Hogg down the street. “And why are you using kids as a barrier? Do you not know how to defend your stance?” She goes on to call Hogg a “coward,” and falsely accuses him of being paid by liberals and George Soros.

.@mtgreenee, is this you harassing @davidhogg111 weeks after the Parkland shooting, that my daughter was killed in & he was in? Calling him a coward for ignoring your insanity. I will answer all of your questions in person. Get ready to record again.pic.twitter.com/aQjL74x7kh

All of this has left Republicans suddenly disavowing Greene. “These comments are deeply disturbing and Leader McCarthy plans to have a conversation with the Congresswoman about them,” Mark Bednar, a spokesman for House Minority Leader Kevin McCarthy said in a statement after CNN revealed that Greene had endorsed executing Democrats. That comes shortly after McCarthy mildly pushed back on Greene’s efforts to impeach Joe Biden last week, arguing that it merely wasn’t the right time to launch such a move.

Yet this is the same Kevin McCarthy, who along with Rep. Jim Jordan, warmly embraced Greene before she entered Congress—despite full knowledge of Greene supporting the exact same blend of abhorrent, dangerous nonsense and calls for violence that have emerged this week. As my colleague Ali Breland reported previously:

Even though this is a general problem for the nation, House GOP Leader Kevin McCarthy (R-Calif.) doesn’t seem to mind. McCarthy’s spokesperson told reporters back in June after Politico first reported on videos of Greene saying racist comments that the congressman found them “appalling” and had “no tolerance for them.” But even with that, and Greene’s clear association with QAnon, in the final weeks of the race McCarthy seemed to treat her like any other candidate. He had several conversations with Green and her top rival, with his spokesperson telling Politico McCarthy had a “good and productive” relationship with both and would remain neutral in the contest.

You can expect McCarthy and others to invoke the same playbook of milquetoast admonishment yet again. But it’s worth considering what the GOP risks by doing so. It’s increasingly clear that Republicans have no intention of convicting Donald Trump in the wake of the Capitol insurrection, and most of the party appears perfectly willing to maintain alliances with the worst fringes of Trumpism. If that’s the route they take, and this certainly seems to be the case, one need look no further than Greene to foretell the future of the Republican Party.

“There’s nothing she can do to lose my vote, unless she murdered a baby or something,” one Georgia Republican official told the New Yorker in October. That sounds a lot like shooting someone on Fifth Avenue, doesn’t it?