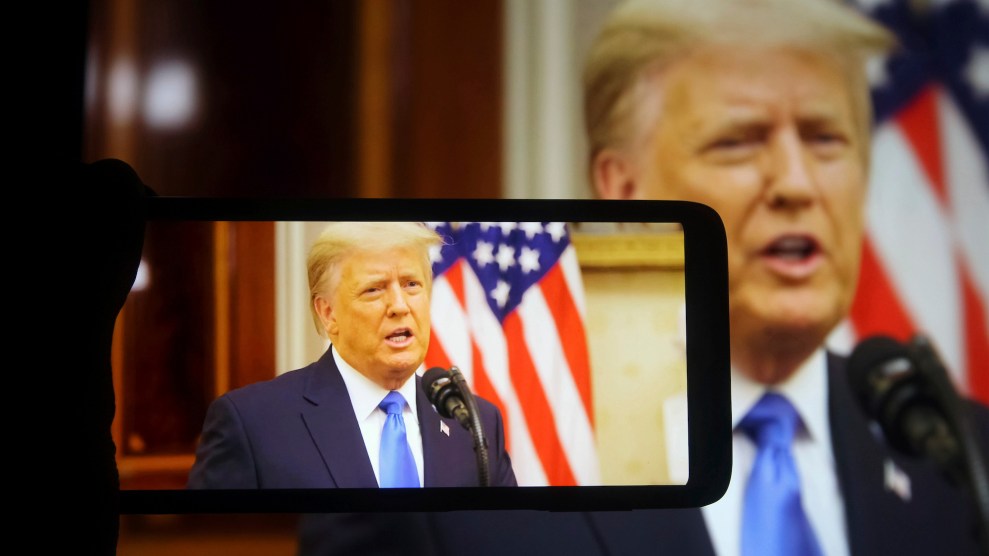 In this photo illustration the US President Donald Trump speaks at his farewell address during his last day in office, on a fragment of youtube video displayed on a mobile phone and a pc screen. Photo by Pavlo Gonchar / SOPA Images/Sipa USA)(Sipa via AP Images

As Donald Trump left the White House yesterday, he returned to a business empire in dire financial condition—far worse than previously reported, according to newly disclosed information. Trump’s final personal financial statement, filed Wednesday night, shows that revenues at his company, the Trump Organization, plunged by more than $150 million last year—a whopping decline of nearly 40 percent. The disclosure also reveals that many of his flagship properties saw much of their business evaporate over the last year.

When Trump took office, he said that he was putting his adult sons in charge of the business and joked he would tell them, “You’re fired!” if he came back to find his company in bad shape. Well, it’s in bad shape. That may have less to do with his sons’ stewardship of the company than with the devastating effects of the COVID-19 pandemic—the crisis Trump so often downplayed or ignored—on the hospitality industry. Trump’s brand-tarnishing actions in office, capped by his incitement of an insurrection at the Capitol, have also been a main cause of the Trump Organization’s decline in recent years. In the past two weeks—following the murderous assault on Capitol Hill—banks and financial partners have cut ties with him, closing his accounts and working to clawback control of properties he leases or operates.

All these troubles raise the question of how long Trump the businessman can limp along before he must start shedding properties to cover his massive debts.

Under ethics rules, presidents file annual personal financial disclosure statements every spring, but the newest numbers come from a termination report Trump was required to submit on his way out the door. It covers all of 2020 and the first 15 days of 2021. And it shows the drop-off  in Trump’s business last year was enormous. According to the report filed last summer and covering 2019, the Trump Organization had at least $432.5 million in revenue (a slight decline from 2018). In 2020, his firm’s revenues slid precipitously to $277.6 million, a drop of at least 36 percent. That’s not his profits—just his revenues.

The Trump Organization did not respond to a request for comment, but Eric Trump, the former president’s son who has helmed much of the Trump Organization’s operations while his father was gone, told the New York Times that the places where the most revenue was lost were properties shut down due to government mandates. He said the company’s cash flow was fine and debt load was low.

The Trump Organization’s debt load may be manageable in relation to the overall value of the assets Trump owns, but Trump does have nearly half-billion dollars in debt coming due in the next several years—and few banks willing to deal with him. The huge hit to Trump’s 2020 revenues could weaken his standing for potential lenders he might approach for help refinancing his debt.

Trump’s flagship properties appeared to be hardest hit, according to this latest financial disclosure. His Trump National Doral golf course lost the most money. It brought in $44.1 million in revenue in 2020, about $33 million less than in 2019. In his first financial disclosure as president, a report which covered 2016 and the early months of 2017, Trump reported Doral as having $115.8 million in revenue.

Trump’s downtown DC luxury hotel, which opened days before he was elected in 2016 and became a de facto clubhouse for conservative Republican lawmakers, activists, and lobbyists trying to curry favor with the administration, was also devastated by the pandemic. In 2018 and 2019, the hotel listed $40 million in revenue—in 2020 it had $15.1 million. This is particularly worrisome for  the former president. As the hotel’s revenues hit highs in 2018 and 2019, Trump said he was seeking to sell the property, but his real estate broker told potential buyers the hotel had an occupancy rate of about 57 percent—lower than competing hotels and, by the estimates of hotel industry experts, not enough to make it profitable. (After January 6, the real estate broker working with the Trump Organization on the hotel’s sale said it will no longer handle the potential deal.)

Other hotels Trump owns or manages saw revenue fall steeply in 2020. Numbers were down for his hotels in Hawaii and Chicago, where this fall, a manager told investors that without a quick turnabout in the pandemic, “It’s going to be very, very tough to keep the boat afloat.”

Trump’s investments in Scotland and Ireland have occupied an increasingly important place in Trump’s business empire, but they, too, were hit hard in 2020. By his own account, Trump has invested $400 million in his Scottish properties since 2006, and he has received approval to build a $200 million housing development around his course near Aberdeen, in northeastern Scotland—a potentially hugely lucrative expansion that if successful could be a huge cash boon for Trump. But for the time being, things look grim—grimmer than usual, given that none of his resorts in the British Isles have ever turned a profit.

At the Turnberry resort, a legendary Scottish golf course Trump purchased in 2014 and has been rehabbing, Trump reported earning $25.6 million in 2019 (a high for the property under his ownership). In 2020, he reported $9.8 million in revenue. At his resort in Aberdeenshire, which he built from scratch starting in 2006, Trump listed a measly $1.4 million in revenue for all of 2020. In 2019, according to British corporate documents, his administrative expenses alone were $1.5 million. His Irish course, Doonbeg, which in 2019 was buoyed by a stay from Vice President Mike Pence and his entourage during a state visit to Ireland, had $4.4 million in revenue in 2020, less than a third of its 2019 number.

Not all of Trump’s properties were slammed in 2020. His Mar-a-Lago resort, where he spent a great amount of time, held personal and political events, and hosted international leaders, increased its revenue in 2020 by $2.7 million. A handful of golf course properties and his Virginia winery either saw slight increases or only moderate declines. These particular revenue streams may not have collapsed because these properties rely on local customers who can drive to the property. His major hotels and resorts rely on well-heeled travelers coming from afar—a group which largely stayed grounded in 2020.

Jan A. deRoos, a professor emeritus of hotel finance and real estate at Cornell University and longtime industry veteran, said Trump will need to take a hard look at his properties now that he’s out of office and make tough decisions about their viability. If a hotel property isn’t covering the basic expenses, he might have to give it up.

“I’m going to guess he’s cash flow negative, and if you’re negative there then you have to make a decision—do you feed it and continue to pay the bank and property taxes, or do you just let everything go and let the lenders take possession,” deRoos says. “That’s a big strategic decision on how to proceed and what recovery looks like. If the recovery is V-shaped, you might feed it for a year, if it’s L-shaped you walk away, unless you like to just own things with your name on it.”

“He has a reputation for holding onto stuff and playing hardball,” he says. “I wouldn’t put anything past him in terms of playing hardball, but I think people’s wiliness to not play hardball back is probably limited at this point in his career.”