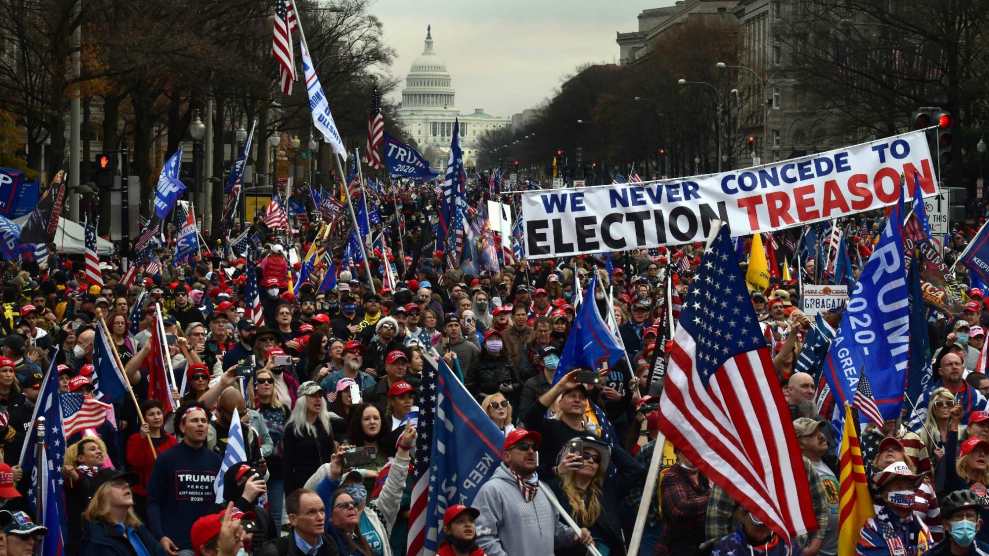 The protests planned for Wednesday in support of President Trump are proving, like many far-right mobilizations, to be especially difficult for researchers, activists, and reporters to track.

The protest will radicalize some to even more extreme positions.

The far-right protesters who plan to assemble in DC as Congress counts electoral college votes will be there to support Trump and oppose the election outcome. But beyond that, they are likely to be a diverse and uncoordinated mass that includes many demonstrators who are something other than garden variety Trump supporters—and who use the occasion to spread their messages and grow their ranks.

“It is super messy,” says Jared Holt, a fellow at the Atlantic Council’s Digital Forensics Research Lab. “You have all these competing groups coming in at the same time. There are die-hard extremists, white nationalists, conspiracy theory believers, and QAnon people, Proud Boys—which don’t fit neatly in any bucket. All these different groups coming into the same location all with their own desires and aspirations for what they want to happen.” On top of this, Holt noted, “communication between the groups appears to be minimal.”

The disjointedness has researchers like Joan Donovan, a longtime extremism researcher who works at the Shorenstein Center, concerned. “With such divergent goals and a lack of organization, this day is going to be chaotic,” she tweeted on Saturday.

Among other experts, there’s a widely recognized potential for chaos and violence, and a shared uncertainty about what that might look like. The Washington Post reported that online far-right chats featured threats and discussion of smuggling guns into DC and setting up armed encampments inside the city. But the Anti-Defamation League has said that it had not yet found “any credible threats of acts of violence,” caveating that “the combination of an extremist presence at the rallies and the heated nature of the rhetoric suggests that violence is a possibility.”

“There’s a lot of hyperbolic rhetoric and it’s hard to parse how much is bluster and how much is what they’re actually planning to do,” Holt said.

The leader of the Proud Boys, Enrique Tarrio, was arrested on Monday on charges of having burned a Black church’s Black Lives Matter sign during the neofascist gang’s December demonstrations in DC, adding another complicated angle to a difficult situation. He was released following a hearing on Tuesday with orders to return to court in June. A judge barred him from entering DC until then.

“Proud Boys are dangerous enough with a leader. I can’t imagine what they’re going to be like without one, unmoored from Gavin, Trump, and now Tarrio. What will they be about?” asks Megan Squire, a computer science professor at Elon University who studies online extremism. Tarrio’s arrest could deter Proud Boys from getting too aggressive—or it could serve as a radicalizing and galvanizing incident.

Michael E. Hayden, a senior investigative reporter at the Southern Poverty Law Center who focuses on hate and extremism, shares the broader concerns about Wednesday’s potential for violence, and of the event’s unpredictability. But he’s confident in predicting the protest will radicalize some attendees to even more extreme hard-right positions.

Hayden pointed to an instance where Ali Alexander, a right-wing activist and profiteer who has been deeply involved in right-wing election protests, called on Trump to “never disavow or denounce” an ally, no matter how dangerous their politics or tactics.

Trump has already taken it on himself to more or less do this by endorsing, accepting, or rebroadcasting support from almost anyone willing to offer it. “There used to be a clear separation of acceptable Republican politics, even with Trump politics,” Hayden said. “Now they’re in a sort of place where they don’t even look and vet people if they’re a white nationalist or neo-fascist. That open acceptance is new post-election loss development.”

Since Joe Biden won the presidency, the sitting administration has installed Darren Beattie, who was fired from being a Trump speechwriter in 2018 after attending a conference with white nationalists, to the Commission for the Preservation of America’s Heritage Abroad. Jason Richwine, who has advocated using IQ tests in the immigration process, was given a position at the National Institute of Standards and Technology. Adam Candeub, a lawyer with ties to white nationalists, was tapped for a position in the Department of Justice.

“They don’t even look and vet people if they’re a white nationalist or neo-fascist.”

Hayden thinks Trump’s sanitizing and embrace of extremist positions could trickle down to the MAGA rank and file who attend the protests and find themselves making common cause with kinds of people the Republican party’s elite once worked to shun.

In addition to groups like the Proud Boys and militias, Nick Fuentes, a white supremacist social media figure, is supposed to attend alongside a gang of fervent followers. Fuentes has followed the playbook of prominent racists, like David Duke, of trying to publicly shrug off accusations of being a white supremacist while doubling down on disseminating antisemitism and white superiority myths to his followers. And like Duke, his charisma and wit, relative to more inept and less skillful influencers, has helped him recruit and radicalize a solidly growing base of young, mostly white, men.

The type of person ripe to be won over by Fuentes and others like him won’t be in short supply on Wednesday. Even if no violence breaks out, Hayden worries the protests will be an inflection point of radicalization for Trump’s followers.

“This feels like a moment where they are opening the floodgates to far-right extremists,” he says.