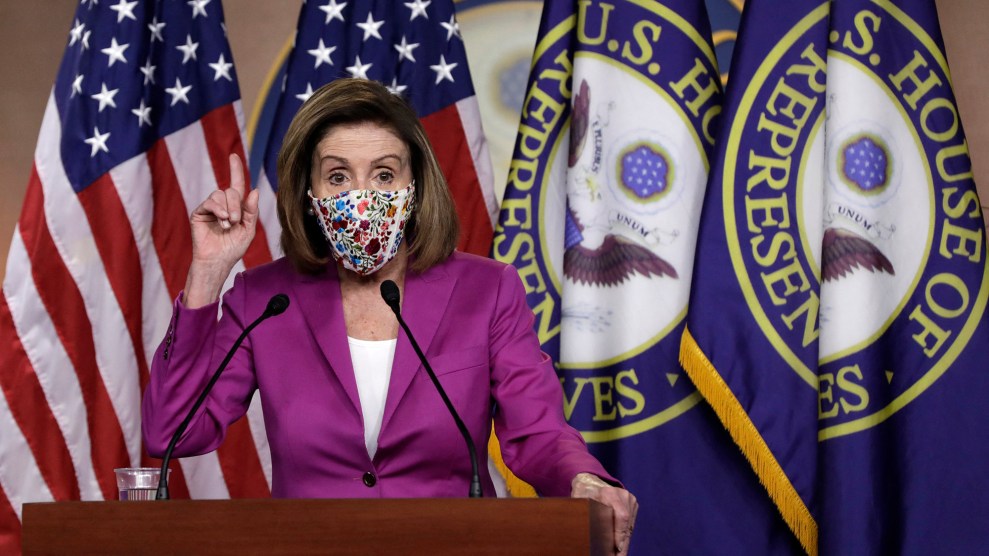 On Friday afternoon, in the wake of the Donald Trump–incited terrorist attack on the US Capitol, House Democrats moved swiftly toward a possible second impeachment of the president. In an unprecedented step, they used a Zoom meeting of the entire caucus to assign members to the Rules Committee for the new Congress. By setting up the committee, Democrats are ensuring that an impeachment resolution can obtain speedy consideration by the committee—a necessary step for reaching the House floor—and be put to a quick vote without any impeachment hearings. A vote—in the Rules Committee and then in the full House—could happen as soon as Monday, though no schedule has been set.

Yet some House Democrats pushing for Trump’s immediate impeachment who were on the call were concerned that Speaker Nancy Pelosi is crafting a process to include extra days to allow for the possibility of other options—that is, a Trump resignation or Trump’s removal from office via invocation of the 25th Amendment.

“The consensus on the call was to call for Trump’s resignation, press for invocation of the 25th Amendment, and move forward with impeachment,” one House member says. “Pelosi is still not decided on how we will proceed.” An impeachment resolution will be introduced in the House on Monday. But, this member notes, “it is up to her as to whether we are called back into session to take up the resolution.” Still, impeachment “is moving,” says Rep. Jared Huffman (D-Calif.) “There was a remarkable level of consensus on the need for it. There’s something unifying about what we all lived through during the attack.”

During the meeting, only one House Democrat spoke out against impeachment: Rep. Kurt Schrader of Oregon. “I think he is going to reconsider,” Huffman notes.

The Zoom call lasted for about three hours, and still not every member who wished to speak had the chance. Pelosi adjourned the meeting in the late afternoon, with the expectation that it would resume later on Friday or on Saturday.  House Majority Leader Steny Hoyer (D-Md.) told members he would have an update on the timing of impeachment proceedings on Saturday, according to members on the call.

Some of the Democrats on the call were not keen on any delay, urging an impeachment vote as soon as possible. But Rep. Jake Auchincloss (D- Mass.) notes that impeachment and pushing for “the 25th amendment are complementary, not mutually exclusive. It’s about saying someone is unfit going forward, impeachment is looking backward. Both are appropriate here.” Another member on the call says Pelosi seems to think the threat of impeachment will help force Trump’s cabinet to invoke the 25th Amendment. (Pelosi’s office did not respond to a request for comment.)

Media reports have noted that though members of Trump’s inner circle have discussed using the 25th Amendment to remove Trump, Vice President Mike Pence opposes invoking this constitutional clause to boot Trump out of the White House. And Trump has reportedly told aides that he has no intention of resigning.

Even if either of those two events come to pass, Huffman points out, “we have to continue with impeachment and seek a Senate conviction that will prohibit Trump from any second acts.”

After the Zoom call, Pelosi issued a statement saying that if Trump doesn’t resign, “I have instructed the Rules Committee to be prepared to move forward with Congressman Jamie Raskin’s 25th Amendment legislation and a motion for impeachment.” Raskin’s bill would allow Congress to establish a commission that could independently determine the president’s fitness for office and discharge him if he’s found unfit.

Raskin (D-Md.) and Reps. Ted Lieu (D-Calif.) and David Cicilline (D-R.I.) have taken the lead in drawing up articles of impeachment, citing Trump for the “incitement of insurrection.” The resolution states that Trump “has demonstrated that he will remain a threat to national security, democracy, and the Constitution if allowed to remain in office, and has acted in a manner grossly incompatible with self-governance and the rule of law.” This impeachment resolution could be altered before it is approved by the newly formed Rules Committee and sent to the floor for a vote. Some House Democrats are trying to find a handful of House Republicans to support impeachment, and that effort could lead to changes in the resolution.

Huffman, who was holed up alone in his office during the terrorist attack on the Capitol, emphasizes the novelty and speed of setting up the Rules Committee on the Zoom call. Noting that congressional action often is slow, he says, “This is faster than anything we’ve ever seen.” He calls it a sign of how resolute the Democrats are to bring impeachment to a vote this coming week.

On Friday afternoon, the White House released a statement regarding the prospect of a second impeachment for Trump: “As President Trump said yesterday, this is a time for healing and unity as one Nation. A politically motivated impeachment against a President with 12 days remaining in his term will only serve to further divide our great country.”

Rep. Jamaal Bowman (D-N.Y.), a newly elected progressive member, says that impeachment may not be sufficient: “Criminal charges, when he’s done with office, is something that we need to look at as well. He needs to be held accountable beyond impeachment.”