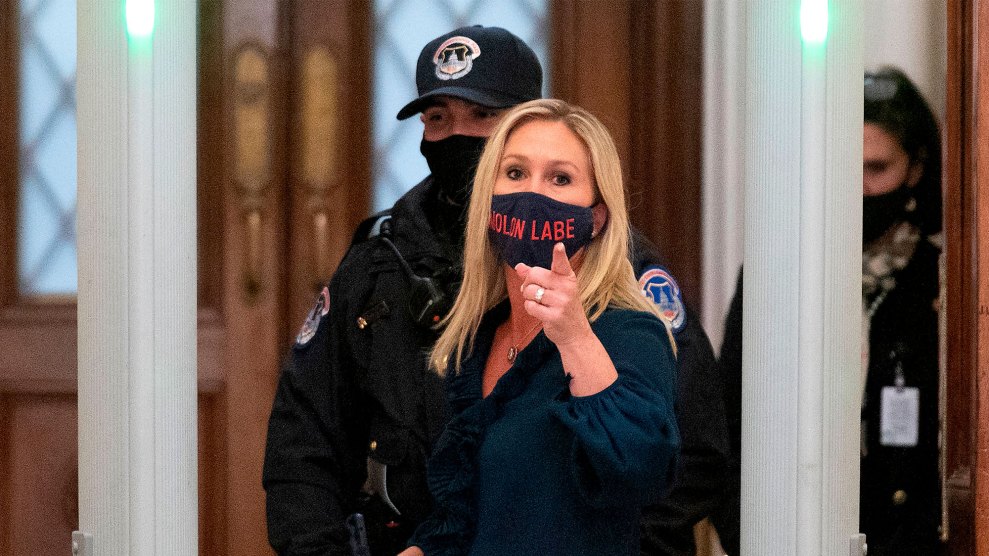 The resolution will be introduced Monday to formally censure Greene after she made remarks “supporting the assassination of current and former elected officials,” according to a press release. Jacobs and Williams join California Rep. Jimmy Gomez, who earlier this week said he’d introduce a resolution to expel Greene from Congress “in light of numerous reports revealing her repeated endorsements of sedition, domestic terrorism, and political violence.”

“Marjorie Taylor Greene has been elected to one of the highest offices in our country as a member of the United States Congress, and she must be held accountable,” Williams said Saturday on CNN. “She’s thriving off of the attention, and we have to stop giving her a platform.”

Greene has pushed extreme conspiracy theories saying the mass shootings in Sandy Hook and Parkland were a hoax, that a plane never crashed into the Pentagon on 9/11, and that Hillary Clinton gruesomely murdered children. She has also pushed the false narrative of a stolen election in November. On the day after the Jan. 6 insurrection she told an interviewer, “it was a hard thing we did yesterday, but I wouldn’t do anything else.”

On Friday, my colleague Mark Follman uncovered a video from before Election Day in which Greene, in an interview with a pro-gun activist, tells viewers that “once it’s gone, freedom doesn’t come back by itself. The only way you get your freedoms back is it’s earned with the price of blood.”

Meanwhile, Cori Bush (D-Missouri) said on Friday that she’d asked to move her office away from Greene’s:

A maskless Marjorie Taylor Greene & her staff berated me in a hallway. She targeted me & others on social media.

I'm moving my office away from hers for my team's safety.

I've called for the expulsion of members who incited the insurrection from Day 1. Bring H.Res 25 to a vote.

In response, Greene posted parts of a confrontation between the two in which Greene is seen shouting with her mask pulled down to her chin.

“What I cannot do is continue to look over my shoulder wondering if a white supremacist in Congress by the name of Marjory Taylor Greene—or anyone else, because there are others—that they are doing something or conspiring against us,” Bush said.

House Minority Leader Kevin McCarthy is expected to meet with her Tuesday. Republicans have assigned Greene to the House education committee.

Greene tweeted Saturday that she had a “great call” with her “all time favorite POTUS, President Trump” and that she “won’t back down” or apologize for what she’s done.

I had a GREAT call with my all time favorite POTUS, President Trump!