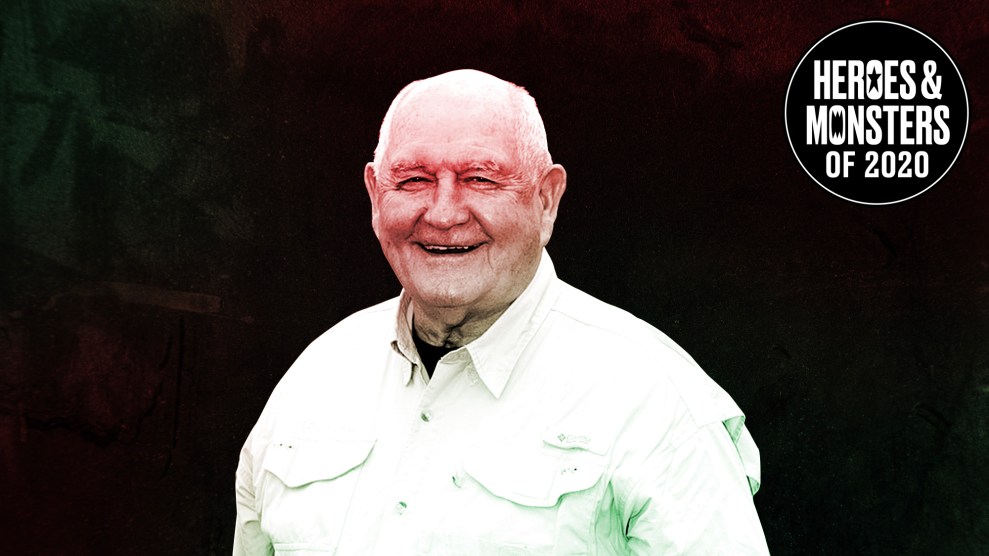 Presumably, some political appointees who served in the Trump administration did so with earnest intentions, hoping to bring dignity and professionalism to the task of advancing the Republican agenda of deregulation, austerity (for non-cronies), and upward wealth redistribution. Then there were the full-on MAGA-bots like, say, Sonny Perdue, Georgia politician and agribusiness entrepreneur who became agriculture secretary. He spent his 2020 like he spent the other years of his Washington stint: flattering his boss at every opportunity, and lavishing largesse on political allies while undercutting poor people and food-system workers.

Perdue is a kind of an easy-going Southern version of the president he served so zealously. Like Trump, he’s a former Democrat who ascended to political power (in Perdue’s case, Georgia governor) in a stunning upset. As governor from 2003 until 2011, he celebrated the state’s legacy of chattel slavery—signing 2009 legislation making April “Confederate History and Heritage Month,” honoring the “more than 90,000 brave men and women who served the Confederate States of America.” He was an early adopter of race-motivated voter suppression, signing into law one of the nation’s first “strict” ID laws.

Purdue merged the voter-fraud myth with another racist fantasy, also fervently indulged by Trump, that undocumented immigrants burden taxpayers by siphoning welfare benefits. “It is simply unacceptable for people to sneak into this country illegally on Thursday, obtain a government-issued ID on Friday, head for the welfare office on Monday, and cast a vote on Tuesday,” he declared, backing up his rancid lies with a crackdown on undocumented people. His anti-immigrant machinations worked all too well, creating a crippling labor shortage for Georgia’s immigrant-dependent farms and poultry slaughterhouses.

As governor, Perdue mastered the Trumpian strategy of using know-nothing bigotry as a beard for brazen self-dealing, sometimes involving his own family. In 2005, Georgia state Rep. Larry O’Neal—Perdue’s personal lawyer—managed to pass what the Atlanta Journal-Constitution called a “seemingly mundane tax bill” that included a “a last-minute change” that saved the governor an estimated $100,000 in state taxes.

In 2010, at the tail end of his second term as governor, Perdue named his cousin, David Perdue—who had just stepped down as chief executive of Dollar General discount stores—to the board of the Georgia Ports Authority. According to the Atlanta Journal-Constitution, it was a plum post for the political novice, which he used as a springboard that helped propel him to a US Senate seat in 2014. In this 2017 post, I recount some of the port-related shenanigans the cousins Perdue got up to together, including launching a port-reliant export business. (David Perdue is now locked in a tight runoff election that could decide which party controls the Senate in the next Congress.)

Meanwhile, in 2020, the pandemic ravaged meatpacking workers and put millions out of work, causing a surge in the need for food assistance—both very much areas of concern for the agriculture department. @SecretarySonny (to use his folksy Twitter handle) stayed the course that characterized his entire time at UDSA. The COVID-19 crisis served as yet another opportunity to promote the political fortunes of his boss, without impeding his pursuit of a pro-agribusiness, anti-worker agenda. In July, with the economic fallout from the pandemic generating a massive hunger crisis, Perdue alighted on North Carolina, a key swing state, to stage a rally promoting congressionally mandated food aid as an example of the personal benevolence of Donald Trump. The harangue, which ended with the ag secretary leading a chant of “four more years,” earned Perdue a knuckle-rap from the Office of Special Counsel for violating the Hatch Act, which forbids government employees from campaigning while on the job. The Perdue USDA also insisted that federally funded grocery boxes distributed by food banks contain a letter signed by Trump, touting the administration’s coronavirus response.

While Perdue puffed up the generosity of his boss, the USDA was busy botching the food-relief effort.

While Perdue puffed up the generosity of his boss, the USDA was busy botching the food-relief effort, awarding fat contracts to distributors ill-equipped to handle them, with the result that “some parts of the country got a lot of food, while others got very little,” NPR reported.

Undeterred by the pandemic-led spike in hunger, Perdue also doubled- and tripled-down on a long-held goal: boosting work requirements for the Supplemental Nutrition Assistance Program that would eliminate food aid for at least 1.2 million people—about a third of them households containing senior citizens, nearly a quarter with children, and 11 percent with a disabled person, according to nonpartisan think tank Mathematica.

Not satisfied with fighting to take food off the tables of poor families, Perdue also set his sights on farm workers. At the beginning of 2020, Perdue yearned publicly for a way to cut federally mandated wages for migrant farm workers on guest visas. Then the pandemic hit, ripping through migrant farm worker communities, who toiled on with little in the way of protective gear or opportunities for social distancing. Perdue’s response? He continued his effort to cut their wages, ultimately teaming with the Department of Labor on a rule change that will result in an aggregate wage cut worth at least $170.68 million annually over the next ten years—a transfer of money from low-wage workers to relatively wealthy farm owners.

Similarly, while the pandemic savaged meatpacking workers, killing at least 563 as of mid-December, the ag department kept on with a trend it had started in 2019: allowing giant poultry companies to speed up their slaughterhouse kill lines. Faster kill lines boost packer profits even as they put already pandemic-stressed workers under greater strain, while also making proper social distancing even more difficult. An investigation by the Food and Environment Reporting Network’s Leah Douglas found that at least 40 percent of chicken plants operating at the higher speeds experienced COVID outbreaks, versus 14 percent for the overall meat sector. Coronavirus-riddled slaughterhouses, in turn, emerged as primary vectors for spreading the pathogen to surrounding communities.

The Perdue USDA’s largesse to large-scale farmers and agribusinesses went beyond cutting wages and protective measures for their workers. In July, as the general election heated up, the department tapped a Depression-era funding mechanism called the Commodity Credit Corporation to come up with $14 billion—without having to consult Congress—to hand to producers of commodities like corn, soybeans and wheat, ostensibly for losses due to the coronavirus. Using the CCC to hand billions to big farmers—major Trump supporters in 2016— is a signature move of Perdue’s USDA. Citing export losses from Trump’s trade war with China, the USDA lavished mainly huge soybean, hog, and cotton farmers with $28 billion in 2018 and 2019—more than double the price tag of President Barack Obama’s 2009 auto bailout.

Through it all, Perdue maintained his extraordinary podcast, The Sonnyside of the Farm, a monthly testament to the genius of his boss and the glory of big agribusiness.

Through it all, Perdue maintained his extraordinary podcast, The Sonnyside of the Farm, a monthly testament to the genius of his boss and the glory of big agribusiness. Launched in October 2019, a week after the House of Representatives announced an impeachment inquiry against Trump, the show began with an appearance from Sarah Huckabee Sanders. Entitled “President Trump’s Affection for American Farmers,” the episode featured the host and former White House press secretary competing to see who could lavish the most praise on Trump. Was it Sanders with “the most fun, engaging, charming, and charismatic people I’ve ever been around”? Or Perdue’s observation of how Trump “has an amazing instinctive ability to make decisions”?

In the podcast’s final episode before the election, released Oct. 29, Perdue hosted another MAGA loyalist, the high-living former Wall Street man and TV personality Larry Kudlow, the non-economist who Trump improbably chose to lead the National Economic Council. Kudlow used the opportunity to fluff Trump’s economic record. He praised the tax cuts and the program of deregulation, which, he claimed,  “benefitted the people who needed it most,” those “in the middle, and the lower rungs.” It’s little wonder that Trump would train his benevolence on the little people, because “he’s a blue-collar guy” who “worked for years in the construction yards, with all kinds of folks, all colors,” Kudlow informed Perdue’s listeners.

Enlivened by these bald lies, and perhaps feeling a competitive spark, Perdue replied that Trump is “the embodiment of the amazing spirit that built this country.” He sounded quite satisfied after a year spent campaigning for his boss while inflicting lasting damage to poor people and food-system workers during a deadly pandemic that the administration did so very little to control.