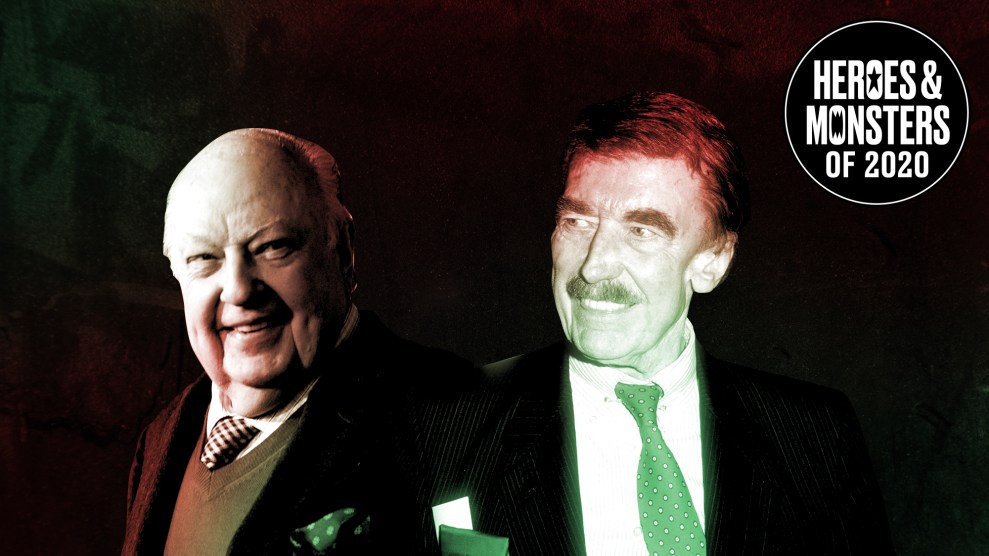 Imagine having the power to save tens of thousands of lives—maybe even more—with no more than a few simple gestures, and not doing so. How monstrous would that be? It is hard not to anoint Donald Trump as the uber-monster of 2020. Had he done the bare minimum and consistently advised Americans to wear masks and practice social distancing during the horrific coronavirus pandemic, there is no doubt that thousands upon thousands of Americans who have been lost to COVID-19 would have survived this killing year. Put aside the arduous task of standing up an extensive national testing and contact-tracing program—which Trump could not be bothered with—he still could have prevented so much death by saying (and repeating) the advice of his own public health experts. Yet he could not bring himself to do that. Consequently, many of our neighbors and fellow citizens perished, and this month we have experienced a daily 9/11 death toll. Instead of even acknowledging this devastation, Trump mounted a political coup in a clownish but dangerous attempt to overturn the election and subvert American democracy.

Trump is the villain of the year. Of the decade. Perhaps of the century. (It’s early.) But let’s take a step back: Who are the monsters and villains behind this depraved soul who has robbed so many families of their loved ones? Who delivered him—who unleashed him upon America? Who has made possible his assault on democracy and the nation’s public health? No doubt, many helped place Trump on the path that brought him here. But two deserve special honors: Fred Trump and Roger Ailes.

They are both long gone. Trump’s father died in 1999, and the creator of Fox News expired in 2017. But in 2020, their evil influence and malfeasance lived on and led to tens of thousands—perhaps hundreds of thousands—of deaths.

Trump, as many have observed, is a broken human being, a pathological narcissist with no empathy who promotes hatred and division. His deeply rooted flaws shaped his inept and uncaring response to the pandemic. Because he did not want the crisis to interfere with his reelection prospects, he downplayed and lied about the coronavirus. And because of that, people died. Trump, of course, is responsible for his own misdeeds and character defaults. But this year, we learned that much of his ugly soul was molded by his father.

In her best-selling book, Too Much and Never Enough: How My Family Created the World’s Most Dangerous Man, Mary Trump, Donald Trump’s niece, presents a horrifying portrait of Fred Trump. She chronicles how the family patriarch had destroyed his oldest son (her father), Fred Jr. (Freddy had defied his father’s wishes to take over the family real estate business and opted to become a commercial pilot.) Donald watched his father demolish his older brother, and that trauma warped his character. The book is full of anecdotes revealing how the family cauldron forged by Fred Sr., a cold-hearted and awful person, had yielded the mean-spirited, bullying, vengeful, bigoted, misogynistic, dishonest, insecure, self-obsessed Donald Trump, a man thoroughly unequipped to handle a pandemic and serve a much-in-need public.

Trump might have been widely disparaged and forsaken by all—including Republicans and conservatives—for his profound mismanagement of this historic national emergency, had it not been for his chief enabling force and amen choir: Fox. In 1996, Ailes, a former Republican campaign consultant, launched Fox for Rupert Murdoch as a conservative cable news platform. Two decades later, it became a zealous cheerleader for Trump’s presidential campaign and then the equivalent of state television for Trump’s cult-of-personality presidency. Whatever Trump said—be it disinformation or not—Fox eagerly amplified the message. He was the network’s great cause. It constantly reaffirmed Trump as the dear leader for right-wingers and GOPers. It defended him against all accusations. It unceasingly countered and attacked reality-based media that reported on Trump’s lies, deceits, and wrongdoing. It reinforced Trump worship as the holy faith of the right. It promoted him as an infallible champion and characterized criticism of Trump as nothing but leftist whining from the “fake news media” and nefarious plotting from a Deep State.

When Trump downplayed the coronavirus, Fox downplayed the coronavirus. When Trump called it a hoax, Fox called it a hoax. When Trump refused to prioritize mask-wearing and social-distancing, Fox followed suit. Whatever Trump did in reaction to the pandemic—which often was not much—Fox backed him. As Trump tried to hornswoggle Americans into believing that he was handling the crisis perfectly, Fox echoed the carnival barker in chief. It covered for his failure to encourage Americans to adopt basic preventative measures, for his failure to model the appropriate behavior, for his failure to implement fundamental actions, such as widespread testing and tracing. It celebrated his super-spreading campaign rallies. Millions of Americans more readily believed Trump’s COVID lies because Fox was continuously broadcasting, bolstering, and mirroring his dangerous and lethal anti-reality. The propaganda system that Ailes had built worked with deadly efficiency. American lives ended because of this profit-generating operation.

Fred Trump and Roger Ailes did not live to see the creature they created fail the United States at a time of severe testing. They did not see the bodies pile up, a result of Trump’s incompetence and uncaring. But they each helped Trump become who and what he is: a president whose reckless, self-centered, and irresponsible actions have contributed to the deaths of a great many Americans. They are the monsters behind this monster.