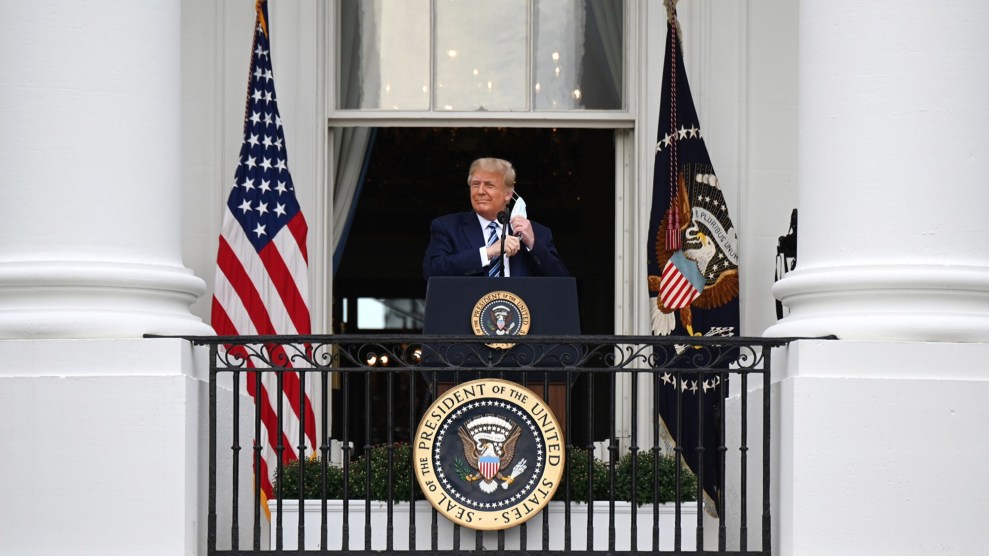 Though it’s been clear for quite some time that President Donald Trump’s handling of the coronavirus pandemic has been both haphazard and lethal, it’s not been easy to know what was going on inside the White House among the president and his advisers that set the stage for the skyrocketing infection rate and the deaths of 313,000 people.

A piece from the Washington Post, published Saturday, compiles the reflections of 48 senior administration officials, government health professionals, outside advisers, and others to present one of the most comprehensive analyses yet of how, as the Post puts it, the US walked headlong into the “pandemic’s dark winter.”

“I think he’s just done with COVID,” one of the president’s closest advisers told the Post. The president’s initial reluctance to take the pandemic seriously, at least publicly, is well documented. As is his early acknowledgement to Bob Woodward that the situation was much more dire that he wanted to let on publicly. (He told Woodward in a February phone call, that the virus was actually “more deadly than your strenuous flus” and was “deadly stuff.”)

But now, with the benefit of nearly a year of experience, conversations with those who’ve had a front row seat to the administration’s mishandling of the pandemic led the Post to conclude that the suffering has been “compounded over time by a host of damaging presidential traits—his skepticism of science, impatience with health restrictions, prioritization of personal politics over public safety, undisciplined communications, chaotic management style, indulgence of conspiracies, proclivity toward magical thinking, allowance of turf wars and flagrant disregard for the well-being of those around him.”

A few of those interviewed defended the administration. They point to the ramp-up of ventilators—even as he boasted of delaying aid to Democrat-run states—and the delivery of two vaccines in under a year, which involves an incredibly complex process of research, testing, and approval that typically takes much longer. But, one source told the paper, complex accomplishments are overshadowed by the lack of leadership in supporting simpler practices that could have saved lives.

“What the Trump administration has managed to do is they accomplished—remarkably—a very high-tech solution, which is developing a vaccine, but they completely failed at the low-tech solution, which is masking and social distancing, and they put people at risk,” said Paul Offit, director of the Vaccine Education Center at Children’s Hospital of Philadelphia and a professor of vaccinology at the University of Pennsylvania.

Peter T. Gaynor, a FEMA administrator, mocked the masks, comparing them to jockstraps, the paper reported.

The Post reports that an effort to manufacture and distribute 650 million three-ply cotton masks quickly came together in mid-March. But senior members of the president’s coronavirus task force questioned how much the masks would cost and how they would be delivered. Peter T. Gaynor, a FEMA administrator, mocked the masks, comparing them to jockstraps, the paper reported. Additionally, distribution of the masks through the US Postal Service was a “nonstarter.” Trump has long nurtured personal animus toward the agency because of its deals with Amazon owner Jeff Bezos, who also owns the Post. Several of the president’s top advisers also convinced him to “think of the masks as a cultural wedge issue” and use mask mandates as a way to animate his political base.

The Post includes other examples of the bungled response. Consider the appointment and prominence of Dr. Scott Atlas, a neuroradiologist with no infectious-disease or public health background who happened to catch the attention of Jared Kushner, Hope Hicks and another adviser during his television appearances. Atlas pushed a “herd immunity” strategy, the paper reported (which Atlas denies), and his thinking was influential with the president. “Dr. Scott Atlas has caused people to lose their lives because he stood at the White House podium and told people masks may not work, and he told people we should get over it and build up herd immunity,” Kyle McGowan, the CDC chief of staff until August, told the Post. “He’s telling the world lies from a bully pulpit, from a position of power, and I believe people died because of that.”

Ashley Parker, one of the Post reporters who penned the piece, notes that Trump is hardly alone when it comes to the problematic approach:

The Post reports that the mixed messaging and downplaying of the severity of the pandemic has continued into the holiday season and the lame duck session of his presidency, with Trump and his wife, Melania, as well as Vice President Mike Pence and his wife, hosting indoor holiday parties, regardless of the danger to which they’re exposing their guests and, more alarmingly, staff required to work. “At least one worker who got infected never heard from anyone in the White House about the illness,” the Post reports. “They were replaced for the next party.”

For additional detail and context as the pandemic has unfolded, see Mother Jones’ timeline of key moments along the way.