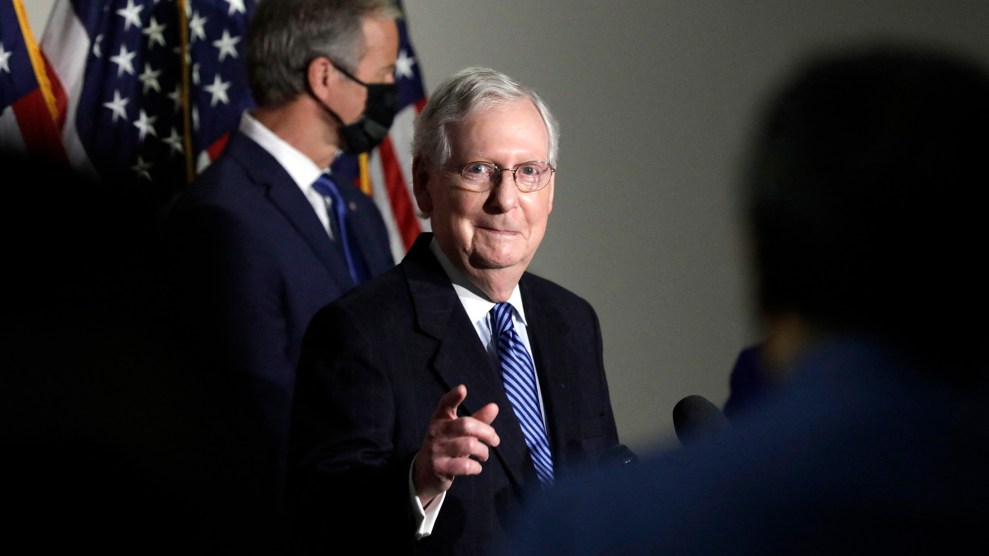 Congress is poised to pass a long-awaited $900 billion COVID-relief package that will bring temporary economic assistance to struggling families, as the country approaches a new year and the 11th month of a pandemic that has killed almost 320,000, upended livelihoods, shuttered businesses, and plunged millions into poverty—even as the nation’s wealthiest citizens have fared quite well.

The bill’s additional unemployment benefits alone will keep nearly 5 million people from falling into poverty next month. But given that vaccines are unlikely to be widely available until the mid-summer, experts say this stimulus will provide, at best, a temporary and incomplete solution for families and for the broader economy.

“Congress has given itself little choice but to immediately get to work on the next economic stimulus package.”

The limited aid means workers won’t have a substantial cushion “until a point closer to when the vaccine can roll out and people can go back to their shuttered occupations,” Andrew Stettner, senior fellow at the Century Foundation, says in a statement. “Congress has given itself little choice but to immediately get to work on the next economic stimulus package as soon as President-elect Biden takes office.”

The bill contains two programs for putting cash into the hands of families who need it, thereby stimulating spending and the economy. The first one provides one-time stimulus payments of $600 to all who qualify. The other consists of extensions on different forms of unemployment assistance, and will expire in mid-March or early April. These include:

“This is a lot better than nothing,” says Heidi Shierholz, a senior economist and the director of policy at the Economic Policy Institute. “But it is not enough. Millions of people will exhaust those benefits in the middle of March.”

None of the unemployment extensions are retroactive, and some are less generous than the proposals put forth by Democrats earlier in the pandemic. The $300/week top-up, for instance, is half of what the Democrats wanted. The CARES Act enacted in March, which included a $600/week enhancement that expired July 31, has been credited with preventing jobless Americans from falling off an income cliff early in the pandemic—and even allowing many to save. But in the five months since those extra benefits have expired, recipients have blasted through their savings, and then some.

The lack of retroactivity for these new benefits, “is a terrible missed opportunity to alleviate suffering and help the economy,” says EPI’s Shierholz. In addition, according to Stettner of the Century Foundation, the 11-week extension is unprecedented in its brevity. Unemployment extensions are often passed during tough economic times, he explains, including in the wake of the 2008 financial crisis. The norm is at least 13 weeks. A relief proposal unveiled earlier this month by Sens. Mitt Romney and Joe Manchin would have extended benefits for 16 weeks. But that was curtailed at the last minute, probably to make room for the $600 stimulus checks, according to the Washington Post.

“Trading those things off is really bad economics,” Shierholz points out. “Stimulus checks should never make unemployment benefits less generous as a result.” That’s because, while both are helpful, unemployment benefits are targeted to people who will immediately spend, not save, the cash, providing a stronger stimulus effect.

“This is a good bridge to the other side of the Trump administration,” Mark Zandi, the chief economist at Moody’s Analysts, told CNBC. “But a lot more building needs to be done to avoid an eviction crisis.”There are additional benefits in the new relief package set to expire quickly. The legislation extends the eviction moratorium imposed by the Centers for Disease Control and Prevention this fall, but only for one month, until the end of January. The bill contains $25 billion in rental assistance to help tenants cover back rent, since the eviction moratorium does not cancel their debts to landlords. But this rental assistance pales in comparison to the estimated $70 billion in back rent, late fees, and unpaid utilities tenants will owe as of January 1.

Lawmakers also failed to include aid to state and local governments, which are strapped for cash after months of lockdowns and feeble economic activity. Shierholz calls this an “egregious omission” on the part of Congress that could slow economic recovery, including that of individual households, for years to come.

“Leaving state and local aid out from this bill will deeply and negatively affect the strength of our recovery.”

“State and local aid is crucial to the pace of the recovery,” she says. That’s because states and local governments typically have balanced-budget requirements. Lacking aid, they will be forced to make huge cuts, creating an economic slowdown. This is precisely what happened in the 2008 crisis, Shierholz notes, when Congress provided insufficient assistance to state and local governments, resigning those regions to extended periods of austerity, delaying recovery “from the Great Recession by over four years,” she says. “So Congress leaving state and local aid out from this bill will deeply and negatively affect the strength of our recovery.”

The legislation is expected to get a vote on the House floor on Monday night, and likely a Senate vote late on Monday or in the wee hours on Tuesday.