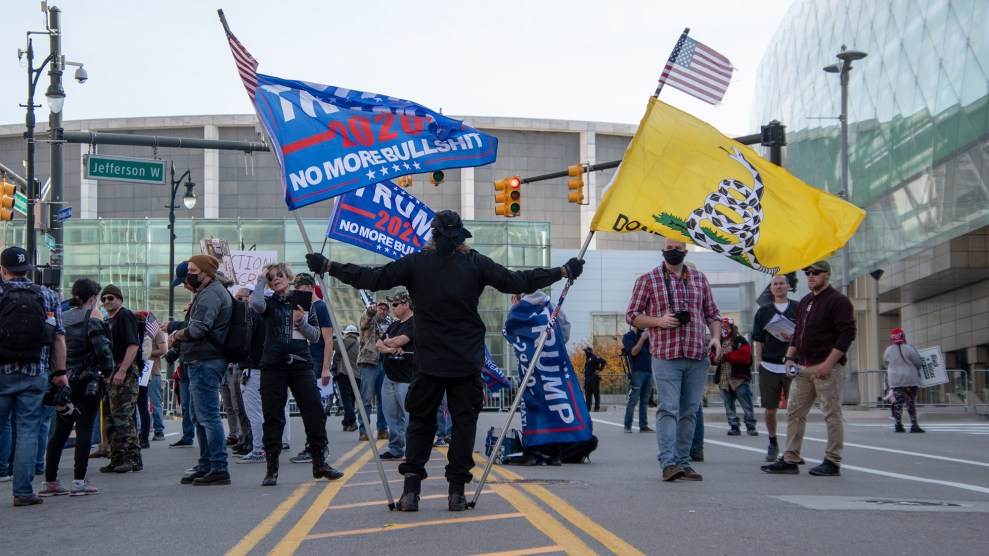 Trump supporters showed up to protest the voting results at the TCF Center in Detroit, Michigan on November 6th, 2020 where absentee ballots were counted for the city. dam J. Dewey/NurPhoto via ZUMA Press

The two Republican members of the Wayne County Board of Canvassers, who on Tuesday night tried to block certification of the county’s votes Tuesday night before relenting under withering local criticism, are now attempting to “rescind” their certification, claiming that they were duped into agreeing to certification based on the false promise of a state audit.

Tracy Wimmer, a spokesperson for Secretary of State Jocelyn Benson, said the board’s decision to certify cannot be rescinded. “There is no legal mechanism for the board members to rescind their vote,” Wimmer said, “their job is done, and the next step in the process is for the Board of State Canvassers to meet and certify.” That meeting, when every county’s election results will be certified, cementing Vice President Joe Biden’s victory in the state by nearly 150,000 votes, is slated for Monday.

“There is no legal mechanism for the board members to rescind their vote.”

The Republican members’ attempt to once again change their votes, this time to benefit the president, came after they were directly contacted by him. Monica Palmer, the Republican chairwoman of the county’s canvassing board, told the Detroit Free Press that Trump had called her after the contentious Tuesday-night meeting to make sure she “was safe.” The other Republican board member, William Hartmann, also spoke with the president, according to the Associated Press.

The Republican members of the county canvassing board said they only agreed to certify the county’s results on Tuesday night after being assured that the Secretary of State’s office would facilitate an independent audit of the county’s results. Jonathan Kinloch, the board’s vice chairman and a Democrat, has since told the Detroit News that while he intended to ask for such an audit, he hadn’t spoken to Benson’s office about the proposed audit at the time of the board’s certification vote—and that Palmer and Hartmann knew that. Additionally, he told the paper, the two Republicans agreed on Tuesday night to a motion waiving additional consideration after the vote to certify. On Thursday, Benson’s office released a statement promising “routine local performance audits…in Wayne County and any other local jurisdictions where the data shows significant clerical errors”—but only after certification.

The Detroit precincts under consideration for audit were out of balance—a situation where the number of voters who checked in doesn’t match the number of votes ultimately counted—by “a few hundred votes,” a minuscule number compared to either the roughly 878,000 ballots cast in Detroit or the 150,000 statewide margin separating Biden and Trump.

Trump’s campaign, which has filed a flurry of lawsuits in several states to overturn election results, withdrew one federal lawsuit in Michigan on Thursday morning on the premise that the Wayne County certification had not taken place. Rudy Giuliani, Trump’s personal lawyer, said they did so “as a direct result of achieving the relief we sought: to stop the election in Wayne County from being prematurely certified before residents can be assured that every legal vote has been counted and every illegal vote has not been counted,” according to the Detroit News.

In fact, it seems Wayne county’s certification will stand, representing yet another Trump legal failure notched in courtrooms across the country. The record points to a strategy not based on winning cases, but on creating enough delay and unfounded doubt about the legitimacy of the election in key states, such as Michigan and Pennsylvania, such that the Republican-controlled legislatures have a premise to step in and appoint alternate electors who would support Trump in the Electoral College for Trump.

While Michigan’s Republican senate majority leader, Mike Shirkey, recently recognized that Biden won the election and said that wouldn’t happen in his state, on it was reported Thursday that Shirkey and Rep. Lee Chatfield, the Republican speaker of the state house, are headed to the White House on Friday for a private meeting with Trump. A spokesperson for Chatfield did not respond to a request for comment.