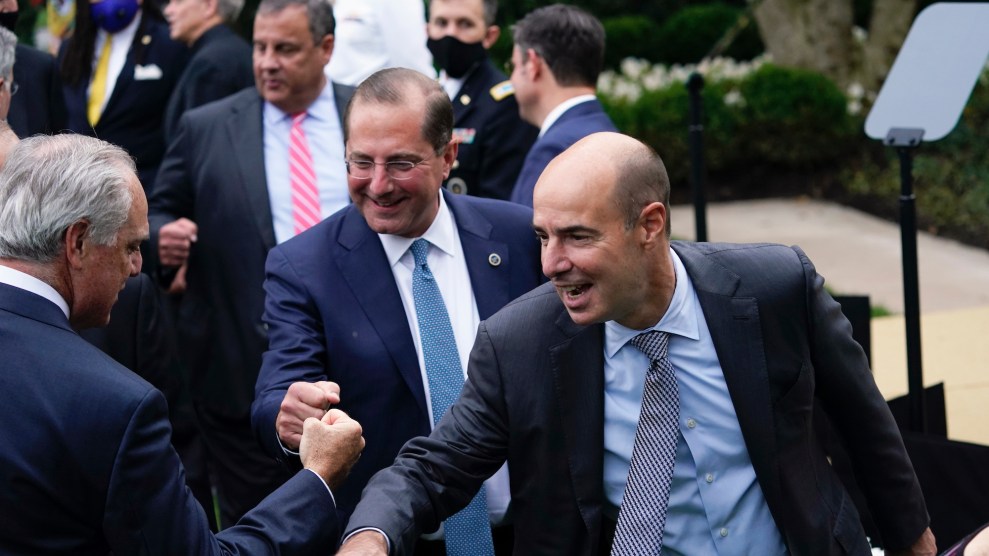 At a briefing on Oct. 4, in the wake of the COVID-19 outbreak that has enveloped President Donald Trump and about a dozen of his close associates, White House press secretary Kayleigh McEnany declined to reveal how many workers at the White House had contracted the virus. She cited “privacy concerns we take very seriously.” Within 24 hours, McEnany herself—who didn’t don a mask while addressing reporters—and two of her assistants had tested positive for the disease; as had two White House housekeeping staffers, who “didn’t come in direct contact” with the first family, reported New York Times correspondent Maggie Haberman. Meanwhile, at least three reporters who cover the president closely have been diagnosed with COVID-19.

In short, after doing precious little to protect workers as the coronavirus has blitzed places like meatpacking plants and Amazon warehouses since March, the Trump Administration’s Occupational Safety and Health Administration has a new workplace COVID-19 hotspot to (not) contend with: the White House. OSHA, as it’s known, has existed since 1970 to “assure safe and healthy working conditions for working men and women by setting and enforcing standards and by providing training, outreach, education and assistance.”

OSHA law obligates each federal agency, including the Executive Office of the President, to “furnish to each employee employment and a place of employment which are free from recognized hazards that are causing or are likely to cause death or serious physical harm.” Now that Trump has returned to the stately residence and presidential workplace and promptly taken off his mask, what is OSHA doing to protect the workers there?

The press office of the Department of Labor, which houses OSHA, has not returned requests for comment on the outbreak. But the number of potentially impacted workers in not trivial. As of 2017, the president’s staff of salaried assistants and advisors totaled 377. As for custodial, food-preparation, and landscaping staff, it’s hard to find a headcount for the vast facility. “There are hundreds and hundreds of people who work on-complex, some who have families with high-risk family members,” an unnamed senior White House staffer told New York Magazine recently. Just as workers in meatpacking plants have consistently complained of not being informed of spiraling workplace outbreaks by their employers, and having to rely on media accounts for information, “Ninety percent of the [White House] complex most certainly learned about it in the news, as has been the case ever since,” the senior official told New York. “Since this whole thing started, not one email has gone out to tell employees what to do or what’s going on.”

The folks in charge at the White House—led by mask skeptics Trump and Chief of Staff Mark Meadows—have little to fear from the federal worker-safety agency.

Meanwhile, Eugene Scalia, the labor department’s secretary (and son of the late Supreme Court justice Antonin), may himself have been exposed, by attending the now-infamous potential “super-spreader” White House events on Sept, 26 to celebrate Amy Coney Barrett’s nomination to the Supreme Court. Along with his wife, Patricia, and his mother, Maureen, Scalia sat on the second row at the tightly packed outdoor Rose Garden ceremony, and “all three also were inside the White House for a private reception with Trump and Barrett,” the Washington Post reports. “Scalia also attended an indoor private fundraiser the night before, on Sept. 25, at the Trump International Hotel. Trump was there, as well as Republican National Committee chair Ronna McDaniels, who has tested positive.” At all these events, Scalia declined to wear a mask. So far, he has tested negative for the virus.

Despite the labor secretary’s own brush with the disease, worker-safety experts say White House employees should expect little protection from OSHA as they go on about their jobs. Scalia, now in his second stint at the labor department amid a long career as a “management-side” labor lawyer defending corporations against worker complaints, has maintained a laissez faire approach to worker safety during the COVID crisis.

Debbie Berkowitz, who worked at the agency during the Obama administration and now advocates for workers’ rights at the National Employment Law Project, noted that “OSHA has not set any specific requirements for employers to implement to protect workers from COVID-19 exposure at work,” and “has done almost no enforcement—and the little enforcement they did is following deaths.” In meatpacking plants, at least 44,633 workers have tested positive for COVID and 213 have died—and yet the agency has issued just two fines, both for less than $16,000, against companies with billions of dollars in annual profits. So the folks in charge at the White House—led by mask skeptics Trump and Chief of Staff Mark Meadows—have little to fear from the federal worker-safety agency, Berkowitz said.

David Michaels, who served as OSHA’s administrator under President Barack Obama and is now a professor of occupational health at George Washington University, had a pithier take on what White House workers can expect from the agency: “I think OSHA has more important places not to intervene.”