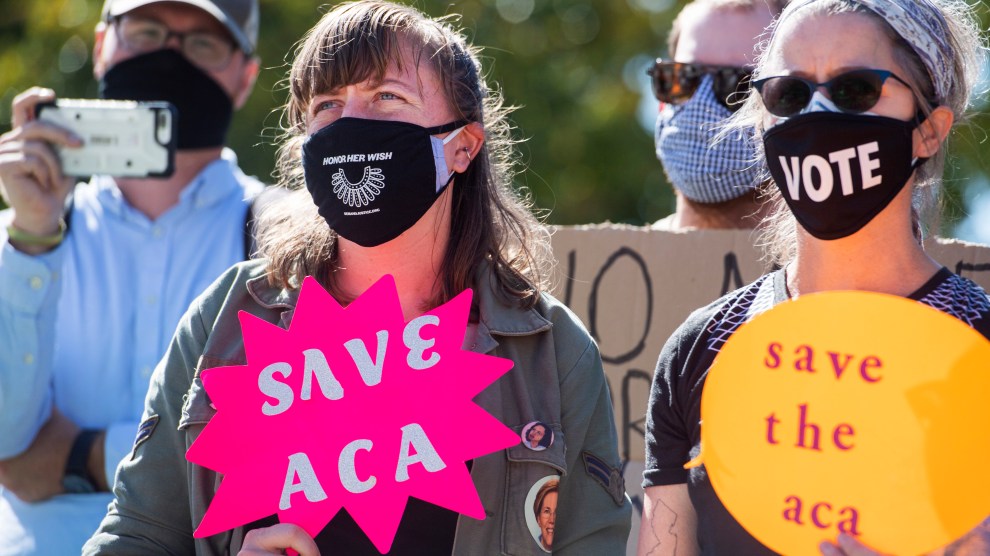 Artist and prop-maker Dara Williamson visited the gynecologist for the first time when she was 25, after realizing that her health coverage on her mother’s high-quality insurance plan was set to expire on her 26th birthday. Williamson, now 34, says that an ultrasound that day in 2012 revealed “two giant cysts where my ovaries should have been”—so large that her doctor feared she could suffer ovarian torsion, in which the ovaries painfully twist around on themselves. A team of doctors decided that she needed a laparoscopic cystectomy, and she had the surgery just days before her insurance lapsed.

Williamson was able to stay on her mother’s plan as long as she did in part because she lived in Illinois, which had passed a law in 2008 requiring insurance companies to raise the maximum age for dependent coverage to 26. Two years later, a similar law would apply to young adults in every state, thanks to a provision in the Affordable Care Act, better known as Obamacare.

Now, the Supreme Court—with Amy Coney Barrett as its sixth conservative justice—is set to hear a Republican-backed lawsuit that could undo the entire ACA. Striking down Obamacare wouldn’t just strip health insurance away from the 23 million Americans who purchased plans through their state marketplaces and from many of the 12 million more who enrolled in the law’s expanded Medicaid program; it would also get rid of popular provisions like protections for people with preexisting conditions and the increased age limit for dependents.

In 2010, before the ACA was enacted, young adults were more likely to be uninsured than any other age group. More than one third of people aged 19 to 25 lacked insurance, compared to a 16 percent uninsured rate for people of all ages, according to the Centers for Disease Control and Prevention. But over the following decade—after Obamacare granted young adults the right to remain on their parents’ health plans until they turned 26—they gained coverage at higher rates than any other age group, according to the Census Bureau. The Department of Health and Human Services estimates that 2.3 million young adults gained insurance through their parents’ private plans between 2010 and 2013, before other parts of the ACA took effect, and another 3.8 million gained insurance by purchasing plans on their states’ health care marketplaces between 2013 and 2016. Other young people gained private insurance thanks to an Obamacare provision penalizing large employers who fail to provide health coverage.

The gains in coverage for young adults under the ACA bely the myth of the “young invincible” who refuses to get health insurance because he thinks he won’t need it. Instead, the data suggest that young people faced serious obstacles to accessing coverage that were mitigated by the ACA. And even young, healthy people need insurance, says Katherine Hempstead, a senior policy adviser at the Robert Wood Johnson Foundation. Such coverage can be used for potentially lifesaving preventative care like Williamson’s visit to the gynecologist, or for behavioral health services to treat substance abuse or mental health issues.

Aside from a 2016 interview in which he expressed support for allowing dependents to stay on their parents’ plans until age 26, President Donald Trump has been largely mum on the potential impact that overturning the ACA might have on young adults’ ability to obtain coverage. Despite asking the Supreme Court to strike down Obamacare and repeatedly vowing to replace it with something better, Trump has never revealed an actual plan to accomplish that.

The day after the 2020 vice presidential debate, 19-year-old Shaterra Robinson was scrolling through Twitter when she came across a video of Sen. Kamala Harris warning about the consequences of Trump’s efforts to invalidate Obamacare. “If you have a preexisting condition—heart disease, diabetes, breast cancer—they’re coming for you,” Harris said. “If you are under the age of 26 on your parents’ coverage, they’re coming for you.”

Robinson, a sophomore at Howard University, retweeted the video, adding, “Trump wants to drop the age limit for being on our parent’s insurance from 26 all the way down to 18. Before you decide not to vote, think about how many Black young adults who can’t afford to start paying for their own insurance at 18. Let’s not forget we’re still in a pandemic!”

Robinson intended her tweet to reach only her followers, mainly college classmates and a few friends from high school. But the message hit a nerve, unexpectedly garnering more than 200,000 likes and 93,000 retweets.

In practice, it’s unclear whether ending Obamacare would cause the dependent age limit on most policies to fall all the way down to 18, Hempstead says. Even before the ACA was enacted, 37 states, including Illinois, had extended the age that young adults could stay on their parents’ plan past 18. And because the provision is so popular among workers, Hempstead doesn’t envision employers immediately rushing to lower the age limits on the plans they offer. But if the economy continues to weaken, more young adults could start losing this coverage. “If times are really tough, I think there would be pressure on employers to maybe start whittling that back a bit,” Hempstead says, “because that would be a way to save money.”

Harold Pollack, a health policy expert and professor at the University of Chicago, says that if Obamacare were struck down, politicians would probably push to restore the dependent age extension. And some companies that could afford to maintain the policy would likely do so. “I think that the marquee employers would keep it because it would just produce enormous employee resentment,” he said. “But I think that other employers would probably drop it, especially if it were in the context of difficulties for the company.”

Hempstead stresses that even if many young adults continued to be eligible for their parents’ plans until they turn 26, the end of the ACA would bar them from accessing health care in other ways. Not everyone’s parents are insured, and young adults who access care through expanded Medicaid or their state’s health insurance marketplace would have no other options.

Robinson’s intention in sending the tweet was not to delve into the nuances of what would happen if the ACA’s protections were eliminated, but simply to encourage her classmates to vote. “I feel like they have lost a lot of hope in this country and the way it’s governed and the people that rule it,” she says. “I just wanted my classmates to know we’re affected by these decisions.”

Robinson says that attending a historically Black university has made her aware of racial health disparities—for example, people identifying as Black or African American are 2.6 times as likely to contract COVID compared to white people, and 4.7 times as likely to be hospitalized, according to the CDC. Robinson suspects that ACA repeal would disproportionately affect Black young adults. “As a minority, as a marginalized group, I feel like it’s even harder for a lot of us, especially those who are not in college…because they don’t even have the option of college health insurance,” she says.

Health care is one of the most important issues for Robinson, a first-time voter who says she registered after hearing about the possibility of the ACA being struck down. “I think that just how much this country has lost and suffered in this pandemic shows how incompetent the current president and his administration is,” she says. “This is not a good time to want to repeal or try to do anything to insurance that so many people are relying on.”

Williamson, who has had intermittent health coverage over the last decade, sees this election as a matter of life and death. “We can either live in a state where we do our best to take care of each other, or we can fall back into the barbarism that’s been creeping up on us,” she says. “I am very definitely voting for whoever does not take away my health care, and who at least seems to acknowledge that my life as a citizen matters.”