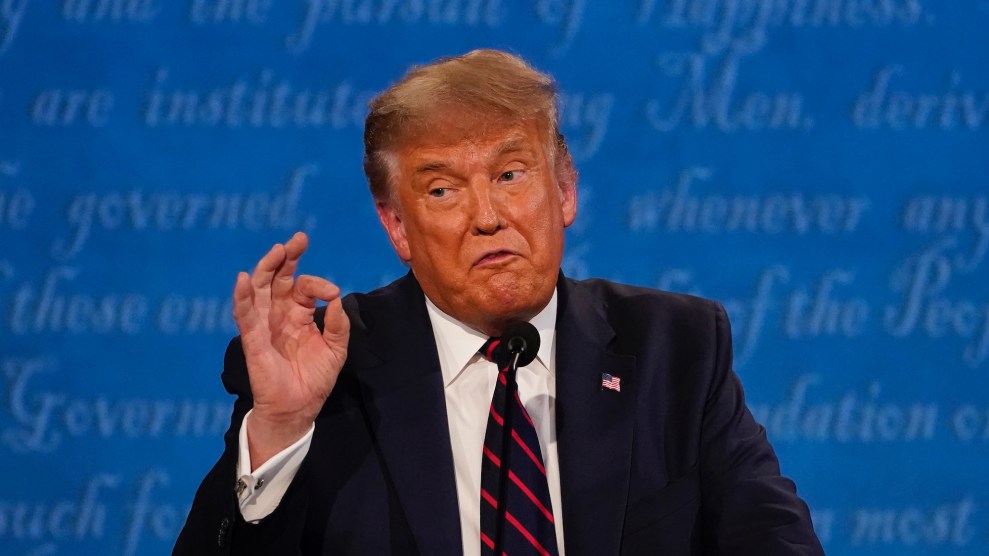 When Chris Wallace pressed Donald Trump last night on the New York Times report that Trump had paid $750 in federal income taxes in 2016 and 2017, the president gave a rambling response. But he eventually declared that he had paid “millions of dollars. And you’ll get to see it.” That raised the obvious question: When?

We put the question to the White House, which offered its stock excuse for sidestepping decades of presidential precedent by shielding Trump’s tax info from public view: Trump will gladly release his returns…when an IRS audit that Trump claims has been underway for years is over. “He has said many times when the audit is concluded he would release them,” White House spokesperson Judd Deere said. (There is no reason an audit would prevent Trump—or any taxpayer—from releasing his returns. In fact, by law, every president’s returns are audited annually.)

Last year, Donald Trump’s onetime lawyer and fixer, Michael Cohen, told Congress he didn’t know if there was really any audit, despite making this claim to reporters during the 2016 campaign. Cohen said he believed that Trump was frightened of having his tax returns scrutinized too closely.

“Statements he made to me…what he didn’t want was to have an entire group of think tanks that are tax experts run through his tax return and start ripping it to pieces, and then he’ll end up in an audit and he’ll ultimately have taxable consequences, penalties, and so on,” Cohen explained.

Trump has said he doesn’t think voters care if he releases his tax returns, noting that he won the 2016 election without releasing them.

I won the 2016 Election partially based on no Tax Returns while I am under audit (which I still am), and the voters didn’t care. Now the Radical Left Democrats want to again relitigate this matter. Make it a part of the 2020 Election!

Trump’s debate claim that he paid millions in taxes—not the pittance reported by the Times—seems dubious, and on Tuesday night, the Times released a detailed account explaining how it determined Trump had paid just $750 in taxes in 2016 and 2017. According to the paper, Trump paid no income tax at all in 10 of the last 15 years. In some cases, he appears to have made savvy use of the tax code. Yet the Times reported Trump may have also taken improper deductions and may now owe the Internal Revenue Service as much as $100 million in back taxes and penalties. Trump is already facing a huge cash crunch in the next few years, with more than $400 million in loans coming due in the early years of a theoretical second Trump presidential term.

The Times revelations come amid two ongoing investigations—one by New York Attorney General Letitia James, the other by Manhattan District Attorney Cy Vance—into potential bank and tax fraud by Trump and his company.

Trump has bragged about sidestepping taxes before. In the 2016 debates, Hillary Clinton tried cornering Trump about his taxes shortly after a bombshell news report revealed he had used nearly a billion dollars in losses in 1995 to avoid paying income taxes for years. When asked if he used loopholes to avoid taxes, he responded, “Of course I do. Of course I do.” Then Trump went on to lay the blame for his tax avoidance at Clinton’s feet, saying she helped create a tax code favorable to people like him.

“She has given it to us,” Trump said.

Trump employed similar tactics at last night’s debate, complaining that Biden hadn’t fixed the tax code when he was in office. “I don’t want to pay tax,” he noted, adding that as a “private developer” he had gamed the tax system like any other businessman “unless they’re stupid.”