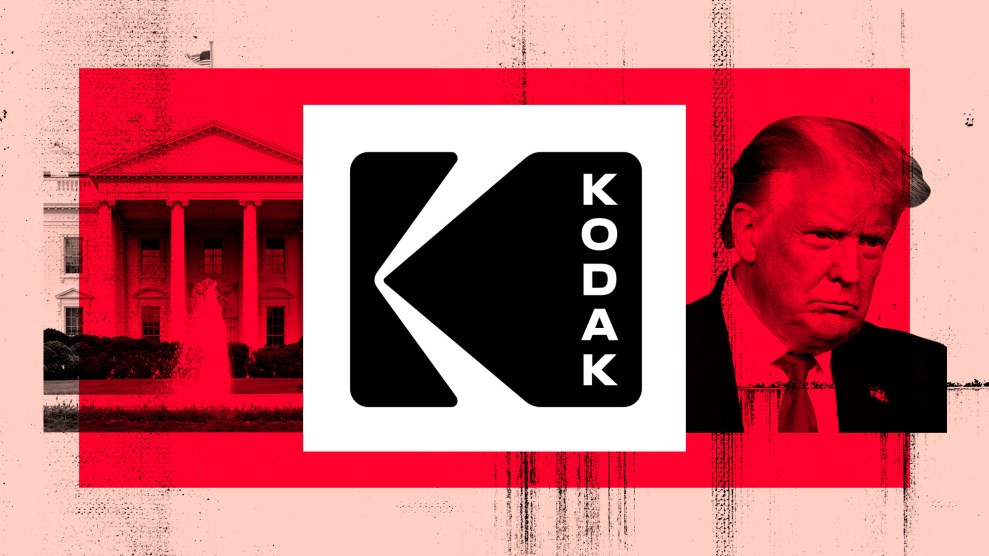 In August, Kodak and the Trump administration ran into a scandal, when word leaked that the once-mighty film giant was in contention for a massive and unprecedented $765 million federal loan (to manufacture ingredients for prescription drugs) and its stock price soared, giving rise to speculation about insider shenanigans. Last week, Kodak released the results of a review conducted by the law firm Akin Gump Strauss Hauer & Feld that concluded Kodak and its top brass “did not violate the securities regulations or other relevant laws, engage in a breach of fiduciary duty, or violate any of Kodak’s internal policies and procedures.” House Democrats questioned the finding and why the Trump administration—via a little-known federal agency headed by a former roommate of Jared Kushner—would consider handing such a loan to Kodak. Moreover, the report failed to fully explain a curious aspect of the controversy: a gargantuan transfer of stock by board member (and billionaire) George Karfunkel to an Orthodox Jewish congregation in Brooklyn called Chemdas Yisroel that had practically no public profile but that he controlled as its president and chief financial officer.

In fact, Akin Gump’s investigation of the Karfunkel transaction seemed somewhat cursory, with the report suggesting the law firm didn’t do much more than ask Karfunkel about it. One House Democrat, who has tried to gather information on Karfunkel’s transfer of Kodak stock, noted recently that this move still “raises many questions.”

Mother Jones was the first media outlet to report that Karfunkel’s stock gift to Chemdas Yisroel was highly unusual. According to the Akin Gump report, the value of the stock that Karfunkel donated to the congregation—during a day of wild trading triggered by news of the loan (when Kodak insiders were not allowed to buy or sell stock)—was $99.6 million. (It possibly was as high as $180 million.) As Rep. Josh Gottheimer (D-NJ) has pointed out, “This would be the single largest charitable gift to a religious institution in history.” And the handoff of this stock, which was worth about $6.4 million two days earlier, would have earned Karfunkel a whopping tax deduction.

What was unusual about this maneuver was that Congregation Chemdas Yisroel barely seemed to exist. It was incorporated in Delaware in December 2018 and registered as a New York charity in October 2019. Yet other than its corporate records, there were virtually no other signs of its operations. It looked as if Karfunkel, exploiting the surge in Kodak’s stock price, had moved $100 million in stock from his personal portfolio to a do-nothing (or do-little) religious entity (which, as such, does not file tax records publicly revealing its income or expenditures) that he himself was in charge of—and that Karfunkel would reap a massive tax benefit for doing so.

The Akin Gump report does not answer basic questions about this deal.

The review notes, “Karfunkel explained in his interview [with Akin Gump attorneys] that he founded Chemdas a few years ago, and it distributes over $10 million per year in charitable donations through the organization. Karfunkel explained in his interview that there are 45-50 full-time students at a Chemdas funded religious school in Brooklyn, and that there are classes three times a day. Chemdas has a rabbi and the congregation is open to the public.” But Chemdas Yisroel only registered with the New York State Attorney General’s charities bureau in October 2019. It is unclear whether it has been functioning for a “few years.”

The congregation lists its address at 1441 53rd Street in Brooklyn, which is the home of another synagogue, Congregation Tiferes Shulem D’Nadvorna, which was registered in 1989 with the Internal Revenue Service as a charitable organization. Several weeks ago, a plaque was added to the front of this building noting it was also the home of Chemdas Yisroel, according to one Nadvorna congregant, who asked not to be identified. He says he has seen no activity there related to any congregation other than Nadvorna.

Reached by phone this week, the rabbi who leads Congregation Nadvorna, Shloime Leifer, told me that he is “very connected” with Chemdas Yisroel. But he refused to explain the connection or discuss this other congregation. He asked if I am Jewish and then said, “I don’t have time for this. The reporters are for Biden, not for Trump.” He then hung up. The Nadvorna congregant says that Leifer has warned attendees of his synagogue not to talk to reporters about Chemdas Yisroel.

The Akin Gump report’s section on Karfunkel’s gift is mainly predicated on his word. The law firm says so explicitly: “Based on the information provided by Karfunkel during his interview, it does not appear that his charitable gift of Kodak shares…violated the federal securities laws.” The report continues: “Akin Gump’s conclusion on this issue is premised on the following. First, under existing regulations, a bona fide gift of shares does not constitute a sale of securities for insider trading purposes… Second, as a factual matter Karfunkel has represented that: (1) the gift of shares was bona fide and not in return for anything of value; and (2) the charity has not sold any of the gifted shares. Our conclusions rely heavily on these two facts, which we assume to be accurate based on Karfunkel’s representations to Akin Gump.”

This is hardly fierce investigating. The law firm obtained no records. It did not independently determine what happened to the shares after Karfunkel gave them to the congregation. It apparently spoke to no one else connected to the management of Chemdas Yisroel, even though the congregation’s two officers other than Karfunkel are identified in public records. And because of all this Akin Gump could not reach a firm conclusion on whether Karfunkel’s transfer was a legitimate gift to a legitimate charity: “Akin Gump’s ability to fully investigate the bona fides of the gift or the charity that received it was limited because we did not have access to the records of the charity and were unable to interview any of its officers or directors, with the exception of Karfunkel.”

The lawyers hired by Kodak also did not examine what tax benefits Karfunkel might have gained from this transfer, noting the “potential tax implications of Karfunkel’s gift are outside of the scope of Akin Gump’s investigation.” But they stated that though Kodak’s policies “did not clearly prohibit Karfunkel from making the gift…the circumstances of the gift raise significant concerns from a corporate governance perspective.”

So after all the law firm’s work, the Chemdas Yisroel mystery remains.

Karfunkel did not respond to a list of questions Mother Jones emailed him. Nor did Akin Gump. A spokesperson for the law firm says, “The firm has no comment about the report.” Kodak CEO Jim Continenza hailed the report as “a thorough independent review” and noted, “It is clear from the review’s findings that we need to take action to strengthen our practices, policies, and procedures.”

But the investigation of Karfunkel’s donation may not be over. Gottheimer, along with and Rep. Jimmy Panetta (D-Calif.), has attempted to do some of his own digging. On August 24, the two House members sent a letter to Chemdas Yisroel, using the address of Abraham Roth, the accountant who set up the charity and who is listed as its director, asking several basic questions: Who is the rabbi of Chemdas Yisroel and how can he be contacted? How many staff members are at the congregation? How many members does it have? Who are the executive officers of the congregation? What business holdings and interests do they have? What happened to the Kodak shares?

Their letter noted that Karfunkel’s donation made Chemdas Yisroel “one of the largest holders of Kodak stock” and that because Kodak “may be eligible for a substantial infusion of taxpayer dollars to begin the production of crucial pharmaceutical products in the interest of public health and national security, it is vital that Members of Congress have transparency into those owners of the company with substantial ownership stakes.”

On Monday, Gottheimer tweeted that he and Panetta had yet to receive any response from Karfunkel’s Chemdas Yisroel: “We haven’t heard zip.”