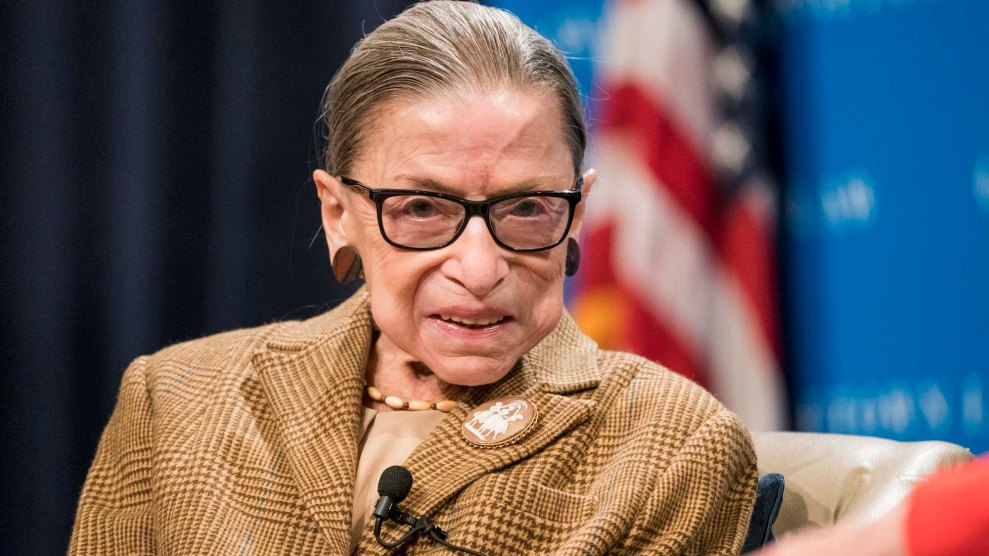 Supreme Court Justice Ruth Bader Ginsburg was a feminist icon, a tireless jurist, and a fearsome dissenter holding down the court’s liberal wing. But for the other members of the country’s highest court, where Ginsburg spent 27 years, she was also a colleague and, to some, a treasured friend. On Saturday, the Court released statements from its eight remaining members and former Justice Anthony Kennedy, reacting to Ginsburg’s death at age 87 from complications of metastatic pancreatic cancer.

Their tributes included the following memorials. You can read all the Justices’ statements here.

Elena Kagan reflected on a role model and mentor:

To me, as to countless others, Ruth Bader Ginsburg was a hero. As an attorney, she led the fight to grant women equal rights under the law. As a judge, she did justice every day–working to ensure that this country’s legal system lives up to its ideals and extends its rights and protections to those once excluded. And in both roles, she held to–indeed, exceeded–the highest standards of legal craft. Her work was as careful as it was creative, as disciplined as it was visionary. It will endure for as long as Americans retain their commitment to law. Ruth reached out to encourage and assist me in my career, as she did for so many others, long before I came to the Supreme Court. And she guided and inspired me, on matters large and small, once I became her colleague. I will miss her–her intellect, her generosity, her sly wit, her manifest integrity, and her endless capacity for work–for the rest of my life. I give my deepest condolences to her beloved children and grandchildren. May her memory be a blessing.

Louise and I have lost a cherished colleague and friend. For forty years, Ruth served the American people as one of our most distinguished judges. Her sacrifices for the country were many, but always performed with honor. We are blessed by the happy memories that will remain, like traveling with Ruth to London where (to her delight) an uninformed guide kept calling her “Ruthie,” or all the opera she tried so valiantly to teach me, or her sweet tooth at lunch, or the touching stories of her remarkable life with Marty. We will miss Ruth and our hearts go out to her family. May she rest in peace.

My dear friend and colleague Ruth Bader Ginsburg was an American hero. She spent her life fighting for the equality of all people, and she was a pathbreaking champion of women’s rights. She served our Court and country with consummate dedication, tirelessness, and passion for justice. She has left a legacy few could rival.

I will miss Ruth greatly. She welcomed me to the Court with a warmth I could not have expected, and I came to feel a special kinship with her. She was someone whose wisdom, kindness, and unwavering support I could always rely on. I will forever cherish the moments we shared.

I send my deepest condolences to her children, grandchildren, and great-grandchild. I know how much she treasured and loved you. She often said that leading a meaningful life means living for one’s family and one’s community, not for oneself. Ruth lived a profoundly meaningful life, and the numerous ways in which she changed ours will never be forgotten.

And in its few poetic words, Stephen Breyer’s stirring tribute was unforgettable in its own way.

I heard of Ruth’s death while I was reciting the Mourner’s Kaddish at the Rosh Hashanah service. I thought:

a woman of valour;

a rock of righteousness;

and my good, good friend.

The world is a better place for her having lived in it.

And so is her family;