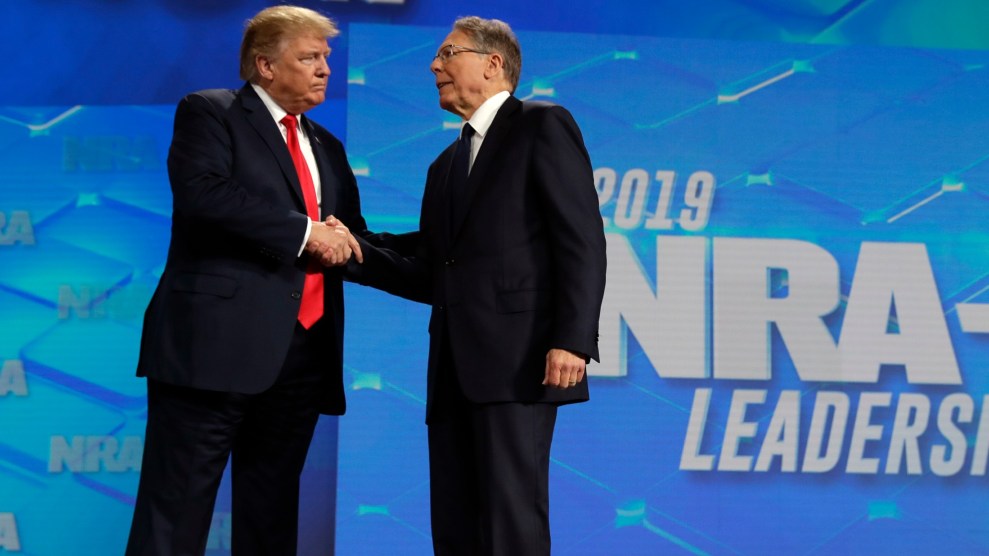 The future looked bright for the NRA at the end of 2016. Donald Trump had just been elected president—thanks, at least in part, to the $31 million that the gun rights group spent on the race—and rolling back a slew of firearms restrictions was a top priority for the GOP. “We have the next eight years alongside President Trump to undo the Obama transformation of America and set our country back on its rightful, righteous course of freedom,” NRA executive vice president Wayne LaPierre said in early 2017.

“There are now more judges on the lower courts and the court of appeals who take an extreme view of the Second Amendment.”

But less than two years later, the NRA fell from grace—and it fell hard. During the 2018 midterms, for the first time in recent history, gun control groups outspent the NRA, helping to usher in a new Democratic majority in the House of Representatives. And just this month, New York Attorney General Letitia James filed a groundbreaking lawsuit against the NRA, accusing it of widespread corruption and seeking to dissolve it in its entirety. But even amid these very public humiliations, the NRA has quietly—and successfully—worked to persuade Trump and Senate Majority Leader Mitch McConnell (R-Ky.) to nominate and confirm a series of judges who who are virulently opposed to gun control laws. All the while, the group has filed an onslaught of lawsuits against state gun regulations in hopes that the newly appointed judges will overturn them.

“There are now more judges on the lower courts and the court of appeals who take an extreme view of the Second Amendment and that are hostile to most gun safety laws,” says Hannah Shearer, the litigation director for the Giffords Law Center, the legal arm of the gun control group founded by former Arizona Rep. Gabby Giffords (D). In a report released Monday, the Giffords group noted that “these judges are ultimately responsible for deciding not only if many gun safety laws are constitutional, but also for determining the relevant legal framework for making this decision in the first place.” What that means, essentially, is that these judges determine how certain gun safety laws fit into the broad interpretation of the Second Amendment that the Supreme Court established in 2008 when it ruled that the Constitution gives Americans an individual right to own a gun but also stipulated that certain restrictions were permissible.

By the end of July 2020, Trump had appointed 201 federal judges to lifetime posts, putting him on track to exceed the number of first-term judicial appointments by any president in at least 40 years. Fifty-three of those appointments were appellate judges—more than any president has named in a single term since Jimmy Carter.

This sea change in the federal judiciary has already given a boost to what the Giffords report describes as the NRA’s “kitchen-sink litigation approach” of filing legal challenges to gun laws across the country. Currently, the NRA is involved in such lawsuits in at least 18 states. It only takes a couple of wins in a few courts with sympathetic judges to begin to shift legal precedents. Most recently, a three-judge panel of the Ninth Circuit Court of Appeals threw out California’s ban on high-capacity ammunition magazines, ruling that the law violates the Second Amendment. The appellate judge who wrote the panel’s majority opinion was Kenneth Lee, a Trump appointee who faced scrutiny during his confirmation hearing for past controversial writings on HIV and the LGBTQ community. “Even well-intentioned laws must pass constitutional muster,” Lee wrote, adding that the state’s ban on magazines holding more than 10 bullets “strikes at the core of the Second Amendment—the right to armed self-defense.”

For Shearer, the California decision is just the latest example that the tide is turning—and a warning that the real deluge could still be coming, thanks partly to the Supreme Court’s recent decision not to hear any new Second Amendment cases next term. The high court’s move effectively leaves the fate of a number of state gun laws in the hands of appellate courts, which have been packed with Trump appointees. The Giffords report points to other examples of Trump appointees who have argued that the Second Amendment should be interpreted in a way that would invalidate a wide array of existing gun laws. Don Willett, a Trump appointee to the Fifth Circuit, lamented that the Second Amendment is currently “spurned as peripheral,” “snubbed as anachronistic,” and “scorned as fringe.” Another Trump appointee to the Fifth Circuit, James Ho, has said that “the Second Amendment continues to be treated as a ‘second-class’ right.” And Stephanos Bibas, who was appointed to the Third Circuit in 2017, dissented from a decision to uphold New Jersey’s large-capacity magazine ban, accusing the panel’s majority of “subjecting the Second Amendment to different, watered-down rules.

“No matter how strong Democrats’ policy platform is on issues like gun safety, these laws are going to be challenged in the courts,” Shearer says. “Trump and McConnell have prioritized appointing judges with far more extreme views. And so they’re pushing gun safety issues and other issues far to the right.”