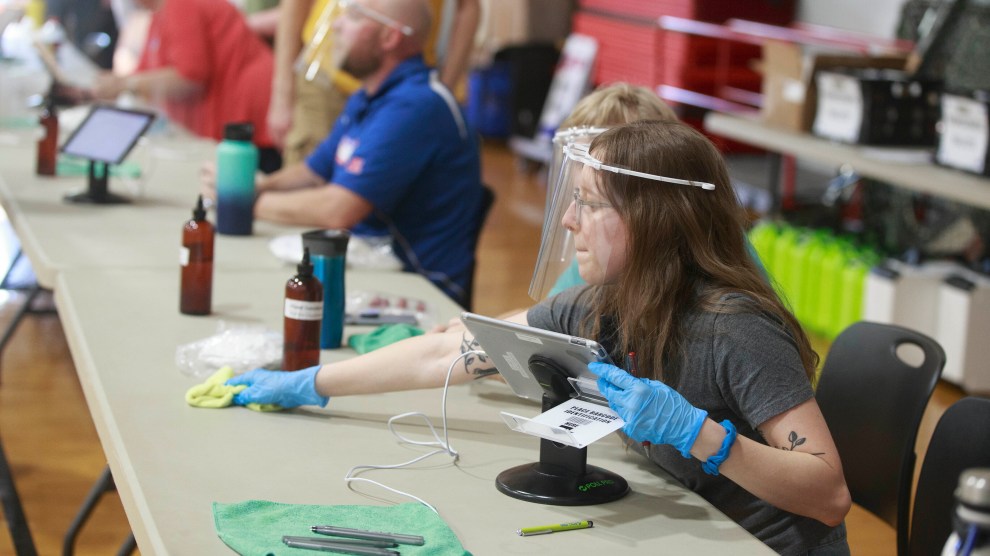 A poll worker sanitizes a table on Primary Day in Indiana.Jeremy Hogan/SOPA/Sipa/AP

In April and May, as the coronavirus ravaged places like New York City and Los Angeles, it looked as if Texas might somehow make it through the pandemic largely unscathed. But then the state’s case counts began to rise precipitously—just in time for its May 26 primary runoff election.

Rather than expand mail voting, Texas’ Republican governor, Greg Abbott, pushed the election to July 14. But by then, things were even worse. Some assisted living centers and residential care facilities that would normally serve as polling places refused to host the election, the Texas Tribune reported, because the populations who lived there were especially susceptible to developing severe complications from COVID-19. Other polling places shuttered because their poll workers were afraid of getting sick.

“I’m young, and I have the time to give, and I wanted to be there, because I genuinely care if my community votes.”

“We had all of our election professionals come through on Saturday before the election to pick up all their supplies,” said Jacquelyn Callanen, the elections administrator for Bexar County, where San Antonio is located. But, she said, after the county’s coronavirus cases skyrocketed that weekend, “we had three poll sites bring their supplies back to us on Monday and say, ‘You know, over the weekend, we were talking with our family, we were sitting around the table, and they begged me not to work.'” Those polling places didn’t open on Election Day.

Of all the problems that threaten to upend the November presidential election—from intentional voter suppression to governmental dysfunction—here is one that ordinary citizens can actually help remedy: the country’s chronic shortage of election workers. This year, that shortage has been made worse by the fact that the people who typically work the polls—retirees over the age of 60—are also the most at risk for severe illness due to the coronavirus. Now, with many long-time election workers opting to stay home on November 3 out of concern for their health, officials across the country are scrambling to recruit younger people to take their place.

Poll worker requirements vary by state, but most are paid their state’s minimum wage and work the entire time the polls are open, often a roughly 15-hour day. They set up polling places, distribute ballots, help voters fill out those ballots, monitor the voting equipment, and, in some states, register voters. When a county doesn’t have enough people to work the polls, it may shutter polling places, inconveniencing voters and leading to longer lines elsewhere. Although Bexar County closed 12 polling places in July—included the three it was forced to shut down at the last minute—its primary runoff went relatively smoothly. In other states, like Georgia—where hours-long lines to vote on primary day were due in part to a lack of election workers—the shortage could be catastrophic.

Even as early voting and mail-in voting in some states ease the strain on Election Day poll workers, in-person voting remains a key cog in the system. Many states have declined to expand mail voting, and even in states that have expanded it, it may not be the best option for everyone. Among those who will rely on safe polling places in November are people who don’t receive reliable mail service, are physically or visually impaired, or require language assistance to fill out their ballot, says Myrna Pérez, director of the Voting Rights and Elections Program at the Brennan Center for Justice. Plus, Pérez says, for many people, especially those who have experienced voter discrimination in the past, casting a ballot in person at the polls is “an act of love and resilience and civic pride, and a demonstration of equality and a modeling of rights” that voting by mail can’t approximate.

In the past, efforts to recruit younger, working-age people to man the polls have fallen short. Callanen says she has had an extraordinarily hard time doing so in Bexar County. The average age for poll workers there is 72 years old. “That’s the generation that considers working the polls a civic duty, civic pride,” she says. “I’ve been here for a number of years, and you don’t see that same commitment from some of the younger generation.”

Her elections department has even tried appealing to fraternities and sororities of nearby colleges on the grounds that the paychecks from working the polls could help pad their budgets for the school year. But the occasional students who did volunteer usually failed to show up on Election Day.

The problem, of course, isn’t that younger people are lazy and unpatriotic—they’re more likely just busy. Because Election Day is not a national holiday, most people’s school and work carry on as usual, preventing them from working the polls even if they wanted to. Add child care responsibilities to the list, and it’s easy to see why retirees whose children are grown are more likely to have 15 hours to spare.

“Being a poll worker is a little bit harder than, say, signing a petition, or even calling your representative,” says Scott Duncombe, who founded an organization that sends pizza to people waiting in long lines to vote and who now works with a coalition to recruit low-risk poll workers. “In some cases, you’re signing yourself up for multiple days of training and then being there for a long shift…It’s a pretty big ask.”

Pérez says that a lot of young people simply don’t know how to sign up, or don’t recognize it for the public service it is. And the poor layouts of many jurisdictions’ websites don’t do any favors for recruitment, says Robert Brandon, president and CEO of Fair Elections Center, a nonprofit voting rights organization. “Often when you went to a typical city or county website to look around to see about being a poll worker, it’s just a lot of gobbledygook,” Brandon says, “and people just don’t apply.”

To make it easier for people to access information about working the polls, Brandon and the Fair Elections Center launched WorkElections.com, a searchable database that lists eligibility and training requirements, shift lengths, and total compensation for Election Day workers. The “Apply Now!” button at the top of each information page sends users to the jurisdiction’s more detailed application form.

In hopes of getting people to actually visit the website, the Fair Elections Center allied with other nonprofits and corporate sponsors to launch digital ads aimed at young people, as part of an initiative called Power the Polls. In addition to helping provide protective equipment for poll workers, Power the Polls is trying to convince businesses to give employees Election Day off to allow them not just to vote, but to work the polls. “The whole purpose behind our project to begin with was to try to diversify the pool of poll workers so they reflected the voters they were helping,” Brandon says. “Younger, tech savvy, bilingual people, people of color representing the communities of color that are voting in those precincts.”

Bianca Martinez, a 20-year-old Bexar County resident, worked the primary runoff election after learning about the opportunity through her work with Move Texas, a grassroots community organizing group that has partnered with Power the Polls. Martinez attended an optional training session about a week before the election, and on the day of the runoff, she helped people navigate the state’s new electronic voting system. “I know that there is going to be a lot of people that are going to not show up to the polling sites because of the health crisis that is happening right now,” she said. “I’m young, and I have the time to give, and I wanted to be there, because I genuinely care if my community votes. I care if people have access to voting centers.”

It’s too early to evaluate the success of Power the Polls’ recruitment efforts, but Brandon says a pilot program during the 2018 midterm elections showed promising results. In Cuyahoga County, Ohio—home to Cleveland—13 percent of poll workers said they learned about the opportunity through WorkElections.com. Since it takes nearly a million poll workers nationwide to run an election, Duncombe has set an ambitious goal of recruiting a quarter million people.

The CARES Act—the coronavirus relief bill signed into law on March 27—included emergency funding to help states administer their elections, but that money is running out. House Democrats want to disburse $3.6 billion in election assistance to states as part of a new coronavirus package, but Senate Republicans have shown little interest. With congressional negotiations faltering, the administration of a smooth election may rely on the efforts of grassroots organizations getting people to volunteer. “My hope is that your article inspires everyone, especially those who are in lower risk categories, to sign up to be a poll worker,” Pérez says. “What greater contribution could you make to this country than to make sure that our elections are free, fair, and accessible?”

But even with younger workers, safety will be vital. “While younger people may not be as likely to have a deadly diagnosis compared to people with preexisting conditions or chronic diseases, they can just as easily get infected and transmit infection to others,” says Brandon Brown, an epidemiologist and associate professor at UC Riverside.

There are steps jurisdictions can take to limit the spread of the virus at polling places, from disinfecting voting equipment to placing plexiglass shields around registration desks and voting stations, per the CDC’s recommendations. On primary day in Bexar County, election workers were decked out in face masks, face shields, and gloves and were provided hand sanitizer.

But Abbott refused to require masks at Texas voting locations, arguing that doing so would be a form of discrimination. (Some states with Democratic governors, such as Illinois and Michigan, have been similarly lax on masks at polling places.) The lack of a mask mandate scared some election workers away from the primaries, according to the Texas Tribune. “We’re very disappointed that it wasn’t mandated,” Callanen says. “I literally wish that there would be a change of heart from the governor.”