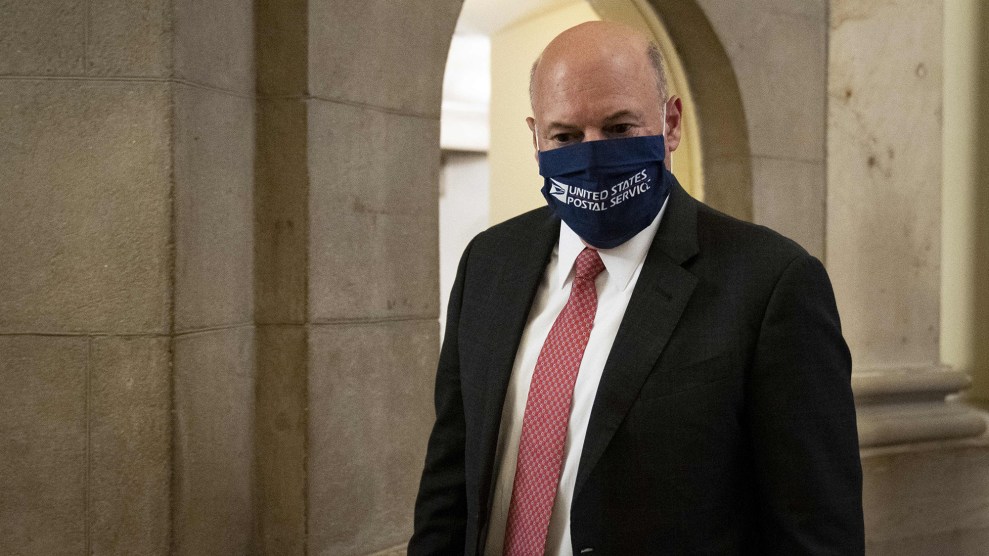 Louis DeJoy, the embattled US postmaster general, defended his policy changes in recent weeks, telling the Senate Homeland Security Committee that his efforts to make the Postal Service more efficient are part of a plan to deal with the agency’s legacy of budget shortfalls.

DeJoy acknowledged that by “transportation changes”—including dispatching mail trucks without all the day’s mail to keep delivery chains running on time—have led to delayed mail. Those delays, as noted by Sen. Gary Peters (D-Mich.) and other members of the committee, have slowed everything from medications to paychecks. DeJoy claimed that postal worker availability—severely limited in some areas due to the pandemic—was behind a lot of the delays, even as data suggests the biggest declines have come after DeJoy took the reins, already months into the pandemic.

DeJoy denied his changes have anything to do with a deliberate effort to hobble the postal service ahead of the election.

But he was generally blunt in defending his moves. When Peters asked about organizational changes he’s made to postal service leadership, DeJoy said the changes had no impact on mail delivery. He insisted sorting machines removed from facilities nationwide were “not needed,” and that he has no plans of putting them back. He vehemently denied that changes such as the removal of those machines or the timing of mail trucks’ movements have anything to do with a deliberate effort to hobble the postal service ahead of the fall election where, as a result of the pandemic, record numbers of voters will rely on the postal service to both receive and submit mail ballots.

His assertions stand in stark contrast to concerns and observations from postal workers around the country who say that while the postal service has had its issues for years, the recent changes instituted by DeJoy have had quick and severe consequences. Some postal workers have concluded the changes amount to a deliberate effort to suppress mail voting. While the idea has been derided as a conspiracy theory by Republicans, the president has been open in both questioning the ability of the postal service to handle election mail and in his opposition to providing it funding specifically because he opposes mail voting.

“They need that money in order to make the post office work, so it can take all of these millions and millions of ballots,” he said on August 13 to Fox Business News’ Maria Bartiromo, as he explained that funding for mail voting was one of the key sticking points in the latest stalled COVID-19 relief funding negotiations. “If we won’t make a deal, that means they don’t get the money. That means they can’t have universal mail-in voting. They just can’t have it.”

More than a dozen states filed a lawsuit against Trump administration earlier this week arguing that DeJoy’s actions would harm mail voting. Another half-dozen filed a separate lawsuit Friday morning arguing much the same thing. Peters launched an investigation into mail delays in early July, and says he’s already heard from 7,500 Michigan residents. Legislation has been introduced in both the House and Senate that would halt operational changes at the postal service, and the postal service’s inspector general’s office confirmed that it was reviewing DeJoy’s actions.

DeJoy’s testimony Friday came a day after David Williams, the former vice chair of the US Postal Service Board of Governors, told a separate congressional committee that US Treasury Secretary Steven Mnuchin had pushed the postal service to make operational changes in exchange for agency-sustaining funding. Williams said he resigned his position recently “when it became clear to me that the administration was politicizing the Postal Service with the Treasury Secretary as the lead figure for the White House in that effort.” His resignation came after the hiring process that landed on DeJoy and DeJoy’s interviews with the board, which Williams characterized as a disaster. Williams says DeJoy was the only candidate who appeared to be unqualified, according to the New York Times.

Mnuchin has denied that he or Trump did anything improper either in the selection of DeJoy or in pushing for the policy changes.

Williams said that part of the White House’s effort had to do with Trump’s desire to squeeze Jeff Bezos, the owner of Amazon and of the Washington Post, and that Mnuchin was “keenly interested” in labor agreements, postage pricing, and volume discounts given to Amazon, UPS, and FedEx. “The Postal service replied to early demands from the Secretary explaining that his demands were illegal, but the concerns were ignored.”

Tammy Patrick, an election administration expert and senior adviser for the Elections Program at the Democracy Fund, testified alongside Williams on Friday, saying she was troubled by recent developments. She noted that DeJoy has claimed that he has not cut overtime—a claim he repeated while testifying Friday—but cited internal memos and claims from workers that suggest that supervisors are indeed limiting and blocking overtime.

“The tone I am hearing from this postmaster general is a new one,” she said, “it is accusatory and combative where previously it was collaborative and instructive.”

Some Republicans on the Senate committee noted that they, too, had heard from constituents about mail delays, and expressed concerns. But most asked questions or made statements that were helpful to DeJoy. Sen. Mike Enzi (R-Wyo.) used part of his time brag about the “really efficient carriers” in rural areas, contrasting them with the type of service he says he receives in Washington, D.C., where he claimed mail workers are inefficient and “eat in front of customers.” DeJoy did not defend his workers or otherwise push back on Enzi’s characterization. Sen. Rand Paul (R-Ky.) suggested that the postal service has too many employees and that it should reduce mail delivery, especially in hard-to-reach rural areas, a suggestion even DeJoy thought went too far.

Committee chair Ron Johnson (R-Wisc.) ended the hearing by telling DeJoy he supports his efforts at the postal service, while acknowledging that “there have been some unusual delays.” But, Johnson said of the complaints his office had received, “the vast majority seem very highly scripted, like this could be a very well organized effort, which doesn’t surprise me in the slightest.”

“I have no doubt the Democrats are ginning these issues and these problems up into something that it’s not,” he said. “A very false narrative designed to extract a political advantage.”

Peters, the committee’s highest ranking Democrat, directly pushed back. “These are real concerns that I’m hearing,” he said. “These are not manufactured.”