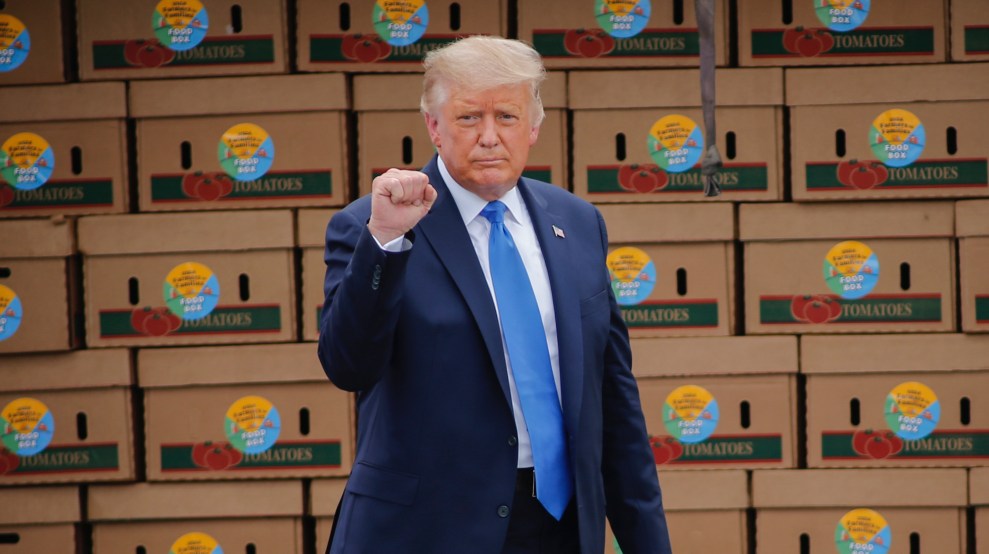 New York’s attorney general, Letitia James, revealed in a court filing on Monday that her office is probing the Trump Organization for fraud and tax evasion. And among the matters her office appears to be scrutinizing is a mysterious debt that has long appeared on his balance sheet: a $50 million loan connected to Trump’s Chicago hotel and tower project that Trump claims to owe himself. In the past, Trump has suggested that this debt represents a loan he repurchased from a lender, but Mother Jones reported last year that the loan may not exist and may be evidence of tax fraud.

James’ investigation has not previously been made public, but according to the 68-page filing by her office, New York state prosecutors have been negotiating with the Trump Organization for months to turn over documents and make executives available to be interviewed—and the company has largely complied. However, James’ office now contends, the Trump Organization abruptly halted its cooperation last month: It is refusing to turn over some subpoenaed documents, and Eric Trump canceled an interview he’d previously agreed to. James is asking a New York judge to enforce seven subpoenas against the Trump Organization.

James’ office is investigating the president’s company over a range of financial matters, including the possibility that, before taking office, Trump may have misled lenders by overvaluing his properties when seeking loans or other financial services. This matters because banks typically assess the value of applicants’ assets to determine if they’re a good credit risk. James launched the investigation last year after the president’s former lawyer Michael Cohen testified before Congress that Trump had inflated the value of his properties and provided copies of Trump Organization financial statements that he said had been submitted to lenders. The filing mentions three properties that Trump may have overvalued: his Seven Springs estate in Westchester County; 40 Wall Street; and his Los Angeles golf club.

James is also looking into other potential financial chicanery by Trump, including the financing of his Chicago hotel and tower. A loan connected to that project is one of the murkiest areas of Trump’s finances. Last year, Mother Jones reported:

Here’s what is publicly known about this mystery debt: On the personal financial disclosure forms that Trump must file each year as president, he has divulged that he owes “over $50 million” to a company called Chicago Unit Acquisition LLC. The forms note that this entity is fully owned by Trump. In other words, Trump owes a large chunk of money to a company he controls.

The disclosures state that this loan is connected to Trump’s hotel and tower in Chicago, and the forms reveal puzzling details about Chicago Unit Acquisition: It earns no revenue—suggesting that Trump was not paying interest or principal on the loan—and Trump assigns virtually no value to Chicago Unit Acquisition. Something doesn’t add up. Under basic accounting principles, a firm that is owed money and has no outstanding debt should be worth at least as much as it is owed. The loan has another odd feature: It is identified as a “springing” loan, a type of loan made to borrowers who are viewed as credit risks. Known sometimes as “bad boy” loans, these agreements allow the lender to impose harsh repayment terms if certain criteria aren’t met. These are not the type of loan terms that someone is likely to impose on himself.

The Trump Organization has consistently refused to answer questions about Chicago Unit Acquisition, a limited liability company it formed in Delaware in 2005, as construction began on the Trump International Hotel and Tower in downtown Chicago. But Trump did tell the New York Times in a 2016 interview that this debt represents a loan he repurchased from a group of lenders. “We don’t assess any value to it because we don’t care,” Trump said. “I have the mortgage. That is all there is. Very simple. I am the bank.” Jason Greenblatt, who was then the Trump Organization’s top lawyer, declined to explain to the Times the reason for the Chicago Unit Acquisition deal. “It’s really personal corporate trade secrets, if you will,” he said. “Neither newsworthy or frankly anybody’s business.”

When Trump began work on his Chicago tower, he obtained two loans—one from Deutsche Bank, worth $640 million, and a second smaller “mezzanine” loan for roughly $120 million from private equity firm Fortress Investment Group. Work on the project was wrapping up in 2008 when the economy entered a tailspin, and when Trump struggled to repay the Deutsche Bank debt, he launched a long and nasty legal battle with the German Bank. He eventually did pay this loan off by refinancing through the Deutsche’s private banking division (which caters to high-net-worth individuals). But very little was said publicly about what happened to the Fortress loan. As we reported:

In March 2012, as Trump resolved his dispute with Deutsche Bank, he finalized a separate deal with Fortress and its partners to clear his debt with them. According to a source with direct knowledge of the deal who spoke to Mother Jones, Fortress ultimately agreed to accept 50 cents on the dollar—or about $48 million—for the outstanding debt (which by that time amounted to just under $100 million). This was a steep loss for the hedge fund and its partners. The question is whether the deal was what’s known as a “discounted payoff”—in which the debt was considered repaid and the loan was canceled by the lender—or whether Trump purchased what remained of the loan. That distinction has enormous implications.

When a lender forgives a portion of a loan, the IRS considers the unpaid portion taxable income. For instance, if a lender accepts $50 million in repayment of a $100 million debt, the borrower, in the eyes of federal tax authorities, has earned $50 million and owes tax on that. The tax could be as high as 39 percent. But big-time borrowers have devised a tactic to forestall paying taxes in cases in which they’re able to buy back their debt at a discount. They purchase the debt through a corporation, parking the loan within this entity to temporarily avoid realizing income. Debt parking falls into a legal gray area. “Maybe there are respectable ways that it could work, but I would call it kind of a scam to pretend you haven’t gotten rid of the debt,” says Daniel Shaviro, a professor of tax law at New York University.

So the distinction between whether Trump purchased his loan from Fortress or whether Fortress forgave the debt matters significantly. James’ filing confirms Mother Jones‘ reporting that the Fortress loan was forgiven, and notes that “the debt may have been a taxable event to the borrower.”

“Weisselberg did not, however, have personal knowledge and the Trump Organization subsequently refused to produce documents to confirm these basic facts,” James’ filing contends.

Alan Garten, chief counsel for the Trump Organization, denied any wrongdoing by the company in a statement to Mother Jones: “The NYAG’s continued harassment of the company as we approach the election (and filing of this motion on the first day of the Republican National Convention) once again confirms that this investigation is part of a politically motivated vendetta.”