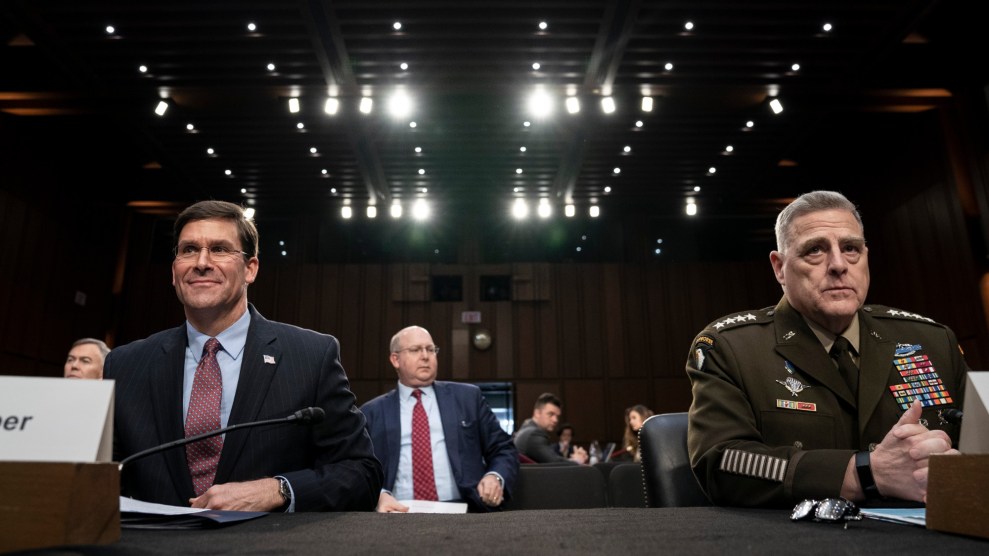 Gen. Mark Milley, the highest-ranking US military officer, vowed Thursday to “take action” if reports of Russian bounty payments targeting US troops in Afghanistan are confirmed. Still, don’t expect much in the way of immediate action, as the chair of the Joint Chiefs of Staff tried to downplay the veracity of the public reports on the subject.

Milley, addressing members of the House Armed Services Committee alongside Defense Secretary Mark Esper, called the widely-publicized reports of bounties “a unique, discrete piece of information that hasn’t been corroborated.”

“If in fact there are bounties directed by the government of Russia or their institutions to kill American soldiers, that’s a big deal,” Milley said. “We don’t have that level of fidelity yet. We’re still looking.”

Esper denied seeing any intelligence specifically about a “bounty,” but said the briefings he’d been given about Russian “payments” were unconfirmed. He also said the intelligence originated from outside the Pentagon and that Defense intelligence agents were “unable to corroborate this report.”

The payments were one of several subjects lawmakers were eager to discuss with Milley and Esper, who were called in the first place to discuss the military’s role in responding to civil unrest following George Floyd’s death. Both men came under intense scrutiny following the forceful removal of peaceful protesters from a park outside the White House last month. Milley and Esper accompanied President Trump on a walk after Park Police hit protesters with tear gas and, initially gave laughable explanations for their presence at Trump’s side. More than a month after the incident, neither of them could say who gave the order to clear the park. “It’s still unclear to me,” Esper said. “I don’t know,” Milley added.

In one of the stranger moments of the hearing, Milley said he was “not aware” of a highly-publicized event where two Australian journalists were attacked by police in DC on live TV, but said, “I am deeply committed to a free press. I’ll die for the Constitution.” (Perhaps not noting the irony, Esper also announced an aggressive crackdown on leaks within the Pentagon.)

In his prepared remarks, Esper gave a point-by-point breakdown of which National Guard forces were used in Washington, DC to quell protests, but did not reflect on his own controversial decisions during that time, which included a series of contradicting orders to have active-duty troops deployed near the city. He did acknowledge, as he has in the past, that “using active duty forces in a direct civilian law enforcement role should remain a last resort, and exercised only in the most urgent and dire of situations.”

Milley and Esper were less direct about work being done to prevent systemic racism in the military. Esper announced at the hearing the creation of an internal diversity and inclusion board to provide recommendation by year’s end on ways to “increase racial diversity and ensure equal opportunity across all ranks, especially in the officer corps,” while Milley noted that the military integrated nearly two decades before the passage of the Civil Rights Act.

Left unsaid was any mention of repeated surveys that show rising levels of racism and racist symbols within the military. Last year, 53.5 percent of minority service members surveyed by Military Times said they had “personally witnessed” examples of white nationalism or racism within the military, a 12 percent increase from three years ago.

On the topic of military bases named after Confederate generals, Milley seemed inclined to change them, without saying so explicitly. He even admitted that a Black service member had confided to him the difficulty of serving at Fort Bragg, a base named after a general who enslaved that soldier’s ancestors. “Some think it’s heritage, some think it’s hate,” Milley said.