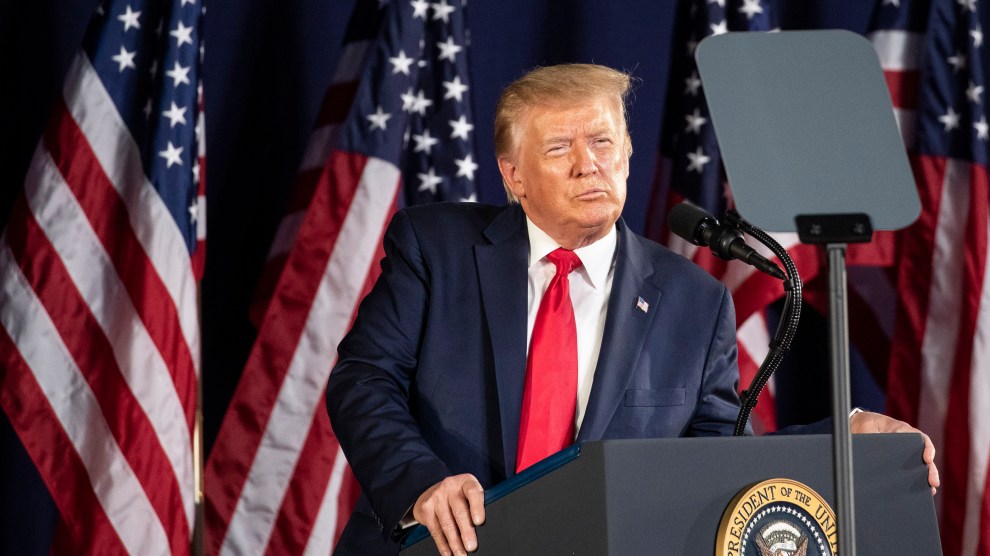 On Friday night, the eve of July 4th, President Trump used another one of his incendiary campaign rallies to stoke the flames of a culture war. In his remarks at the foot of Mount Rushmore, Trump bashed a so-called “left-wing cultural revolution” and “new far-left fascism” while delivering lines that would have been virtually indistinguishable from a script for Tucker Carlson’s Fox News show.

Here’s are some the most absurd, explosive, and outrageous things he said during the speech:

There is a “new far-left fascism” in “corporate boardrooms.”

Trump claimed, “In our schools, newsrooms, even our corporate boardrooms, there is a new far-left fascism that demands absolute allegiance. If you do not speak its language performed rituals recite its mantras and follow its commandments, then you will be censored, banished, blacklisted, persecuted, and punished.”

Corporate America, of course, has relentlessly pursued tax cuts and backed Republicans to get them.

He wants 10-year prison minimums for anyone who defaces statues.

Trump said that under an executive order he signed, people who “damage or deface” statues will receive “a minimum of 10 years in prison.” This seems to be a misinterpretation of his own order, which didn’t create new penalties but instead directed the attorney general to prioritize prosecuting cases of vandalism using pre-existing laws that allow for up to 10 years of punishment for damaging federal property. Regardless of the accuracy of Trump’s claim, its fear-mongering seems aimed at chilling civil disobedience by threatening protesters.

Numerous presidents have led ruthless and abhorrent travesties of justice against oppressed groups: extrajudicial drone strike killings, the institution of slavery, Jim Crow. But Andrew Jackson is one of the only ones to have carried out an explicit campaign of ethnic cleansing. He literally signed a bill into law called the Indian Removal Act. Jackson was the linchpin in the Trail of Tears, in which 60,000 Native Americans were forced out of their homes.

Other presidents have hidden behind the “realities of governing” and other such phrases that obfuscate their moral culpability in the country’s most tragic antagonisms. Jackson wasn’t one of them. He called for the removal of Native Americans for 10 years prior to taking office. Historians have written that it was his top priority going into office.

During his speech, Trump called Jackson “great” as he proudly announced that police had arrested the “suspected ringleader” of protestors who tried to tear a D.C. statue of the ethnic cleansing president down.

He stoked the culture war by railing against a “left-wing cultural revolution.”

“Angry mobs are trying to tear down statues of our founders, deface our most sacred memorials, and unleash a wave of violent crime in our cities,” Trump said. “They think the American people are weak and soft and submissive. Make no mistake, this left-wing cultural revolution is designed to overthrow the American revolution.”

While Trump didn’t address it directly, his rhetoric is playing into a growing—and misplaced—fear of outside Antifa agitators coming into suburbs and wreaking havoc. This hasn’t happened, but people across the county have been overwhelming police departments with complaints stemming from baseless fears of the group.

He didn’t even mention the coronavirus.

Trump didn’t mention the disease once, even to deride it, even as the US death toll has surpassed 130,000. Instead, he spoke once again to a tightly packed, mostly maskless crowd. On Thursday, he praised his administration’s response to the virus, despite the fact that the United States the worst outbreak in the world, and described the new surge in cases as “temporary hot spots,” in line with his continued rhetoric of downplaying the deadly pandemic.