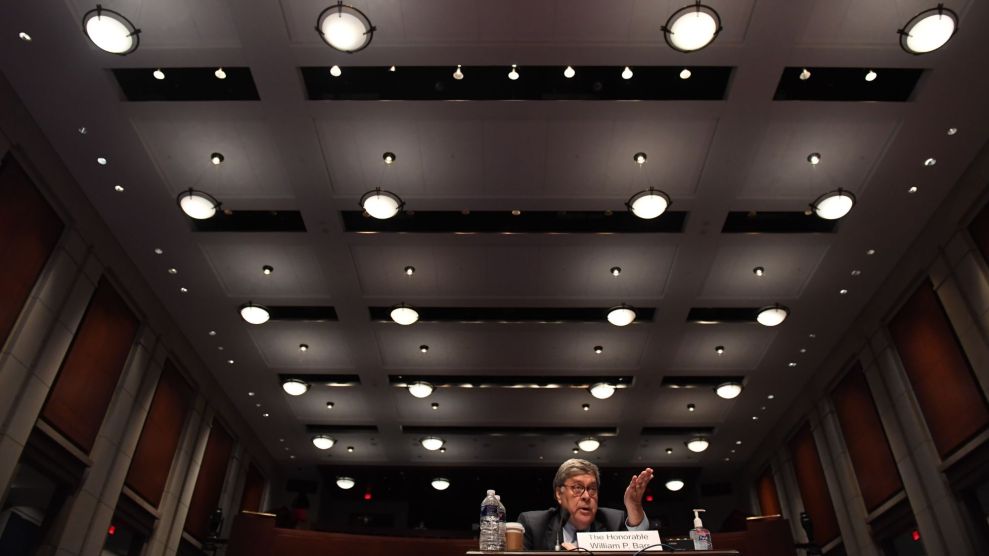 When Attorney General Bill Barr appeared before the House Judiciary Committee on Tuesday, there were plenty of contentious exchanges. The nation’s top law enforcement official defended both his unusual intervention in criminal cases involving Donald Trump’s pals and the Trump administration’s violent response to protesters in Portland and Washington, DC. But there was a troubling moment that did not generate headlines and that underscored a disturbing point: Barr is helping Vladimir Putin’s effort to subvert American democracy.

Barr has disincentivized the entire FBI from probing any possible repeat of 2016.

About two hours into the hearing, Rep. Cedric Richmond (R-La.) asked Barr, “Is Russia attempting to interfere in the 2020 presidential election?” In a low-key manner, Barr replied, “I think we have to assume that they are.” He said nothing else. He did not note Russia was a threat to the election. He did not say it was a Trump administration priority to prevent another Kremlin attack on a US election. And Barr did not affirm what other Trump officials have publicly testified: Russia is intervening in the election.

In May, when Director of National Intelligence John Ratcliffe testified during his Senate confirmation hearing, he noted several times that the intelligence community already had evidence that Russia was intervening in the 2020 election. In February, FBI director Christopher Wray testified before the House Judiciary Committee that Russia was again engaged in clandestine “information warfare” similar to what it mounted during the 2016 election. Neither Ratcliffe nor Wray in their public testimony detailed Moscow’s actions. But shortly after Wray’s appearance, intelligence officials privately told members of Congress that Putin was interfering in the 2020 contest to once more assist Trump. (Trump, of course, denied Russia was taking secret steps to help him.)

Barr referenced none of these warnings. He he did not cite intelligence that apparently indicates Russia is currently running covert ops to help Trump. He provided as minimalist a response as he could to Richmond’s query: We should assume Russia is doing something. He low-balled the matter, presumably to help Trump, who for years has denied or dismissed the fact that Russia successfully intervened in the 2016 election to boost his chances. In doing so, Barr also assisted Putin’s operation by not drawing attention to it. Imagine if Barr had declared, We have evidence that Russia is now interfering in the 2020 election, and we will not stand for it. That would have been a story and raised the question: What is the Trump administration doing on this front? Instead, Barr brushed aside this crucial matter.

And there’s more. In his opening statement, Barr denounced the Russiagate scandal as “bogus.” When Barr does this, he is referring to the FBI’s investigation of contacts between the Trump campaign and Russia in 2016 during the Kremlin’s assault on the election. Barr is wrong to suggest there was no cause for the FBI to be concerned about these interactions. (These interactions included: Trump’s campaign manager, Paul Manafort, privately communicating during the election with a Russian oligarch close to Putin and with a former business associate suspected by the FBI of being a Russian intelligence asset. Manafort, Jared Kushner, and Donald Trump Jr. secretly meeting with a Kremlin agent as part of what they were told was a covert Moscow effort to help the Trump campaign. Campaign aide George Papadopoulos being privately informed that Russia had “dirt” on Hillary Clinton and subsequently attempting to develop a back-channel between the Trump campaign and Putin’s office. And Roger Stone, at Trump’s behest, privately trying to obtain inside information from WikiLeaks, while that website was dumping Democratic material stolen by Russian hackers.) But more importantly, whenever Barr dismisses the investigation of Trump-Russia contacts, he conveys the impression that Trump is correct to call the whole affair a “hoax.” That is, Barr bolsters the false Trumpian notion that nothing significant happened in 2016 with Russia—not with the campaign’s Russian contacts, not with Putin’s intervention in the election.

Barr assists Putin in yet another way. Since becoming attorney general, Barr has been running a crusade against the FBI’s Trump-Russia investigation. He claims this probe was a grave abuse of law enforcement power and, in this regard, supports Trump’s conspiracy theory that the Obama administration in 2016 cooked up a phony scandal in order to spy on Trump. This is what Trump and his Fox cult supporters call “Spygate” or “Obamagate.“ Barr has assigned several US attorneys to investigate different aspects of the Russia investigation (which did have a problem in one area—the surveillance warrant for former Trump campaign adviser Carter Page—but which an inspector general concluded was not the product of any political bias). As Barr has launched these investigations, he has also intervened to help Trump cronies who were targets of the FBI’s Russia probe (which eventually became special counsel Robert Mueller’s investigation). Barr ordered the erasure of the case against Michael Flynn, Trump’s onetime national security adviser who pleaded guilty to lying to federal investigators, and directed the Justice Department to reduce the sentence it sought for Roger Stone, who was found guilty of lying to Congress.

Consider the implications of all of this for any FBI agent or federal investigator who now wants to look into clandestine Russian efforts to assist Trump in the 2020 election. You would have to be crazy to seek or take on such an assignment. Trump and his supporters have shown that they will decry any such investigation as a “hoax” and target the investigators as Deep State plotters who ought to be publicly denounced and punished. Barr has signaled he is willing to sic his own investigators on anyone within the FBI or Justice Department who dares dig into Russian intervention in a US election. The message to an FBI agent who might want to pursue such a matter is clear: This is career suicide. Barr has disincentivized the entire FBI from probing any possible repeat of 2016. This is great news for Putin and his operatives.

It’s often been said that Vladimir Lenin coined the term “useful idiot” to describe someone who unintentionally helps his foe’s cause. (Lenin likely never used this phrase.) Barr is no idiot. He knows what he is doing: diminishing the Russian attacks (then and now) designed to help Trump; impeding the FBI from investigating Russian interference; and reinforcing Trump’s phony “Spygate” narrative. He goes about all of this in a sly, calculating, and clever manner. There’s nothing dumb about his campaign to undo the real Russian taint on Trump’s presidency. That is why Barr is useful for Putin—and dangerous for free and fair elections in the United States.