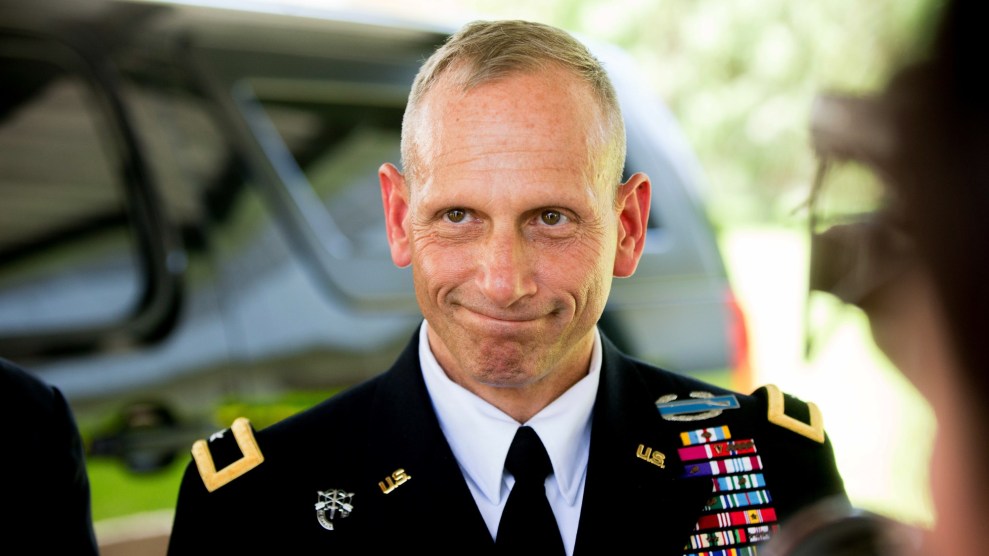 Brig. General Don Bolduc outside the US embassy in Chad in 2016.Andrew Harnik/AP

Khalifa Haftar, a warlord who is attempting to overthrow Libya’s internationally recognized government, is short on friends in the United States. Haftar has cozied up to Russia and other autocratic regimes. He and his forces have been accused of a slew of war crimes, including indiscriminately bombing civilians and torturing opponents. And he is losing, pushed into retreat by a ragtag group of militias with Turkish support.

But Haftar, who has generally denied the war crimes allegations, does enjoy support from an unexpected place. In New Hampshire, Don Bolduc, a retired brigadier general, is running for Senate on a platform that includes calling for the United States to aggressively back Haftar’s bid to seize power in Libya.

“All Haftar wanted was to be the supreme commander, so give it to him.”

Bolduc’s military background is impressive. It includes 10 tours in Afghanistan, two awards for valor, five Bronze Stars, two Purple Hearts and experience on horseback.* Bolduc, who is competing for the GOP nod to take on Democratic Sen. Jeanne Shaheen in November, has a blunt pitch: “If you want a true American badass who won’t back down, Don Bolduc is ready to ride.” Citing his own struggle with post-traumatic stress disorder, Bolduc has also become a prominent advocate for soldiers seeking mental health treatment.

After serving in Afghanistan, Bolduc headed the military’s Special Operations Command Africa from 2015 to 2017. And he says that this stint, during which he combated terrorist-linked militias in Libya, informs his foreign policy views. Bolduc oversaw troops who worked directly with Haftar during this period. He’s said that he found the Libyan warlord to be “a very reliable guy” who wanted “to take it to ISIS and al-Qaida and hand them their ass.”

“We should have always supported Haftar,” Bolduc—a rare Senate candidate who obligingly fields cold calls from reporters—told me recently.

Haftar is a former officer in Moammar Qaddafi’s military who spent 20 years in the United States, during which time he established a relationship with the CIA. He returned to Libya in 2011 after Qaddafi’s overthrow. By 2016, Haftar had acquired control of most of the eastern part of country and boasted some success against militias claiming allegiance to terror groups. Bolduc commanded a small special forces team that worked with Haftar to gather counterterrorism intelligence and plan attacks on militants. But Bolduc says the Obama administration ordered him to stop working with Haftar’s militia in mid-2016.

Obama wanted to avoid entanglement in Libya. And Bolduc says administration officials were concerned by Haftar’s autocratic ambitions. The warlord refused to work with the Tripoli-based Government of National Accord, which enjoys UN recognition and official US support.

But Bolduc remains miffed. “All Haftar wanted was to be the supreme commander [of Libyan military forces], so give it to him,” Bolduc said. “That’s his only ask, so help him out. Let him be the military leader. Let him set up a government. Who cares if he gets out in five years or so and wants to be prime minister or president? So what? What’s wrong with that? We had it in our country. We had Eisenhower.”

Even under President Donald Trump, the bulk of the US foreign policy establishment has steered clear of Haftar. But Bolduc isn’t his only booster. Haftar has backing from autocratic leaders in Egypt, the United Arab Emirates, and Russia. Last April, Trump and his then-national security adviser John Bolton—along with other hawkish Americans—encouraged a surprise offensive Haftar launched in a bid to quickly seize control of the country.

But this offensive has been both brutal and unsuccessful, and Haftar’s stock as a viable ally as fallen as he has cozied up to shady regimes. He has accepted Russian arms and relies on as many as 1,200 Russian mercenaries from the infamous Wagner Group, a confidential UN report has found, according to Reuters. A State Department official last month said the United States is looking into a visit by Haftar to Venezuela that drew suspicion that he might be attempting to negotiate an oil deal in violation of US and UN sanctions.

Haftar’s claims to military competence, meanwhile, have suffered badly. Last year he reportedly told backers he could swiftly seize Tripoli and gain control of the country. Instead, his offensive stalled. In recent months, his forces have been pushed back by militias loyal to the Government of National Accord, which has relied on support from Turkey. This undermines Haftar’s main pitch to backers: his supposed ability to stabilize a country that has been divided among warring militias since the US-led overthrow of Qaddafi nearly a decade ago.

“He got all this support and he still couldn’t win,” said Thomas Hill, a senior program officer focused on North Africa at the US Institute of Peace. “He couldn’t take over a  capital that barely had functioning electricity. Really, I am not sure the guy could fight his way out of a paper bag.”

Bolduc, however, says he hasn’t changed his mind. He argues that Haftar’s military setbacks result from America’s failure to help him and to more forcefully keep Turkey out of the conflict. “He’s on his heels because we let him get on his heels,” Bolduc told me. And he claims Haftar’s ties to Russia could have been averted if he’d received more US support. “After we pulled our advisers out of there, he had to go to Russia for help,” Bolduc said.

Describing his own experience working with Haftar, Bolduc said that the warlord “didn’t abuse people” or “commit military crimes.” But since Haftar’s Libyan National Army launched its offensive last April, it has been been accused of a host of such acts. In May 2019, a bipartisan group of US members of Congress asked the Justice Department to investigate “Haftar and his subordinates” over allegations of war crimes. Two lawsuits filed in federal court accuse Haftar of overseeing the indiscriminate bombings and extrajudicial murders and torture of Libyan civilians. (Haftar, who has generally denied such allegations, did not respond in court. But a magistrate judge has recommended that the court dismiss the cases because it lacks jurisdiction to rule on events in Libya.) Amnesty International and the United Nations have also condemned indiscriminate attacks on residential areas of Tripoli that occurred during Haftar’s assault.

Asked about such allegations, Bolduc said, “If he did commit war crimes, that is something we can’t work with and allow him to do. He’s got to be held responsible for that.” But Bolduc said this would depend on whether the allegations can be proven.

President Donald Trump and the Republican National Committee have endorsed Bolduc’s GOP rival, attorney Corky Messner. But as he competes in a primary contest in which nearly all voters are strongly supportive of Trump, the former general is hesitant to criticize the president. While Bolduc faults the Trump administration for continuing what he calls an ineffective strategy in Libya, he says the responsibility rests outside of the Oval Office.

“I don’t blame President Trump for this,” Bolduc said. “I blame his advisers. I blame the people who should be telling him what we should be doing and who he should be supporting.”

* The description of Bolduc’s service in Afghanistan has been revised.