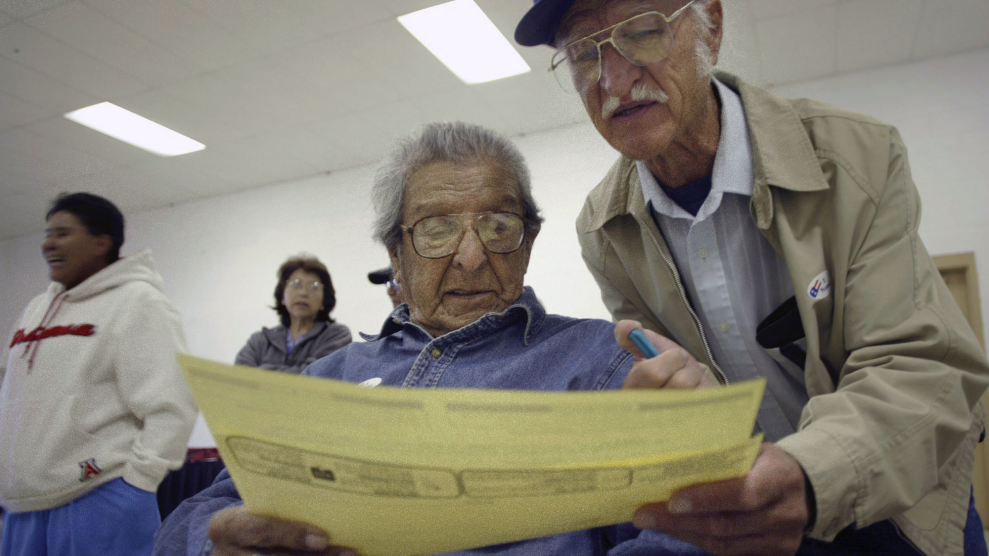 A member of the Acoma Pueblo reviews a sample ballot with the help of his nephew.Rick Scibelli/Getty

Democrats pushing to expand the role of mail-in ballots in November’s election may be neglecting a vulnerable population that’s consistently taken their side: Native American voters, 2.3 million strong and growing. While geographic isolation, cultural divides, and lack of resources have long limited their participation in the political process, this year’s pandemic presents a new hurdle, as voting by mail is significantly harder for Indigenous communities.

Since securing their voting rights over the past century, Native American voters have steadily increased their influence in local, state, and Congressional elections. Yet many, particularly those who live on reservations, still face enormous hurdles: navigating voter register without the aid of the internet or targeted outreach, then traveling obscene distances to polling places off their reservations, where they might encounter language barriers or restrictive voter ID laws. On Thursday, the Native American Rights Fund released a 100-page report detailing these and other factors that disenfranchise Native voters.

Indigenous advocates have fought for and won registration offices and polling places closer to where Natives live. Yet those efforts could be rendered moot in states turning to mail-in ballots to limit the spread of COVID-19—a great option, unless your community lacks reliable mail service.

“Vote-by-mail simply does not work in Native American communities,” says Jacqueline De León, a member of the Isleta Pueblo and an attorney who co-authored the Native American Rights Fund report. “To the extent that there can be vote-by-mail, increase it. But doing only vote-by-mail would massively disenfranchise Indian Country.”

In some states, as few as 18 percent of Native Americans receive any kind of mail at home. The lack of residential addresses on reservations has at times been exploited, such as when North Dakota passed a voter ID law to suppress the Native vote after Democrat Heidi Heitkamp won a Senate seat in 2012.

That law, which required voters to present IDs listing a residential street address, has been massively tempered thanks to NARF and other groups suing the state of North Dakota and winning a settlement that ensures Native voters can present tribal IDs or even just point to where they live on a map. Yet this month’s primary in North Dakota will be entirely vote-by-mail, which could once again silence Indigenous people, many of whom only get mail at far-flung post offices that aren’t consistently open. This only compounds the many challenges Native voters already face.

Titled “Obstacles at Every Turn,” the NARF report reflects the perspectives of more than 120 Native people from dozens of tribes who spoke at the group’s public forums. The report found “remarkably consistent” trends across Indian Country, from illiteracy and lack of education around the importance of voting, to poor quality or non-existent roads that make it hard reach polling places and post offices. Natives also face limited hours at rural government offices and overt discrimination by non-Native poll workers.

The majority of interviewees who spoke about vote-by-mail opposed it, with one tribal member in Montana even calling it a “Jim Crow law.” After a 2012 election in Montana, researchers found that only 10 to 15 percent of ballots from reservation communities came in by mail, compared to 33 percent from the rest of the state.

NARF, along with the ACLU, continues to litigate against a Montana law banning ballot collection, the practice of gathering a neighbor or family member’s ballot and transporting it to a polling place, reducing the difficulty of voting in remote communities. Arizona’s collection ban was overturned in January by a federal appeals court that ruled the law was racially motivated, violating the Voting Rights Act.

In the 2020 presidential race, razor-thin margins could tip battleground states like Nevada, Minnesota, and Arizona, which all have relatively large Indigenous populations. OJ Seamans Sr. of the Rosebud Sioux tribe, who directs a community-driven voting group called Four Directions, is eager to begin a registration drive in Arizona, where his group successfully pushed to double the number of early voting satellite offices for the Navajo Nation. (The Arizona legislature is still debating how to conduct the presidential election this fall, but for the state’s upcoming August 4 primary, at least some polling places will be open.)

Seamans, who has coupled voter registration with a push to accurately complete the 2020 Census, believes the pandemic is forcing Natives to see how federal policies directly affect their lives. They’re learning “a very harsh lesson,” he says, about “how important it is for them to participate in both the Census and voting.”

A 2015 Census Bureau report found that the American Indian/Alaska Native population had the lowest Census mail response rate of any ethnic group. Inaccurate Census data can cause public housing shortages in Native communities, and a “capricious” distribution of funding under programs like the CARES Act.

While systemic problems like limited transportation and Internet access won’t be fixed between now and November, Indigenous advocates are doing what they can to keep physical voting locations open. Says Seamans, “the trust in Indian Country of their ballots being counted, without a personal visit to the polling place…that trust doesn’t exist.”

De Leon would like to see community-run curbside polls, where people can vote from their cars to reduce COVID transmission risk. “The world is really different from what I thought it was when writing this report,” she says. “In what many say is the most consequential election in history…it seems absurd to me that there might not be polling places on reservations.”