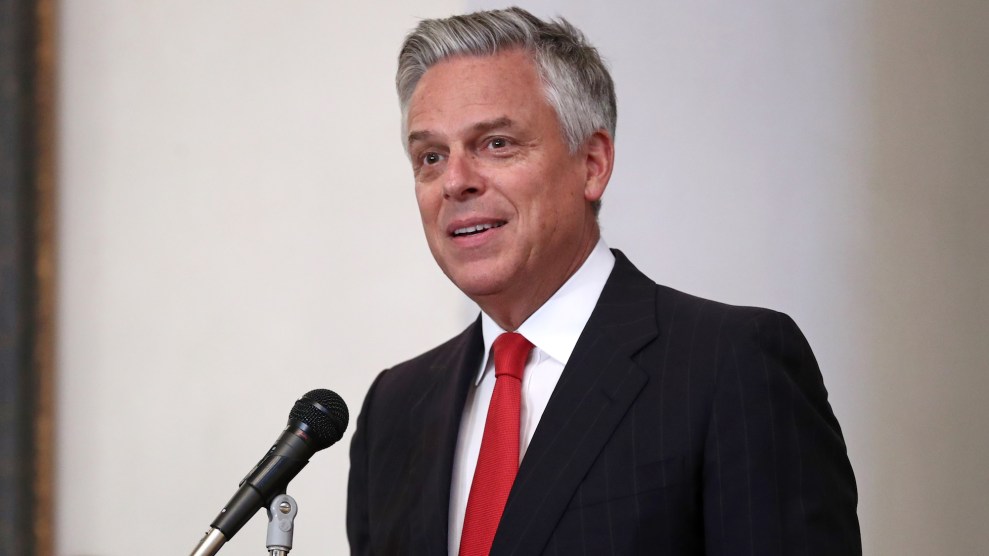 If Jon Huntsman Jr. wins the GOP primary on Tuesday to return to his old job as Utah governor, he may have a gay, Greek, ex-Mormon Democrat to thank for it.

Jim Dabakis served three years as the Utah Democratic Party chair. He was the sole openly gay member of the Utah legislature until the end of 2018, when he retired from his state Senate seat after six years and ran unsuccessfully to be mayor of Salt Lake. An art dealer, he supports marijuana legalization and is known for press-friendly stunts like proposing to add the “Stormy Daniels On-Ramp” to a state highway the GOP-run legislature wanted to name after President Trump. But last month, Dabakis did something unexpected: He registered to vote as a Republican.

The move was born of years of frustration with a state Republican establishment that has repeatedly “spit in the face of Democrats,” Dabakis told me in an interview in his backyard in Salt Lake City, while Taco, his Chihuahua, snoozed on his lap. After watching Republicans systematically gerrymander Democrats out of any meaningful role in state governance, he decided something radical was in order. “I thought of burning down the Capitol,” he said with a laugh. Instead, he marshaled his 60,000 newsletter subscribers and 33,000 Facebook followers and urged them to also switch parties and vote in Tuesday’s GOP primary for Huntsman, the most moderate candidate in the race. “What have we got to lose?” he said, throwing up his hands.

Utah is among the reddest of red states. Utah last elected a Democrat as governor in 1980, when voters tapped Scott Matheson, whose son Jim Matheson was for many years the only Democratic member of the state’s congressional delegation. In the last redistricting, Republicans ensured that liberal enclaves in Salt Lake City, Moab, and Park City were carved up and spliced into legislative districts where their Democratic votes were diluted by conservative and often rural voters. The result has been a GOP supermajority in the state legislature, where Democrats have little power. A 2018 analysis by the Salt Lake Tribune estimated that Democrats had won a third of the total votes for the state House that year but only a fifth of the seats thanks to Republican gerrymandering. Today, 59 out of 75 state House members belong to the Republican Party.*

Dabakis says the exclusion of Democrats from having any meaningful role in the government has been in stark relief recently as the novel coronavirus has swept through the state. More than 40 percent of the cases in Utah have been among Latinos, who make up just 14 percent of the population. But neither the state’s first community coronavirus task force nor its economic response task force included a single Latino member—not even Sen. Luz Escamilla (D), a Latina state legislator who had first-hand experience with the virus after she got sick with Covid-19 at the end of March. (All of Utah’s Latino state legislators are Democrats.)

As in many other places with one-party rule, most of the action in Utah electoral races happens in the primary, where the GOP winner is a shoe-in for the general election. This year will be the first time a non-incumbent candidate will win the governor’s race since Huntsman himself won back in 2004. The current governor, Gary Herbert, was Huntsman’s lieutenant governor and moved into the governor’s mansion when Huntsman left in 2009 to become Obama’s ambassador to China. Herbert announced last year that he would be retiring, and the current field to replace him has been crowded, with four candidates currently vying for the GOP nomination.

Huntsman, who ran for president in 2012 and served as Trump’s ambassador to Russia, is by far the most moderate of the bunch. The other contenders are Herbert’s heir apparent, current lieutenant governor Spencer Cox; former Utah House speaker and Trump superfan Greg Hughes; and Thomas Wright, a real estate broker and former chair of the Utah Republican Party. Democrats have nominated University of Utah professor Chris Peterson, who hasn’t got a prayer in the general election in November in a state where registered Republicans outnumber registered Democrats by about 3 to 1.* In a recent poll conducted by Utah Policy and KUTV News, Cox was leading the GOP field with 34 percent of likely GOP voters saying they’d vote for him. Huntsman was a close second with 30 percent. But with the influx of new Republicans, it’s anyone’s guess what might happen.

Before launching his campaign to get Democrats to vote in the GOP primary, Dabakis did the math and figured that in the 2016 Utah GOP primary, 245,000 people cast a ballot. In a four-person race, “ten, twenty, thirty thousand votes could make a difference,” he said. Dabakis was as surprised as anyone to learn that by the time registration closed on June 19, the Utah GOP had gained more than 100,000 new voters since the beginning of the year, 44,000 of them just in the past month. Meanwhile the number of unaffiliated voters shrank, along with the number of registered Democrats. Many of those who switched parties have left messages for Dabakis on his Facebook page indicating that while they had misgivings about joining a party they loathe, they were heeding the call. (“I admit, I felt a little dirty, but I did it,” writes one woman.) “These are people who have been completely excluded from the political process,” he said.

“These are people who have been completely excluded from the political process.”

Dabakis said when he first hatched his plan to switch parties, many of his fellow Democrats were livid. But he said that Utah Democrats suffer from Stockholm syndrome—so acclimated to being disempowered that they are grateful for any crumbs of political victories that Republicans deign to throw at them. As a result, they have virtually no successful initiatives to present to voters. Because Democrats have so little power, the GOP has gotten more radical. “If you’re a Republican, you’re only hearing from the fringe,” Dabakis says. “There’s no upside to being reasonable.”

“If the entire Utah legislative Democratic caucus went to Wendover for the session, nothing would change,” he says, referencing a Nevada gambling destination popular with Utahans. “We’ve had 40 fucking years of trying to do the same thing. It’s time to look around and do something revolutionary.”

The effort hasn’t gone unnoticed by state Republican leaders, especially Greg Hughes, a real estate developer who is the most radically conservative of the gubernatorial candidates, and the one who seems to strike the most fear in the hearts of Democrats. A former right-wing talk radio host, he supported Trump in 2016 before it was politically popular and was briefly considered for a Trump cabinet post. He spent 16 years in the state legislature, where his tenure was plagued with allegations of ethics violations and conflicts of interest because he supported state development projects that would benefit his own real estate.

Hughes helped the administration shrink the Bears Ears National Monument and has been among those in the state legislature trying to compel the federal government to turn over management of public lands to the state so they could be opened up for coal, oil and gas extraction. A major foe of expanding Medicaid in the state after the passage of the Affordable Care Act, Hughes has also opposed the state’s shut-down orders to contain the novel coronavirus, which is now surging in the state, with more than 14 straight days of increased positive cases. He complained at a debate recently that Democrats’ switching parties to vote in the closed GOP primary was “brazen behavior” targeted directly at him.

Already there’s talk of changing the rules so this can’t happen again. State Rep. Casey Snider (R) who represents Cache County in Northern Utah, is planning to propose a bill in the 2021 legislative session to require people who change their party affiliation to remain in the party for six months. A measure to ban people from switching parties six months before a primary is also under consideration. “My idea is, if you come, you’ve got to stay awhile,” Snider told the Deseret News recently. The measures, of course, are only targeted at the GOP. Democrats in Utah have open primaries, where anyone can vote.

Dabakis isn’t too concerned about any such changes. He said he might just remain a Republican and form an “Obama caucus” in the GOP, to push the party in a more moderate direction on issues from health care to air pollution. His party-switching project has had some other surprising ripple effects. Down-ballot Republicans in tight races have been reaching out for the first time to ask him for endorsements. He thinks that the Democrats voting in the GOP primary could have an impact on the state attorney general’s race as well as a couple of legislative races. Recently a guy challenging a Republican incumbent in Salt Lake City called him and said, “4,400 of your people had registered to vote in my district. Send ‘em a message and tell ‘em I’m a good guy!”

Dabakis says that he thinks what he’s doing could be a model for other western states, where Republicans control everything. “We’ve become a tipping point in a lot of these Republican races,” he says. “If it works, there can at least be an incentive for the new governor to listen to us.”

Correction: The original version of this article misstated the number of Republicans in the Utah House and the ratio of registered Democrats to Republicans. While historically Republicans have outnumbered Democrats in Utah 5 to 1, since 2018, Democratic registration has soared and closed that margin.