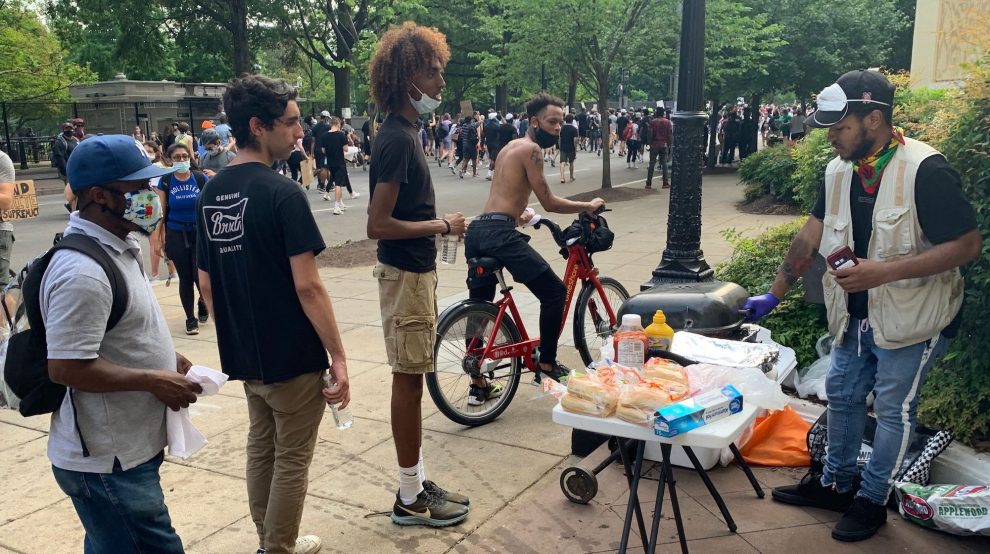 On Thursday afternoon, H St. in downtown Washington, DC—which only days before had been the scene of a violent encounter between law enforcement and protesters—had become a kind of open market. Tents popped up and young men were pulling out supplies from the trunk of an open hatchback; music played while pedestrians wandered up and down the street; hotdogs were grilled and handed out. All in anticipation of the thousands of demonstrators who were arriving to peacefully protest systemic racism in response to the death of George Floyd, an unarmed black man who was killed by Minneapolis police on Memorial Day. This area was near the exact site where three days earlier, federal law enforcement used tear gas and rubber bullets to scatter protesters so President Donald Trump could march over from the White House for his now notorious photo-op while brandishing a Bible.

Trump’s handling of the demonstrations and the helicopter tactics used on protesters by DC National Guard has drawn the ire of many Americans, including fellow Republicans and the military establishment. But it may have have had an unintended consequence: The protests have grown in number since then, as has an increasingly sophisticated infrastructure of grassroots organizations to support them. What started as little stacks of free water on street corners has evolved into a complex collection and distribution system to provide supplies for those up and down the route marchers have been taking.

The planning mostly happens over encrypted chats among people who’ve never met in real life in order to make progress on a set of goals that didn’t exist two weeks ago. It’s hard to identify an organization at the center of it all. In many cases, people just packed whatever material they thought would be useful—masks, snacks, goggles, athletic tape, band aids, milk and saline solution for instance—and headed down to the White House. The tables and coolers quickly turned the area into a bazaar of goodwill and free stuff. Beginning with their own money, those who were there quickly received donations from supporters.

By 6 pm, as protesters began pouring into DC’s downtown, Reggie Guy had just finished grilling his first round of free hotdogs in front of St. John’s Church, where Trump had staged his photo op. “You cannot sustain these emotions on granola bars,” he told me as he distributed hot dogs in buns to passersby. “I’m going to be out here until this stops. Hopefully I’ll be here for months, years.” In less than one minute, three protesters donated a total of $45; he planned to reinvest it in his free hotdog operation. Between taking donations from passerby and hand ing out hotdogs to whoever was hungry, Guy gestured to his grill. “This is my protest,” he said.

Reggie Guy has a grill and free hotdogs on H. St. about 20 feet from where Trump had his bible glamour shots. “You cannot sustain these emotions on granola bars.” Within a 45 second window, marchers donated as many dollars. That cash is going to buy more hotdogs. pic.twitter.com/oXNlSdPbyt

Several yards away, Jasmin and Jessica stood with coolers of ice full of water, Gatorade, fruit snacks, and Nutri-grain bars they had bought with $500 in donations they had collected. Tom Brown, co-owner of a Shaw neighborhood bar called Passenger, rode his bike to the pair and offered to deliver ice for the coolers since he had “two machines that can producer 100 lbs of ice an hour,” and no customers.

Along the plaza in front of the White House, some demonstrators arrived in their cars and set up tables and tents. Jade was there and explained she decided to pivot from marching to offering supplies on account of her “30-year old knees.” Eric Mowinksi, who was parked nearby, drove his “beat to shit” hatchback “battle cruiser” from Arlington, Virginia, to distribute supplies on Wednesday. He planned to stay for two hours but ended up staying for 10. “I know there are 10,000 people in this city trying to do the same,” he said.

Mirabelle is an expensive restaurant not far from the White House, which is usually the scene for lobbyists, lawyers, and administration officials to dine on elegant French food. In its patio, medical volunteers took inventory of gauze, rubbing alcohol, and antacid compounds protesters have dissolved to rinse eyes inflamed by pepper spray, which had come through GoFundMe donations and local churches. Since Monday, the number of medics supporting protesters has multiplied from less than a dozen to almost 60. Wearing red, white, and blue crosses of electrical tape across their shirts, the group includes local activist groups like DC Street Medics, YSocialWork, Black Lives Matter DC, and the recently-formed Freedom Fighters DC, contribute and direct supplies and volunteers, The real decisions appear to be made on an ad hoc basis by the medical workers on the ground.

Medics and their supplies. The medic groups at DC protests have ballooned from less than 10 to more than 55 in just a few days. A conglomeration of groups without a name, that communicates via discord, supplied by donations—its all ad hoc. pic.twitter.com/55UOSXemJ2

Less than a week earlier, Philomena Wankenge, the founder, posted a tweet gauging interest in starting an activist group. According to Jacqueline LaBayne, the organization’s spokesperson, “Group chats later we formed a board of directors.” A week into its existence, FFDC has a seven member board, five committees, a volunteer list of 300, at least 500 individual supply donations, and 20,000 Instagram followers. “We’ve had restaurants and stores reach out to us saying they’re accepting donations for us,” LaBayne said. “Had Chelsea Clinton retweet our supply drop off. Black Lives Matter DC endorsed us. Elizabeth Warren endorsed us. It’s definitely getting a lot traction.”

Two of the businesses acting as donation drop off spots are 9:30 Club and Red Bear Brewing—one a longstanding bastion of the city’s counter-cultural scene, the other a recently-opened brewery known for its inclusive events. Bryan Van Den Oever, one of Red Bear’s co-owners, said that when management learned that FFDC was on the hunt for a donation drop-off space, they jumped. “We’re more than comfortable being drop off location,” he said. “We took a page from the Hong Kong protests and we asked for street cones and umbrellas. We basically just put out what our needs are and the community responded.”

How are we responding to the protests? By supporting them! We want to thank the @FFDC2020 for working with us. A huge thank you to everyone who donated. We love you all. Check it out: https://t.co/xRGJUd9GdN

From there, donations move to a non-disclosed location, where they can be organized and prepared for distribution at future events. Unsurprisingly, information on where protesters can pick up those goods travels through social media.

So far, these new networks  have been able to support demonstrations that are in the same proportion to the amount of supplies they’ve collected. On Saturday, FFDC and Black Lives Matter DC have events planned that they anticipate will be even larger than this week’s protests. It’s likely, given on what has happened already, the supplies will keep pace with the demand.