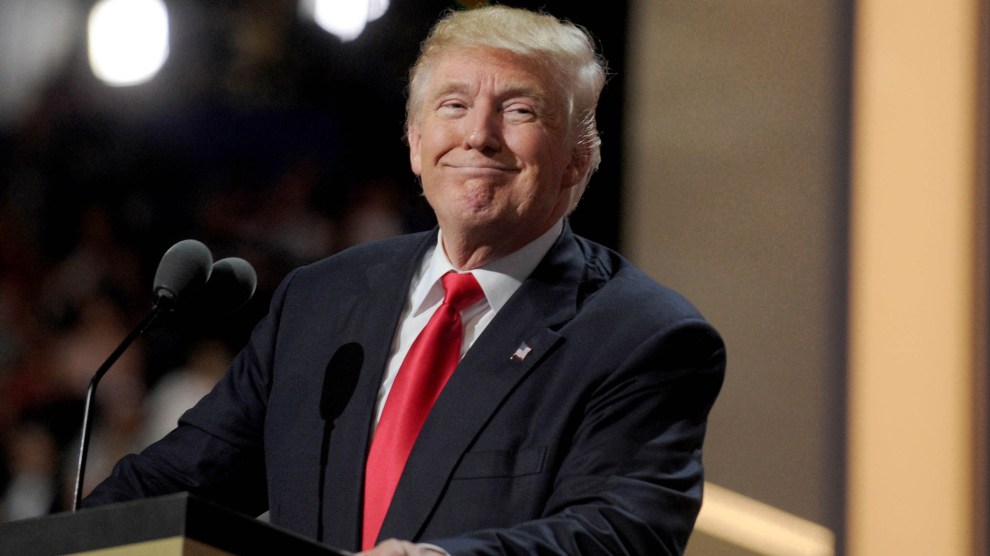 While you were worrying about a global pandemic, a collapsing economy, an election threatened by disinformation and Russian intervention, and, of course, murder hornets, Donald Trump took a step to make the world even more dangerous. He declared on Thursday the United States would pull out of an important arms control agreement, the Open Skies Treaty. Negotiated three decades ago, this agreement permits nations to fly into each others’ air space to monitor any military preparations that might indicate war is coming. Worse, as the New York Times points out, “Trump’s decision may be viewed as more evidence that he is preparing to exit the one major arms treaty remaining with Russia: New START, which limits the United States and Russia to 1,550 deployed nuclear missiles each.” That important arms accord expires in February 2021.

Trump’s latest action follows a pattern of him ripping up treaties that aim to control the proliferation of nuclear arms and prevent nuclear war. In 2018, he blew up the Iran nuclear deal negotiated by President Obama (and a handful of other countries). Last year, he shredded the Intermediate-Range Nuclear Forces Treaty. All of this is worrisome. But what makes it more alarming is that, as I have previously written, Trump has a history of uttering remarks about nuclear weapons that display his profound ignorance about this all-important subject and that suggest he believes a nuclear conflict is inevitable and perhaps destined for the near future. Moreover, he seems to hold a simplistic and dangerous more-is-better approach when it comes to nuclear weapons. It’s pretty clear that a guy who cannot understand the science related to a pandemic is not going to do better related to nuclear weapons policy. Still, Mr. Bleach is in charge of a nuclear arsenal that can destroy the world several times over.

Though his demolition of the Open Skies treaty is eclipsed by the submicroscopic coronavirus threat at hand, it is a profound act of destabilization that could lead to destruction and death far worse than what the global community is now experiencing. I could explain all the details and consequences of this misguided Trump action. But I don’t think I could do better than the experts at the Arms Control Association. They put out a statement that sums up the recklessness of Trump’s decision, and I’m just going to publish it here. Keep this in mind: Just as Trump has claimed he’s an expert on public health, he has also declared he’s an expert on nuclear weapons. Heaven help us.

The Trump administration reportedly will announce that it intends to pull the United States out of the 1992 Open Skies Treaty, a valuable arms control and security agreement intended to reduce risks to the United States and its European allies.

“The Open Skies Treaty has helped preserve the post-Cold War peace. It allows the 34 participating nations, including the United States and Russia, to fly unarmed observation aircraft over one another’s territory. This helps preserve a measure of transparency and trust, thereby enhancing stability and reducing the risk of conflict,” says Thomas Countryman, the former U.S. acting undersecretary of state for arms control and international security, and now chair of the board of the Arms Control Association.

“A unilateral U.S. exit from Open Skies would undermine our security and that of our European allies, all of whom strongly support the treaty,” Countryman added. “It has the effect—and perhaps this is the intention—of signaling a diminished U.S. commitment to its NATO allies.”

“U.S. and allied treaty flights over Russia provide valuable information about Russian military activities, thereby enhancing stability and reducing the risk of conflict in Europe,” says Kingston Reif, Arms Control Association director for disarmament and threat reduction policy. “The treaty has been an especially important tool in responding to Russia’s aggression against Ukraine.”

“There is strong bipartisan support in Congress for maintaining U.S. participation in Open Skies,” Reif notes. “The administration’s announcement of withdrawal is a slap in the face to Congress as it violates notification requirements written into law last year.”

The administration told reporters the formal notification of withdrawal would be effective immediately and the withdrawal itself will take effect in six months. However, such action violates Sec. 1234 of the fiscal year 2020 National Defense Authorization Act, which requires the administration to notify Congress 120 days ahead of a U.S. notification of an intent to withdraw.

The Trump administration cites Russian noncompliance as a motivating factor for its decision. Disputes have arisen because Russia has imposed a sublimit of 500 kilometers over the Kaliningrad Oblast for treaty flights, refused access to observation flights along its border with the Georgian regions of South Ossetia and Abkhazia, and denied planned U.S.-Canadian flights over a Russian military exercise in September 2019.

However, Russia recently approved and allowed a joint U.S.-Estonian-Latvian treaty flight over Kaliningrad this year that was not subjected to the earlier Russian restrictions. In addition, Jim Gilmore, U.S. representative to the Organization for Security and Co-operation in Europe, said March 2 that Russia will no longer raise an “objection” for the United States and its allies to “fly over one of their major exercises.”

As President Reagan’s former Secretary of State, George Shultz, former Senator Sam Nunn, and former Secretary of Defense Bill Perry wrote in October 2019 in the Wall Street Journal: “As with any treaty, implementation disputes arise. Current disagreements are related to underlying territorial and political issues between Russia and some of its neighbors. But these problems can be solved through professional, pragmatic diplomacy, not by abandoning treaty commitments.”

“Today’s announcement is part of a troubling pattern. The Open Skies Treaty is not the first, and may not be the last, nuclear or conflict risk reduction agreement this administration has withdrawn from without a viable strategy for replacement,” observes Daryl G. Kimball, executive director of the Arms Control Association.

“Failure to take up Russia’s offer to extend by five years the 2010 New Strategic Arms Reduction Treaty, which the administration has threatened to do, would compound the damage and further heighten the risk of unconstrained military and nuclear competition between the United States and Russia at a time when the world can ill afford it,” he warns.