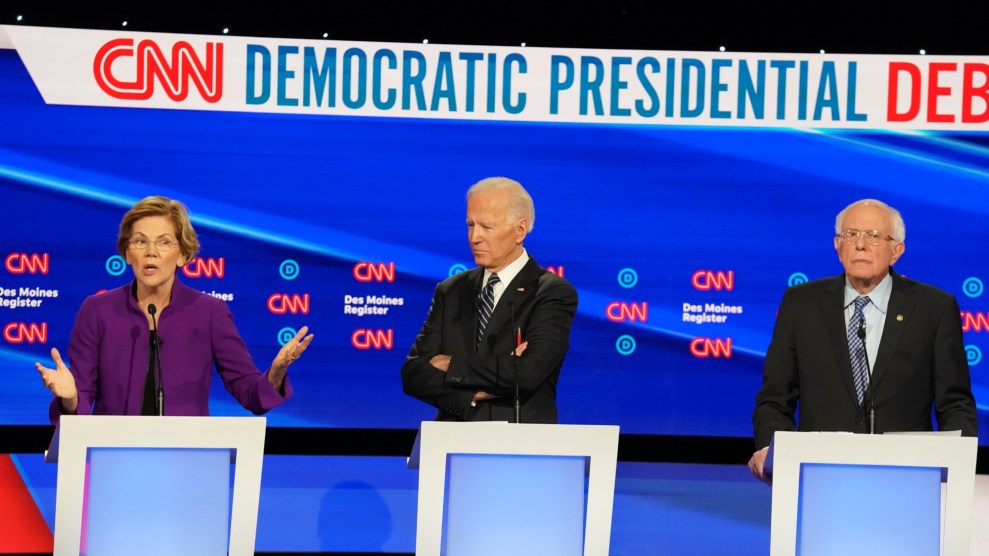 When Joe Biden’s campaign released an ad last month bashing Donald Trump’s slow response to the coronavirus pandemic, the response was immediate and damning—from progressive Democrats. Asian American advocacy groups were quick to notice the spot’s language—”Trump rolled over for the Chinese,” the ad’s grim narration notes at one point—which was trading on xenophobia at a time of rising racism against Asian Americans.

What came next is an example of the slow-footed but consistent way Biden and his advisers have responded to the progressive left on matters of foreign policy. They listened and—ever so slightly—adjusted. When Biden released a follow-up ad last week, no mention was made of “the Chinese” or of Trump’s travel ban, which Biden’s campaign had blasted as “not exactly airtight” in the first ad.

Democrats have not united around a standard message on China even as Republicans have grown increasingly harsh in their rhetoric about the Chinese Communist Party and its leader, Xi Jinping. Biden’s ability to pivot from a hawkish ad to one more subdued in its treatment of China as a whole was reassuring to progressives who have sought to find common ground with his campaign since Bernie Sanders, his chief Democratic primary rival, ended his presidential bid last month.

Foreign policy had been a backwater issue for much of the Democratic presidential primary and has only recently emerged as a general election issue as Biden and Trump have traded barbs over China and the origin of the coronavirus. Instead the spotlight went to intra-party friction on domestic issues such as health care, economic reform, and criminal justice. When the Biden campaign rolled out six “unity task forces” with Sanders last week, the focus was limited to those key domestic policy issues on which Sanders, and the progressive movement more broadly, has noticeable contrasts with Biden. “There could have been eight or 10 working groups,” Faiz Shakir, Sanders’ campaign manager, said. “You can’t bite off more than we can chew, and we chose areas where there has been healthy debate in the Democratic Party.”

But behind the scenes, progressive groups have kept in touch with Biden’s advisers to test out how much his views have changed since he left government, most recently on a Wednesday call with two of his foreign policy advisers. This formal conversation had been preceded by a number of informal conversations that liberal operatives have had with Biden advisers such as Jake Sullivan, who served on Biden’s national security team during the Obama administration. While the lack of public-facing working groups has been a source of irritation for scholars and activists seeking an audience with the campaign, key left-leaning players have not struggled to connect with the Biden camp.

Biden is not perfectly aligned with Sanders and other Democrats like Elizabeth Warren on foreign policy. No one has forgotten that he voted for the Iraq War. But on issues where there is a growing consensus within the party, such as reducing US military commitments overseas and ending support for Saudi Arabia’s war in Yemen, Biden has moved toward the progressive view that US interventions abroad often cause more harm than good and that climate change and pandemics ought to be a greater national security priority than counterterrorism.

Last year, Biden called on the United States to end its material support for Saudi Arabia’s catastrophic intervention into Yemen’s civil war, a reversal of the Obama administration’s decision to support the Saudis with funding, weapons, and mid-air refueling. Biden, who once nearly took on a “mentor” role to Saudi prince Mohammed bin Salman, has been much more critical of Saudi leadership in recent months, saying last year that, as president, he would make Saudi Arabia into a “pariah.”

His shift on Saudi Arabia mirrors a turn within the party, especially among former Obama officials, away from the longtime US ally. In November 2018, 30 senior Obama national security officials signed a letter urging an end to American support for the war in Yemen. Among the signatories were three former Biden advisers—Tony Blinken, Colin Kahl, and Jake Sullivan—who now play key roles coordinating foreign policy issues for the campaign. The same officials Biden might turn to for advice in a future administration have often been forthright about their own evolution on issues like Saudi Arabia through public forums such as the Pod Save the World podcast from Crooked Media. Those conversations show “a level of self-accountability that you have never seen from the architects of the Iraq War,” Duss said, “which was obviously a far bigger and vastly more consequential blunder.”

There are still areas where the divide between Biden and the progressive flank is much starker. Last year, Sanders argued in favor of conditioning US aid to Israel on a “change” in policies in the Gaza Strip, where Prime Minister Benjamin Netanyahu’s government has maintained a blockade. Biden said the idea of conditioning aid to one of America’s closest allies was “absolutely outrageous” and doubled down on his position as recently as this week. At a virtual fundraiser hosted by a former ambassador to Israel and a Jewish studies professor, Biden said, “Criticism of Israel’s policy is not anti-Semitism.” But in a possible nod to controversies that have engulfed liberals like Rep. Ilhan Omar (D-Minn.), he added, “But too often that criticism from the left morphs into anti-Semitism.”

A May 11 letter from dozens of progressive and antiwar advocacy groups outlined other flashpoint issues, including an increase in refugee admissions, a slimmer Pentagon budget, and support for a repeal of the 2001 Authorization for Use of Military Force. Biden has promised to end America’s “forever wars” and said the United States “should not impose regime change on other countries,” but it’s not clear that he is as bullish as progressives are when it comes to cutting defense spending. In November, he told Military Times that the United States can “maintain a strong defense and protect our safety and security for less,” but said the central question is “not how much we invest—it’s how we invest.”

But for all the concern over the national security promises Biden will or won’t make, of equal concern is who he might appoint to key posts within his administration with broad jurisdiction over the country’s foreign policy agenda. Given that he was once chairman of the Senate Foreign Relations Committee and the face of a number of Obama’s diplomatic missions, there’s good reason to believe a President Biden would personally oversee many of his own initiatives or appoint longtime, like-minded loyalists to his cabinet and other high-level roles. But some lower-level appointments, such as those who serve as assistant secretaries or in policy positions in the Defense Department or CIA, could be key figures for progressives to exercise influence over.