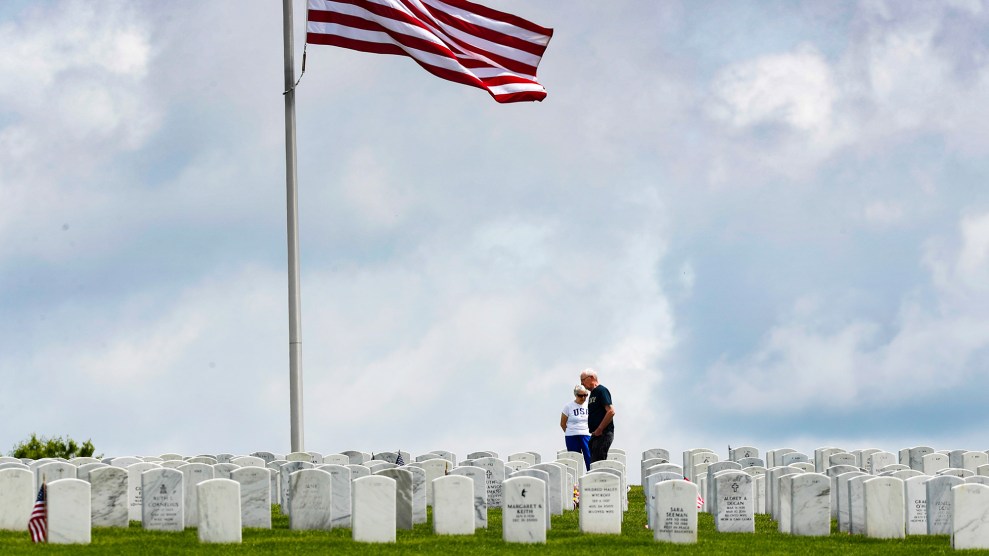 Albert Kool, right, and his wife Dolly, walk through the grave stones at the Cemetery of the Alleghenies, a Veterans Administration National Cemetery during the Memorial Day Holiday weekend.

Pandemic or no, resilient Americans will celebrate Memorial Day together. Be it through Zoom or spaced six feet apart from ten or less loved ones at backyard cookouts, folks will find a way. In these peculiar gatherings, is it still considered cynical to wonder if people will spare much actual thought for American soldiers still dying abroad—or question the utility of America’s forever wars? Etiquette aside, we think it’s obscene not to.

Just as the coronavirus has exposed systemic rot, this moment also reveals how obsolete common conceptions of U.S. warfare truly are—raising core questions about the holiday devoted to its sacrifices. The truth is that today’s “way of war” is so abstract, distant, and short on (at least American) casualties as to be nearly invisible to the public. With little to show for it, Washington still directs bloody global campaigns, killing thousands of locals. America has no space on its calendar to memorialize these victims: even the children among them.

“Just as the coronavirus exposed much internal systemic rot, this moment also reveals how obsolete common conceptions of U.S. warfare truly are.”

Eighteen years ago, as a cadet and young marine officer, we celebrated the first post-9/11 Memorial Day—both brimming with enthusiasm for the wars we knew lay ahead. In the intervening decades, for individual yet strikingly similar reasons, we ultimately chose paths of dissent. Since then, we’ve penned critical editorials around Memorial Days. These challenged the wars’ prospects, questioned the efficacy of the volunteer military, and encouraged citizens to honor the fallen by creating fewer of them.

Little has changed, except how America fights. But that’s the point: outsourcing combat to machines, mercenaries, and militias rendered war so opaque that Washington wages it absent public oversight or awareness—and empathy. That’s the formula for forever war.

In recent years, U.S. troops were killed not only in Iraq and Afghanistan, but also Syria, Kenya, Somalia, Yemen, and Niger. Few Americans could locate these countries on a map; fewer knew its soldiers fought there. Additionally, Pentagon pilots and proxies killed people in Libya, Pakistan, and elsewhere in West Africa without losing a single soldier.

The campaigns in Somalia and Yemen best expose the absurd casualty inequity of modern American warfare. In the former, only a few U.S. service members have been killed in an 18-year intervention. Conversely, hundreds of thousands of Somalis died or were displaced as a direct or indirect result (an exacerbated famine, for example) of a largely U.S.-catalyzed war. In Yemen, just one American soldier died in combat, compared to more than 100,000 locals—including 85,000 children starved to death—in a terror campaign the Saudis couldn’t wage without U.S. complicity.

No one wants to see American troops killed, but a death disparity so stark stretches classic definitions of combat. Yet for locals, it likely feels a whole lot like “real” war on the business end of U.S. bombs and bullets.

So this year, given the stark reality that even a deadly pandemic—and pleas for global ceasefire—hasn’t slowed Washington’s war machine, it’s reasonable to question the very concept of Memorial Day. There are also important parallels with Labor Day—the holiday bookend to today’s seasonal kick off.  Just as memorializing America’s obscenely lopsided battle deaths is increasingly indecent, a federal holiday devoted to a labor movement the government has aggressively eviscerated is deeply troubling.

With unemployment sky-rocketing to Great Depression rates, and income inequality at Gilded Age levels, both holidays now “celebrate” egregious blood and treasure disparity. For example, sifting through the Department of Labor’s statistics reveals that some 8,000 contractors have been killed in America’s war zones. That outnumbers U.S. military fatalities. Since Washington has progressively privatized and outsourced its wars, perhaps Americans should also observe a Mercenary Memorial Day.

Widening the aperture unveils thousands more “non-combat”—but war-related—uniformed deaths in desperate need of memorializing. From 2006-2018 alone, 3,540 active-duty service members took their own lives—just a fraction of the 15-20 daily veteran suicides—and another 640 died in accidents involving substance-abuse. Each death is unique, but studies demonstrate that the combined effects of PTSD and moral injury—these wars’ “signature wound“—contributed to this massive loss of life. On a personal level, at least four soldiers under our commands took their own lives, as have several friends. These are real folks who left behind real loved ones.

Faced with unrecognizable brands of war, most people substitute nostalgia and myth. Grappling with war’s reality has implications that are too disturbing. Far simpler and more satisfying is to commemorate long past sacrifices at Normandy and Iwo Jima, rather than more confounding losses in Niger and Iraq. The temptation persists even as the last World War II veterans pass; old notions of what combat is die with them.

The United States has lost its ethical and strategic way. Riddled with a virus that has now killed more Americans than the Revolutionary, Mexican, Spanish, Indian, Philippine, Vietnam, Persian Gulf, Iraq, and Afghan Wars combined, this nation requires serious soul-searching. Reimagining its bookended summer celebrations might be a good start; but it won’t be easy.

In a new take on an old tradition, perhaps it’s proper to not only pack away the whites, but don black as a memorial to a republic in peril.

Matthew Hoh is a member of the advisory boards of Expose Facts, Veterans For Peace and World Beyond War. He previously served in Iraq with a State Department team and with the U.S. Marines. He is a Senior Fellow with the Center for International Policy.

Danny Sjursen is a retired U.S. Army officer and contributing editor at antiwar.com. He served combat tours in Iraq and Afghanistan and later taught history at West Point. He is the author of a memoir of the Iraq War, Ghostriders of Baghdad: Soldiers, Civilians, and the Myth of the Surge.