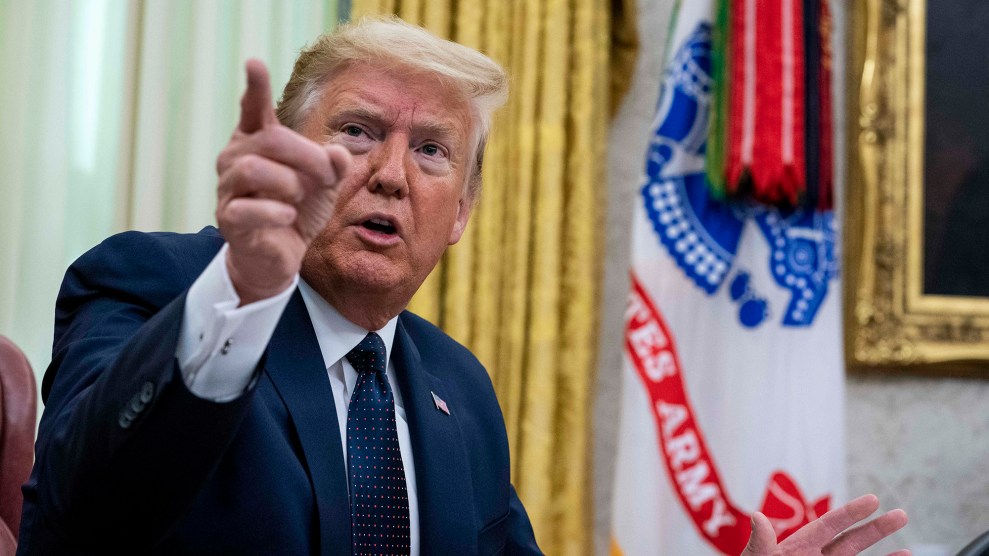 President Donald Trump tweeted false information about mail-in ballots this week, and Twitter, which for years has avoided fact-checking the president, finally did so. Two of the president’s tweets that claimed postal balloting would unleash massive fraud were annotated with unobtrusive “get the facts” tags which provided links to contrary, correct articles about voting by mail. It was a modest and long-delayed step, but on Thursday evening the president retaliated with an executive order targeting social media companies for “selective censorship” against him. In 48 hours, Trump and his administration had pulled off a masterful demonstration of their tried-and-true political playbook for dealing with social media platforms: redirect attention from the president’s misbehavior while pressuring the companies to bend to their will.

The argument is a fundamental mischaracterization of what social media platforms are and how they work.

As in the past, the order is legally unserious political theater. (A week before the 2018 midterms, Trump promised to sign an executive order ending birthright citizenship, as if the president can unilaterally delete sections of the Constitution he does not like.) After a draft leaked Thursday morning, most legal experts declared it unenforceable. It ignored judicial precedent and separation of powers doctrines. Former Justice Department official Marty Lederman responded to a question about what would happen if it were challenged in court by tweeting, philosophically, “What would it mean to ‘challenge’ nothing?”

In truth, the executive order was never meant to be a serviceable legal cudgel, but to serve as a general threat to the online platforms: thwart Trump’s ability to spread his message in any way and he will seek retribution.

In the order, Trump’s relies on highfalutin language about how social media platforms are a digital public square: “In a country that has long cherished the freedom of expression, we cannot allow a limited number of online platforms to hand pick the speech that Americans may access and convey on the internet.” Mark Zuckerberg has echoed the framework, hanging his decision not to fact-check posts and ads by politicians on the argument that Facebook is a public forum where free speech must flourish. As Trump’s feud with Twitter birthed this new executive order, Zuckerberg called into Fox News to reassure the president that, unlike Twitter, his company does not want to be an “arbiter of truth of everything that people say online.” He continued, “Private companies probably shouldn’t be, especially these platform companies, shouldn’t be in the position of doing that.”

Underlying this strain of argument is a fundamental mischaracterization of what social media platforms are and how they work. Whatever the merits of a digital public square, Facebook is not it. But both Trump and Zuckerberg have an interest in perpetuating the fallacy that it is.

Facebook is a private company that decides what content you see and what ads you see. It shows you groups and recommends you join them. You do not choose your own adventure on Facebook; it’s carefully tuned algorithms take you by the hand and lead you where they want you to go: the most engaging content. The more engaged you are, the more money Facebook makes on ads. And the most engaging content is the most extreme content. When Zuckerberg says that he won’t fact-check politicians because their speech is newsworthy, he is reserving the right not just to let their falsehoods appear, but to amplify them across his platform while making money from their spread.

Zuckerberg’s arbiters of truth line “suggests that there’s a neutral baseline that Facebook is hewing to—but there isn’t,” says David Ardia, an expert on media law at the University of North Carolina School of Law. “Facebook already has its hand deeply in the content that we see on its platform.”

“Our algorithms exploit the human brain’s attraction to divisiveness.”

Facebook has knowingly operated systems that funnel users toward dangerous content. According to a Wall Street Journal report this week, a 2016 internal report found that “64% of all extremist group joins are due to our recommendation tools,” driven by the company’s algorithms. “Our recommendation systems grow the problem.” Two years later, the Journal reported, another internal report made the same warning: “Our algorithms exploit the human brain’s attraction to divisiveness.” Unless Facebook changed those algorithms, they would feed users “more and more divisive content in an effort to gain user attention & increase time on the platform.” But Facebook didn’t change, in part because displaying ads next to extremist content helps it earn billions, but also, the Journal explained, to appease Trump and conservatives.

Facebook’s decision to boost divisive content has been an immense boon to Trump. “He is a president more than any other who has benefited from the attention economy,” says Ardia. “From his early move to reality television to his embrace of social media and his highly effective use of it in the 2016 election, he has leveraged these platforms in a very successful way. Throwing a monkey wrench into how they operate may not be in his longterm best interests.” Indeed, Trump has no desire to actually change, as his campaign put it, how social media platforms “manipulate the American people.” His executive order is a reminder that there will be consequences and protests should they interfere with his efforts to do the same.

Together, Trump and Zuckerberg want people to believe that Facebook is a public forum, when in reality it is run according to the interests and prerogatives of a private company, beholden to its shareholders. Both benefit from this arrangement. But as a private business, Facebook and the people who own it and work at it have not only the right but arguably the moral imperative to mitigate harm and extremism. Long after this news cycle has passed, that truth about what these platforms really are will remain the same.