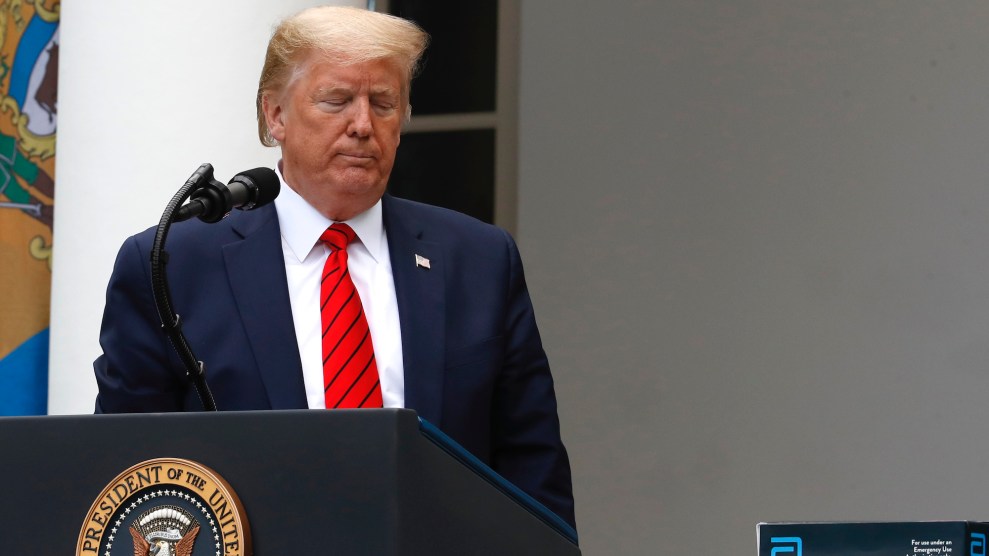 President Donald Trump leaves at the end of a White House briefing about the coronavirus.AP Photo/Alex Brandon

On Tuesday, the Supreme Court heard more than four hours of arguments over whether two banks and an accounting firm should obey subpoenas, issued by Congress and New York prosecutors, for Donald Trump’s financial records. Trump’s attorney Jay Sekulow was blunt about why (at least) prosecutors shouldn’t be allowed to pursue those documents.

The court heard arguments in two closely related cases. The first involves subpoenas issued by three Democratic-controlled House committees investigating a variety of issues involving the president, including the IRS’s handling of his tax returns and allegations of foreign interference in the 2016 election. The second case concerns subpoenas issued by a grand jury convened by New York attorney general Cyrus Vance, who is probing hush money payments allegedly made to women Trump conducted affairs with prior to becoming president. The subpoenas are nearly identical. They seek bank records from Capital One and Deutsche Bank, the president’s largest lender, including internal bank communications discussing concerns about potentially suspicious transaction activity related to Trump Organization accounts. Both New York prosecutors and the House committees are also requesting that accounting firm Mazars turn over copies of Trump’s tax returns. Trump sued to block the subpoenas, and the cases have wound their way to the Supreme Court. The banks and accounting firm have indicated they will comply with the subpoenas if the court permits them to release the records.

In the case of the New York grand jury, Sekulow argued that responding to a subpoena would just be too distracting for a president. He suggested that any grand jury subpoenas involving the president should be delayed until he leaves office.

Many of the justices—even some of the court’s conservative members—seemed skeptical that a subpoena would interfere with a president doing his or her job. Chief Justice John Roberts questioned Sekulow’s argument that Vance’s grand jury investigation was proper, but the subpoena for information it needed for the probe should be off limits.

“In other words, it’s okay for the grand jury to investigate, but it can’t use the usual and most typical device?” Roberts asked.

Several justices indicated they saw a wide gulf between determining if a prosecutor really needed documents in a case involving the president, and stating that the president (or his banks and accountant) are immune from subpoenas.

If the president feels it is too onerous to meet a subpoena’s demands, he can—like anyone else—go to a judge and ask for some flexibility, she noted.

“The courts in reviewing those of course should take seriously the president’s objections and treat those with a certain kind of sensitivity and respect due to someone who is a branch of government,” she said.

The specter of Paula Jones’ 1998 lawsuit against Bill Clinton hung over the arguments. In that case, Clinton had advanced a similar argument that the matter should be deferred, but the Supreme Court unanimously determined that Jones had the right to pursue her lawsuit against the president—he was not above that—but that he was given some special dispensation for when and where he must respond to demands for a deposition or other information.

“How is this more burdensome than Paula Jones v. Clinton?” asked Justice Neil Gorsuch, one of Trump’s appointees. “There they sought the deposition of the president while he was serving; here they’re seeking records from third parties.”

Sekulow also argued that allowing Vance’s investigation would open the floodgates to as many as 2,300 local prosecutors launching politically motivated probes against a president—another argument that received pushback from justices.

Carey Dunne, who represented the Manhattan district attorney’s office, also dismissed that idea, noting that not only did the Supreme Court permit the Jones lawsuit to move forward, it allowed the Watergate investigation to proceed against Richard Nixon in the 1970s.

“There’s no empirical basis in history for this apocalyptic prediction,” he contended. “The same claim was made and rejected in Nixon and Clinton, those were decades ago, and there has been no flood of prosecutions or investigations.”

In between Trump’s attorneys and Vance’s office, the Department of Justice argued for the implementation of some standard for subpoenas involving the president, stopping well short of advocating that such requests should be banned until he or she leaves office.

The justices generally seemed more skeptical of the case presented by the House in its pursuit of the president’s financial records. Although none seemed to accept the idea that Congress couldn’t investigate a sitting president, Douglas Letter, general counsel to the House of Representatives, seemed unprepared to tell the justices where that investigative power should stop. Each of the committees has advanced arguments over why the documents they’re seeking are needed for legislative purposes. But when pressed by justices Sonia Sotomayor and Brett Kavanaugh, Letter was unable to say whether, for example, a president’s personal medical records were fair game.

The Supreme Court is expected to rule on the cases in late June or early July.