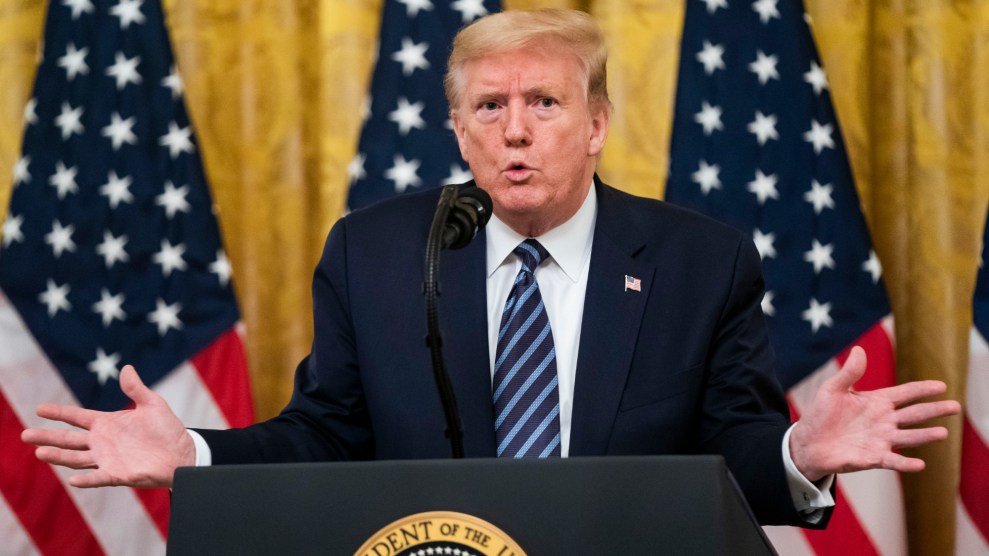 A full-on freakout on the right over the revelation that the FBI planned for the prospect that then-National Security Adviser Michael Flynn would lie in a January 2016 interview, has, inevitably, drawn in political operative Roger Stone. President Donald Trump on Thursday suggested he may pardon both Flynn and Stone, each of whom was found to have lied to federal investigators about the Trump Russia scandal.

“What they did to Gen. Flynn, and by the way, to Roger Stone and to others, was a disaster and a disgrace, and it should never be allowed to happen in this country again,” Trump said when asked about pardoning Flynn.

Notably, Trump and his backers, by and large, are not saying that Flynn and Stone didn’t lie to federal investigators. Instead they are implying that lying to investigators doesn’t matter.

Trump and his backers start with the premise that the Trump-Russia scandal was a “hoax,” a claim premised on the failure of special counsel Robert Mueller and congressional Democrats to prove a criminal conspiracy between the Trump campaign and Russia. As a result, Tump and company say, the investigations into their conduct were unfair, with any resulting perjury the product of overzealous prosecution.

This is Trump’s fundamental gaslight. Flynn and Stone’s lies, and those of Trump himself, helped to prevent investigators from learning what really happened with the Trump campaign and Russia in 2016, benefiting first and foremost Trump, who falsely proclaimed exoneration. In pardoning Stone and Flynn, the president would reward them for that service, and use the pandemic and the volume of his supporters to drown out anyone noting the con.

The argument that Flynn and Stone were railroaded, long popular talking points on the right, got a boost Wednesday, when federal prosecutors in Flynn’s case disclosed handwritten notes that Bill Priestap, then the FBI’s head of counterintelligence, made prior to FBI agents interviewing Flynn at the White House in January 2016. The agents knew that Flynn had spoken in December 2016 to Sergey Kislyak, Russia’s ambassador to the US, about sanctions imposed by President Barack Obama on Russia, an apparent violation of the Logan Act. Preistap wrote: “What’s our goal? Truth/Admission or to get him to lie, so we can prosecute him or get him fired?”

“Those lies materially impaired the investigation of Russian election interference.”

While conservative pundits have treated these notes as smoking gun evidence that Flynn was framed, legal experts have noted that the FBI’s tactics with Flynn were not unusual. Federal agents often try to catch targets in situations where they will admit crimes or lie, opening themselves to prosecution. In a guilty plea, Flynn admitted to knowingly lying to the FBI agents. (He also said under oath that he did not believe the FBI entrapped him.) Flynn’s lawyers are trying to switch his plea to not guilty, and are also asking for the case to be thrown out. The judge overseeing the case has not ruled on those requests.

Trump has also seized on arguments by Stone’s lawyers that the self-described dirty trickster was unjustly convicted because the forewoman of the DC jury in social media posts criticized Trump; the judge in the case rejected this argument.

Stone and Flynn’s lies were part of a pattern. Mueller’s report, despite its muddled conclusions, indisputably revealed that the president and his advisers reacted to revelations of the campaign’s ties to Russia with epic dishonesty. Some lies were public: Trump claimed to have no business in Russia. In fact, at the time his employees were seeking Kremlin help advancing a Trump-branded project there. Trump campaign spokesperson Hope Hicks said in November 2016 that “there was no communication between the campaign and any foreign entity during the campaign.” Mueller noted more than 100 contacts by campaign with Russia alone.

Along with Stone and Flynn, former Trump personal lawyer Michael Cohen and former Trump campaign aide George Papadopoulos went to prison for lying to federal agents or lawmakers. Former Trump campaign aide Rick Gates and campaign chairman Paul Manafort were found to have lied to investigators, among other crimes. The Justice Department said in February that it was looking into whether Erik Prince, the Blackwater founder and a Trump campaign adviser, lied to the House Intelligence Committee in 2017 testimony.

Reliable Trump boosters like Sen. Lindsey Graham (R-S.C.), Rush Limbaugh, and Alan Dershowitz have derided perjury charges as “process crimes,” implying these were charges prosecutors brought because they couldn’t find anything more serious. Mueller and his prosecutors, however, have repeatedly said that lies by Trump associates handicapped their efforts. “The investigation established that several individuals affiliated with the Trump Campaign lied to the Office, and to Congress, about their interactions with Russian-affiliated individuals and related matters,” Mueller wrote. “Those lies materially impaired the investigation of Russian election interference.”

Trump was no passive observer of this. He actively encouraged associates to stonewall Mueller and Congress, dangling the prospect of pardons for aides who refused to cooperate. Mueller’s report examined 10 instances in which Trump may have obstructed justice to thwart the probe. Those include Trump pressuring then-FBI director James Comey to stop investigating Flynn in 2017. And one of Trump’s lawyers, John Dowd, left Flynn’s lawyer a voicemail in late 2017 suggesting Trump would remain supportive of Flynn if he did not give prosecutors evidence about Trump. (Dowd denies that this was an explicit offer of a pardon in exchange for silence.)

Trump himself refused to be interviewed by Mueller. And as Mother Jones has reported, the president appears to have lied in written answers he gave Mueller in which he claimed not to recall communications with Stone in 2016 about WikiLeaks. Testimony at Stone’s trial by Gates and former Trump campaign chairman Steve Bannon revealed that Trump spoke during the campaign with Stone about WikiLeaks, and that campaign officials viewed Stone as a conduit to WikiLeaks.

Flynn and Stone’s lawyers have argued that because prosecutors have not proved that their clients conspired with Russia, their lies to investigators should be set aside. “So much of this case deals with the question: So what?” Stone attorney Bruce Rogow said in his concluding remarks at Stone’s trial. Prosecutors and judges in those cases have repeatedly dismissed those claims.

Federal District Court Judge Amy Berman Jackson, in sentencing Stone, spoke at length on the impact of Stone’s dishonesty, noting he thwarted a key part of the House’s Russia investigation. “His pride in his own lies are a threat to our most fundamental institutions,” she said, “to the very foundation of our democracy.”