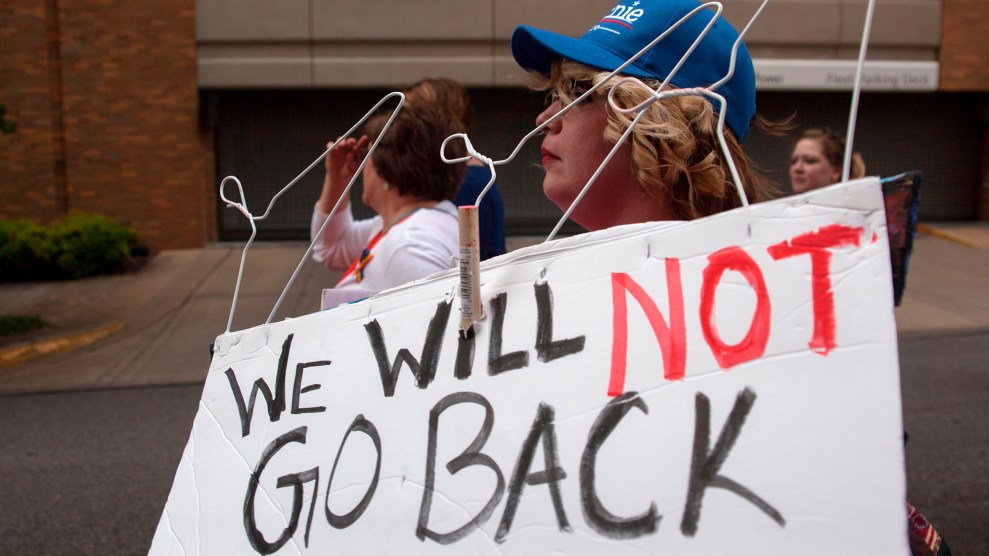 Protesters march through the streets of Birmingham, Alabama, during the March For Reproductive Freedom on May 19, 2019. Seth Herald/Getty

Exactly a year after Alabama passed into law one of the country’s most severe abortion restrictions, the state’s abortion fund is taking a major step toward expanding access to the procedure in the Southeast.

Gov. Kay Ivey signed the Human Life Protection Act, which would have effectively banned abortion in the state, on May 15, 2019, though a US district judge issued an injunction that temporarily blocked the law from going into effect. While its future remains in limbo, the passage of the ban drove home just how vulnerable access is in a state that has long been dedicated to winnowing away abortion rights through its legislature.

“I’d be surprised if we didn’t see more funds running clinics in the future.”

The state is down to three clinics, two of which were owned by aging proprietors—a fairly commonplace reality in several other states that are hostile to abortion rights. But Alabama is also home to robust grassroots abortion advocacy; one of the biggest beneficiaries of the backlash to last year’s law was the Yellowhammer Fund, the state’s most prominent abortion fund, which saw a massive influx of cash. Just days after the ban was signed into law, my Mother Jones colleague Marisa Endicott reported that the fund was able to support three times the number of clients as the year prior.

Now, on the anniversary of that dark day for abortion rights, the Yellowhammer Fund is purchasing a clinic in Tuscaloosa, the West Alabama Women’s Center.

“We’re probably going to need more clinics in safe places as executive orders slow things down, as whatever happens with SCOTUS slows things down,” says The Very Reverend Katherine Hancock Ragsdale, president and CEO of the National Abortion Federation, a professional association for abortion providers. “Existing clinics can’t necessarily handle the volume of the closures that could be looming.”

Today, though, is more than a local victory. In fact, it may herald a shift in abortion care strategy much more broadly. Traditionally, abortion funds, which offer financial and logistical assistance to people seeking abortion care, have remained separate from clinics—operating in tandem with them only insofar as to set their clients up with appointments and work through the financials. But consolidating their mission may be exactly what is needed to shore up the precarious network of access in the region and make abortion care available to low-income folks.

“I’d be surprised if we didn’t see more funds running clinics in the future,” says Gloria Gray, the former owner of West Alabama Women’s Center, who reached out to Yellowhammer to ask if it was interested in purchasing the clinic. “I think that would be a good, good way to go—I will say Yellowhammer has totally amazed me at how well they’ve been able to get to the donors, and how they have done as well as they have.”

Gray has owned and operated the clinic since 1993. In recent years, the clinic has provided more than half the abortions in the state, serving women across the Southeast as states in the region have implemented increasingly draconian abortion restrictions. Gray, though, felt now was time to step aside. “I was turning 70 years old,” she tells Mother Jones. “I wanted to enjoy my grandchildren, I wanted to travel a bit, I wanted to [go visit] my son—those were my main reasons for wanting someone else that I knew could keep the clinic open and would go in and run it well.”

Amanda Reyes, executive director of the Yellowhammer Fund, explains the organization’s decision to take over the clinic as it sort of coming full circle—after all, she tells me, Yellowhammer started by offering escort services to shield patients from protesters at the same Tuscaloosa clinic. “This gives us an opportunity to have a direct impact on access,” she says. “Even starting the fund was a bit of a pipe dream, but when we started the fund, we had an idea that we would like to buy or start a clinic if we were successful beyond our wildest dreams. And we were!”

“Those of us who are poised to take over this kind of work, we don’t have the money.”

The younger generation of abortion rights activists has often been more likely to work with abortion funds or in general activism than to work with or as abortion providers, in part because of a lower economic barrier to entry. Many clinic owners are of a generation that was less bogged down by student debt and the consequences of the 2008 recession; they purchased their businesses when the economy was steadier and the wealth gap was lesser.

“Those of us who are poised to take over this kind of work, we don’t have the money. It’s hard for us, we have all this student debt, we can’t always just spend hundreds of thousands of dollars on a clinic that might just be a money pit that we keep open because we believe in the ability of people to have abortion care,” Reyes, who is 31, tells me. “How the economy has played out over the last several decades is a major factor, and student debt is one of the dangers to keeping abortion clinics open.” Reyes adds that having a collective effort like an abortion fund makes for more possibilities than a single prospective buyer, and she explains that most of the clinic’s current staff plans to stay on—meaning they will be able to retain valuable institutional knowledge.

There are, of course, also the challenges and costs associated with keeping a clinic open, particularly in a red state, where anti-abortion legislation is always brewing in the background, creating expensive, burdensome restrictions and policies that clinics must follow to continue operating. “One of the reasons why [independent clinic owners] may have such a hard time retiring is that there’s not always a lot of money in this business,” Reyes says. “And it’s expensive to run this kind of clinic—you have to deal with TRAP laws and all kinds of things, you may not have savings.” Gray also admits that while it’s not why she’s retiring, the constant legislative onslaught, the stress of running a medical practice, and the regular abuse from protesters wore on her. She even recalls a time when an anti-abortion protester called her religious mother to inform her that her daughter had purchased an abortion clinic. “I did get tired, constantly being told what an evil person I was for doing what I did,” Gray says.

For Yellowhammer, the money for the acquisition was actually made possible by the extreme outpouring of support in the wake of last year’s ban. “That’s really fantastic, to be able to say that one year later, after [lawmakers] passed an abortion ban, we now have enough resources to buy a clinic and make not only abortion care more accessible, but comprehensive reproductive and sexual health care more accessible to people in Alabama,” Reyes says. “That’s not something [those lawmakers] were intending to do.”

Ragsdale acknowledges taking on an abortion clinic is a tall ask for anyone—which is another reason why abortion providers are aging out of the business even while there are not enough new providers to take their places, particularly in hostile states like Alabama. Ragsdale notes that red states often rely on traveling doctors to serve as abortion providers, as it’s less of a risk if their families live in a state that has more liberal views on abortion. “People go into [this field] out of passion,” Ragsdale says. “They go into it to serve their values and to do work that’s meaningful, and that’s great, but if you’re young, you also have a life to build, perhaps a family to build and support. You can’t just completely ignore the financial realities.”

Under the new ownership, the West Alabama Women’s Center plans to expand the services offered at the clinic over the next several years to cover full-spectrum reproductive health care. This too may signal another shift in modern abortion care. Yellowhammer plans to use a model similar to that of CHOICES in Memphis, which was one of the first clinics to bill itself as a reproductive health care center rather than strictly an abortion clinic. “Because our focus is as a reproductive justice fund, there is a whole host of other things that we are interested in,” Reyes says, “including comprehensive reproductive and sexual health care, continuation of pregnancies, trans-affirming health care.”

These kinds of changes, particularly in the Southeast, are crucial in this moment. Abortion access in the Bible Belt has been whittled down significantly and has become a major battleground in the fight for abortion rights since a wave of bans swept through the region a year ago. While all those laws have since been temporarily blocked in federal court, states in the region more recently tried to use the coronavirus pandemic to reignite the fight over abortion access. And over just the next few weeks, the Supreme Court is set to rule on an abortion rights case that could open the door to more restrictions in 15 states, Alabama included; a new analysis from Guttmacher, a research and policy organization focused on reproductive health care, estimates that the clinic in Tuscaloosa would be one of only two clinics that could withstand that pressure in the state.

“This gives us the chance to try to rework the health care system and provide a model for what health care in this country should look like,” Reyes says. “I think that running this clinic and having this knowledge about how the health care system works and using that to our community’s advantage will help us create some really great policy ideas, too.”

Correction, May 15, 2020, 3:53 pm: This article has been corrected to reflect that Yellowhammer is not the sole abortion fund in Alabama. We regret the error.